Adams nearly put the B-class on pole at Mosport 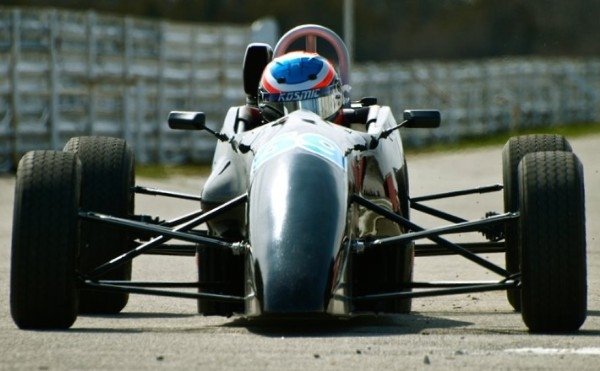 While it took until the midpoint of the season, the Ontario Formula Ford Championship definitely found a way to bring the winning ways of Michael Adams to a halt over the weekend – mechanical failure and monsoon conditions! Those were the circumstances that took the rookie out while leading both Saturday and Sunday at Mosport, yet, strangely, it may have been his best outing yet!

Adams was a fixture at the front of the field in his return to Mosport and was once again a cause for concern to the newer A-class cars while leading the B-class. He qualified on the front row Saturday, missing outright pole position by just a tenth of a second, and nearly repeated the feat Sunday when he clocked third overall. Race action then proved a double disappointment, yet the seventeen-year-old took it all in stride as part of racing when offering up his weekend review.

“Saturday I was just exiting turn five and shifting from first into second when BAM! The drive shaft broke right where the spline enters the tripod for the CV joint,” Adams said. “It was a shame. Qualifying had been awesome and I actually had the pole until the last lap. I was happy with that. Then I was having so much fun being able to race with Trent (Hindman) and Keenan (Harris) once the race started. Those two are both fantastic drivers, fast and clean. They will give the width of a car, no more, no less. I was really impressed with how the three of us were running wheel-to-wheel with no hacks and no squeezing, just hard, clean racing. The way it should be!”

Of course, Adams retired from the fun working lap eleven of fifteen with the drive shaft failure leaving Moss Corner, but the trio was right back at the front of the field on Sunday and took up where they had left off. Adams qualified third on day two, wringing the absolute best out of his 1992 Van Diemen, and after an early dice for position had established himself comfortably in second when Mother Nature introduced a new variable: rain. There was enough to close the course due to flooding during parts of the day, and after the Formula Ford race began in dry conditions, rain began to cycle back in before the end of lap three.

“The rain was getting worse by the second and when I crested the top of the hill on the back straight it seemed to be at its worst,” Adams said of torrential conditions that erased many in the field on Sunday. “I was off the throttle, but just aquaplaned off the end of the straight. It was raining so hard! I was a passenger before I even saw the corner – the car just refused to turn. I can say you really don’t realize how fast you’re actually going until a tire wall is ten feet in front of you!”

The conditions created mayhem with cars off course in multiple corners, three of the top five included, and the race was stopped shortly after. Adams was left nosed into the tires outside of turn eight, and for the second-straight day had retired under extenuating circumstances. Despite the end results, the Flagship Racing crew was left drawing on a number of positives at the close of the weekend, and now looks forward the championship resuming on Labour Day weekend.