@MeguiarsCanada • @Meguiars • @MotoramaShow • TORONTO, ON // FEBRUARY 12, 2015 • Meguiar’s will be featured as a highly visible partner at the inaugural Motorama Custom Car & Motorsports Expo March 13, 14 & 15, 2015. Along with a display of Meguiar’s-prepared classic automobiles, the company will present every Motorama visitor with an official ‘show bag,’ complete with a sample of Meguiar’s product.

“Meguiar’s will feature the new Gold Class Quick Wax and Quick Detailer, as well as a new Carpet and Upholstery Cleaner in the booth at Motorama,” says Michael Patterson, Sales and Marketing Manager for the Meguiar’s brand at 3M Canada. “Shows such as the Motorama Custom Car & Motorsports Expo give us an opportunity to interact with the people who know and love Meguiar’s, and introduce the products to new fans.”

Throughout the Motorama expo at the International Centre in Toronto, Meguiar’s technicians will be offering demonstrations of their products, while showcasing the trio of new products.

Originally created for professional use, an overwhelming demand from the public led Meguiar’s to launch a line of consumer-based products, in 1973. Currently, Meguiar’s produces over 300 different cleaners, polishes, waxes, conditioners and protectants, along with a line of tools and applicators, for cars, boats, trains and airplanes. 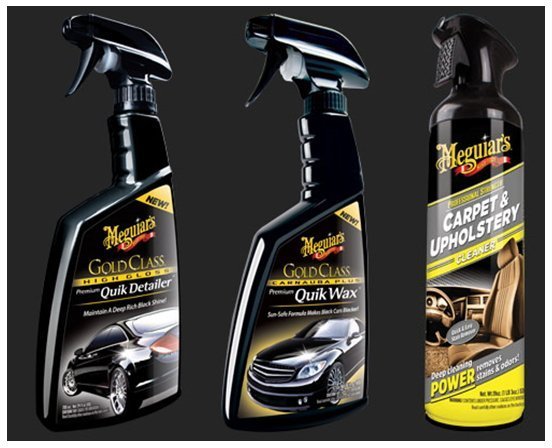 “Custom car shows are a natural fit for Meguiar’s,” says Patterson. “From the very beginning, Meguiar’s have been active participants in the collector car hobby, and we’re thrilled to participate as a show sponsor and as custom car enthusiasts.”

In addition to being a respected worldwide manufacturer, Meguiar’s has built a reputation for providing in-depth training through its on-site technical facilities, mobile training centres, detailed technical data sheets and training videos.

Starting out as a producer of a simple furniture polish, founded in 1901 by Frank Meguiar Jr., Meguiar’s has grown to become one of the world’s largest surface care product companies. Today, the name Meguiar’s is closely associated with the automotive care market, and is well known to those in the hot rod and custom car communities.

ABOUT MEGUIAR’S: For over 110 years, Meguiar’s has provided Car Crazy people with specialized state-of-the-art formulations for making every car’s appearance show car perfect. Meguiar’s provides high performance products for every automotive surface. We help owners have pride in their ride and share a passionate bond with other global car enthusiasts. For more information, please call Meguiar’s at 800-347-5700 or visit Meguiar’s at www.meguiars.com.

ABOUT THE MOTORAMA CUSTOM CAR & MOTORSPORTS EXPO: The inaugural Motorama show takes place March 13, 14 & 15, 2015 at Toronto’s International Centre, adjacent to Toronto’s Pearson International Airport. With a footprint of almost a quarter-million square feet, the show will be Canada’s biggest late-winter celebration of automobiles and motorsports. For tickets and information about the show, including sponsorship and exhibitor opportunities, schedules and more, call (416) 962-7223, or email info@MotoramaShow.com. The show’s website is located at www.MotoramaShow.com.