In the February 12th edition of Spencer Lewis’ Inside Track Motorsport News Short Track Notebook, we sit down with OSCAAR Super Late Model up-and-comer Corey Jones, take a sneak peek at what Josh Gruntz and Trevor Collver have been working on all off-season and unveil Gary Passer’s new look for the 2015 World Series of Asphalt at New Smyrna Speedway.

We recently had the chance to sit down with OSCAAR Super Late Model up-and-comer ‘Twinkle Toes’ Corey Jones for a 1-on-1 interview. The Baden, ON driver tells us about his (late) start as a Karter with the Waterloo Regional Kart Club, his time spent with the Canadian Vintage Modifieds, his integration into becoming one of the youngest drivers on the Super Late Model roster and his hopes for the future. Click here for the video interview and follow Corey and his team via the official Corey Jones Racing page on Facebook.

OSCAAR Modified Tour competitor Josh Gruntz has spent his off-season in the race shop, preparing for a return to tour competition in 2015. The Peterborough, ON driver destroyed his team’s lone chassis in a heavy crash at Peterborough Speedway in 2013. Now, the former Thunder Car competitor is ready for a comeback.

Here’s our first look at Gruntz’s ride as he readies himself for a 2015 schedule that will see him compete in select OSCAAR Modified Tour events at Sunset, Peterborough and Full Throttle Motor Speedway. In addition, Gruntz hopes to make a number of appearances with the Ontario Modified Racing Series. Marketing support for Gruntz’s return will come from Dent Dynamics, Dan McHattie Racecars and Triben Media. Fans can stay up to date with Josh on Facebook via the official Josh Gruntz Racing page or on Twitter @Gruntz31. 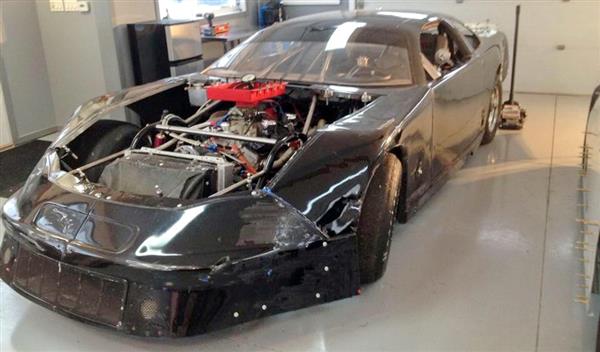 Delaware Speedway Super Stock competitor Trevor Collver has been hard at work in recent weeks, preparing for his Pro Late Model debut with the APC United Late Model Series in 2015. The Lucan, ON driver – a graduate of the Delaware Truck division – will make select appearances on the tour for car owner Allan Gold in a chassis formerly campaigned by Delaware front-runner Jamie Cox. Collver has sent us these photos to offer a sneak peek at what the team has been up to, as they continue to prepare for their first tour event in the Spring.