(7 September 2021) – Mooresville, NC: As the IMSA WeatherTech SportsCar teams make their annual visit to the west coast of the US, everybody is fully focused on the championship titles.

Laguna Seca, with its famous Corkscrew turn, is one of the most iconic race tracks in the world and never fails to deliver a great sportscar race. For Harry Tincknell, racing the #55 Mazda RT24-P at Laguna Seca is a childhood dream come true.

“I can remember driving around Laguna on Gran Turismo on the Playstation when I was six or seven years old,” said Tincknell. “So it is always special to go there as a real life race car driver, competing in one of the hardest sportscar championships in the world.

“We did well last time out at Road America and closed everything up at the top of the championship,” he continued. “We know that we’re basically equal on points with the #31 and the #10 is just ahead so we have everything to play for. It’s a three horse race now so we need another strong and consistent run. In the past couple of years we haven’t been as strong as we hoped at Laguna in terms of the results but last year I had the fastest stint averages in the race so we know we can get better results there.”

Oliver Jarvis is equally aware of the need to keep his eyes on the prize at Laguna Seca.

“After a strong result at Road America we head to Laguna with the championship closer than ever,” said Jarvis. “As a team we have had mixed results at Laguna in the past and it is a very difficult race to predict ours and our competitors’ relative performance. Regardless we head there as prepared and motivated as possible with our sights firmly set on trying to take our second win of the season and keep ourselves in the championship fight.”

This weekend the Porsche Carrera Cup North America will provide the biggest challenge yet for its title contenders. A triple-header race event at Indianapolis Motor Speedway means that Seb Priaulx has the opportunity to score a huge number of points and fight his way back to the top of the standings in his rookie Carrera Cup season.

Priaulx sits in second place in the championship standings, just seven points shy of his Kelly-Moss Racing team mate, Kay van Berlo. Each wants the title as much as the other, which makes for some very close and very entertaining racing for the race fans. 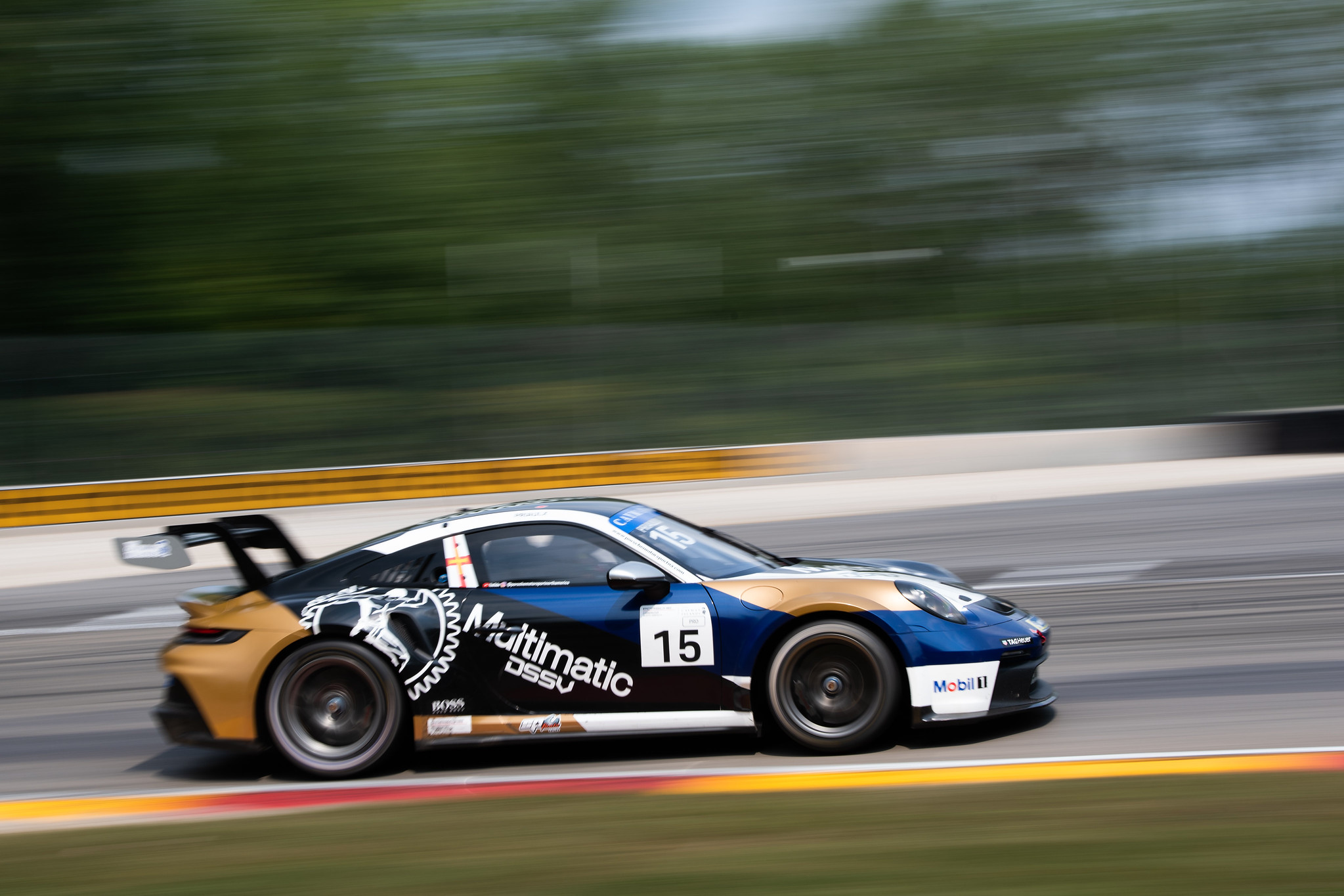 “It has to be a maximum attack weekend for me as there are a huge number of points up for grabs with the three races,” said Priaulx. “We had a productive test at Indy last week so we have a good base set up for the race weekend. I’m really looking forward to getting back out there and giving it all I have.”

Multimatic Motorsports boss Larry Holt said: “With three races to go it’s really tight at the top of the points battle. We closed the gap to the #10 at Road America but now have the #31 right on top of us. It’s a three horse race and we need a good result this weekend. Laguna hasn’t historically been the Mazda’s strongest venue but we’ve spent a lot of time trying to get on top of that. Additionally, strategy will play a massive role as there aren’t a lot of safe places to make a pass. Unfortunately Seb is competing with the Porsche Cup car 2,300 miles away, in Indianapolis, so we will only be able to watch him on the live stream. It’s a triple header weekend for Porsche Carrera Cup North America, so a big challenge, but I have great confidence in Seb’s skill and desire to grab some good results. Another busy race weekend for Multimatic Motorsports.”