SATURDAY
DJ Christie became the second driver to claim multiple Knights of Thunder 360 Sprint Car series wins with a victory on night one of the Labour Day Classic at Brighton Speedway.

Ryan Turner and Christie started the 25 lap A-Main on the front row, and Turner got the early lead. Action heated up all through the field in what turned out to be a nonstop race completed in less than seven minutes. Christie got the lead on lap 11 and stayed up front for his second win of the season. Turner continued his consistent season by taking the runner-up spot.

Jim Huppunen and Jordan Poirier continued their season-long contest as both moved up from row four and five to race for the third spot late in the race. Huppunen took the spot back from Poirier and claimed the final podium position, followed by Poirier, and Liam Martin.

Several drivers were unable to make the trip to Brighton due to last-minute complications. Most notable in his absence was Aaron Turkey, who gave up fourth place in the championship standings.

SUNDAY
Jim Huppunen and Jordan Poirier have dueled all season in the Pinty’s Knights of Thunder 360 Sprint Car series, and they put on another entertaining show on Sunday night at Brighton Speedway. In the end Huppunen emerged with the victory, his second in three career Brighton races.

Jamie Turner and Huppunen were the front row starters for night two of the Labour Day Classic weekend, while Poirier started 10th for a second consecutive night. The race had a halting start, as Ben Silliker stopped on track just before the green flag, and Nathan Jackson spun off the track in turns one and two to bring out the yellow flag on the first lap.

Turner took the initial lead when the race started, but Huppunen dove low and took the lead in turns three and four on lap one. Huppunen opened a lead while Alain Bergeron took the second position, and Poirier charged forward. Huppunen’s gap shrank as he attempted to negotiate heavy traffic, and he narrowly avoided disaster when Jackson spun in front of him just before the halfway mark. The resulting yellow flag was a double-edged sword for Huppunen; clear track on the restart was helpful, but Poirier restarted third and quickly overtook Bergeron.

Huppunen doggedly stuck to the low groove while Poirier used the high side to race wheel-to-wheel with the leader. The two drivers raced side-by-side for several laps and Poirier briefly edged ahead before Huppunen retook the top spot with nine laps remaining. Both drivers encountered heavy traffic as the race wound down, and Cory Turner began to reel them in after making his way to third. Turner ran out of time though, and Poirier’s last lap effort fell short as Huppunen won by three-tenths of a second. 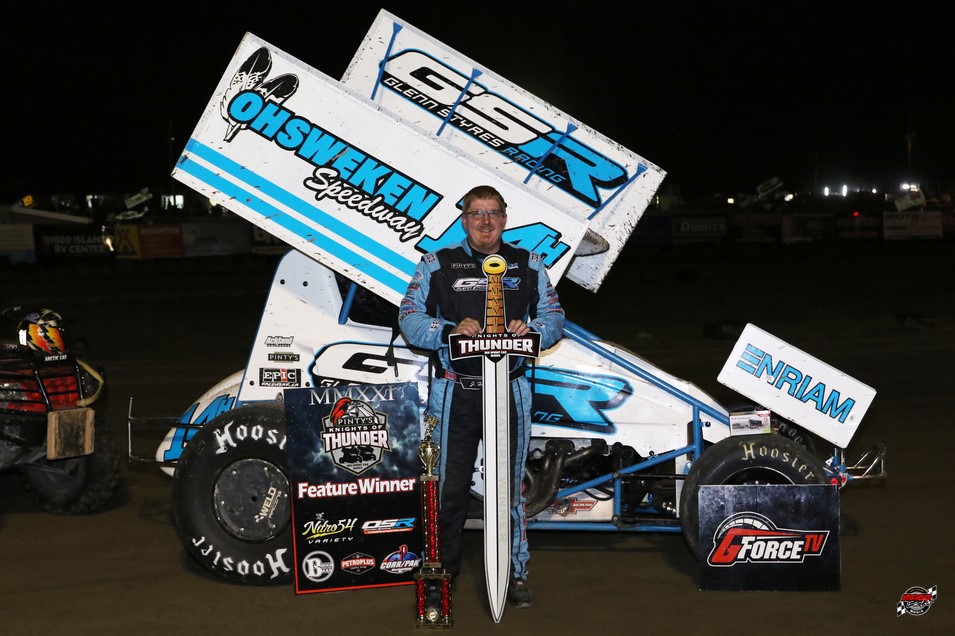 The Pinty’s Knights of Thunder series will next be in action on Friday, September 10 at Humberstone Speedway, and Saturday, September 11 at Merrittville Speedway. Visit www.knightsofthunder.com for more information.

About the Pinty’s Knights of Thunder Sprint Car Series: Founded in 2021, the Knights of Thunder series is a traveling winged 360 Sprint Car tour based in Ontario, Canada. Each points-paying event on the 2021 schedule will pay a minimum of $2,000-to-win and $250-to-start, and selected events will be broadcast live on GForceTV. The championship winner will be rewarded with $5,000 and a Pinty’s VIP package for the 2022 Bristol Dirt Race, while 10th place in the championship standings will pay $1,000. The 2021 Knights of Thunder Sprint Car Series is made possible with the support of Pinty’s Delicious Foods, Corr/Pak Merchandising, Stoneridge Specialty Insurance, Hoosier Tire Canada, Burger Barn, Nitro 54 Variety, Strickland’s Brantford Chevrolet, and EPIC Racewear. Visit www.knightsofthunder.com for more information.