BOWMANVILLE, ON – Shawn McGlynn (#81) of Kitchener scored a perfect night in race number three of the 2012 Lucas Oil Sportsman Cup at Canadian Tire Motorsports Park on Saturday, July 14. The hat trick started in time trials for the CanadianForces.com 100-lap feature, as McGlynn turned a lap of 22.568 seconds the fastest of the qualifying sessions.

With the Blast Floor Coatings Challenge having rolled over every race this season, McGlynn elected to attempt to win from the back of the pack, and try and claim the cash prize that had been building. Amanda Connelly (#16) of Hampton, qualified second, but it was two-time defending champion Jay Doerr (#43) of London, that drew the pole in the ‘Fast Five’ draw after turning the fourth fastest time of the session. 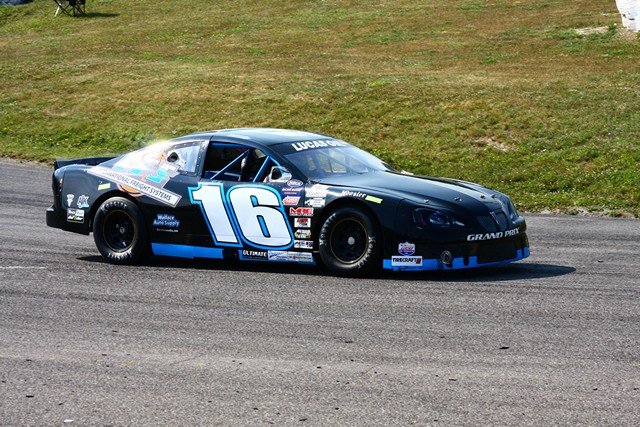 The early section of the race was dominated by Doerr, as he led into the races second caution flag on lap 40. Following a short cleanup, Connelly, who had been running second to Doerr restarted beside the leader on lap 43. As the pair came through the gearbox, Connelly was able to clear the Jay heading into turn one and took control.

McGlynn was methodically picking his way through the back of the field, showing up in sixth-place by lap 10. The first yellow on lap 30 saw Shawn fourth, and by the time Connelly made her move, he was close enough to the front to follow her through for second. Josh Wood (#66) of London, advanced to third, with Doerr settling in fourth. 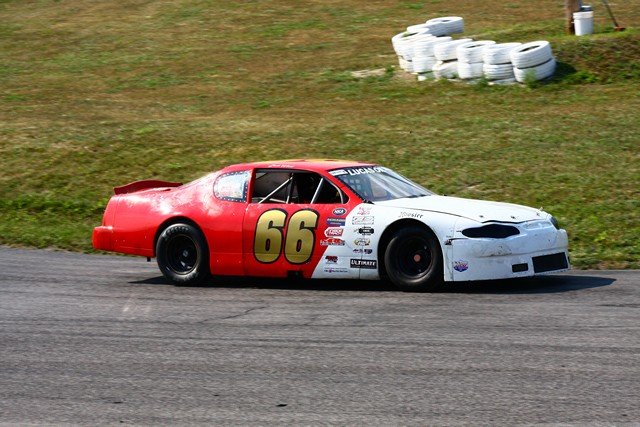 Connelly tried to keep McGlynn at bay, but on lap 47 Shawn took the lead and started to pull away from Connelly and Wood. As the laps went by it looked like McGlynn had all but locked it up and the pair behind him were destined to fight for second until the yellow flew with less than 10 laps to go.

On the next restart Connelly started to pressure McGlynn and on lap 95 she poked the nose of her car in front before the final yellow flew on lap 95. McGlynn took command on the final five lap sprint to the finish, but Connelly wasn’t done, as she pressured McGlynn. On the final laps, she made a last ditch on the inside, but came up less than a car length short, while McGlynn capped his perfect night in points, and boosted himself to the championship lead.

McGlynn spoke about his first win of the season: “It was awesome racing with Amanda out there. We were side by side a number of times and didn’t even touch. It’s also her home track, so that made it good to beat her. We started spinning the tires at the end, and were just out of rubber and she was there,” he said. “We took the challenge at the start of the race, even though my dad [crew chief Roger McGlynn] told me to start at the front. I thought I had a car I could drive to the front, that’s how good it was. I followed the guys’ advice and took it easy coming through the back of the field, and I think we gave the fans a show. They were all on their feet at the end. We should also be in the points lead, and I really want to win the championship again this year.”

For Connelly, coming off a win at Delaware in the previous event, she was thrilled with finishing second in front of her hometown crowd, “We were loose all night, but it was pretty good on restarts and on the short runs. I had some runs at him off turn four, but I couldn’t hold it on the inside,” she said. “It was great racing with him, and I don’t think either of our cars have a single mark on them. I really wanted to win this one tonight because have a lot of friends and family here – this is our home track.”

Wood, who had a great seat to watch the race for the win posted another podium finish, winding up third. With the finish, Josh vaulted to fourth in the series point standings, and still in the title hunt as the series approaches the halfway point. Wood said, “We worked at the car tonight, but it was a handful, and we would’ve been happier getting a win tonight.”

Tim Tolten (#3) of Guelph had an impressive run, finishing fourth, and climbed five spots in points to sixth, while Bob Merrifield (#43) of Belle River, rounded out the top-five in a solid run.

Doug Cathcart (#48) of Ottawa, posted a season best sixth-place finish, while two-time defending champion Doerr wound up seventh. He fell to second in points, but just six markers behind McGlynn. Chad McGlynn (#18) of Kitchener, qualified a season best fifth and finished eighth, while Steve Moore (#45) of Toronto, and Jason Meyer (#93) of Tillsonburg, rounded out the top-ten.

The Lucas Oil Sportsman Cup Series presented by Tirecraft will be back in action on Saturday, August 11, at Peterborough Speedway. It will be event number four of seven on the year and is the series’ only 2012 appearance at the fast, high-banked 1/3th-mile speedway.

Release and photos from Jamie Maudsley and www.maudsleymotorsports.com.