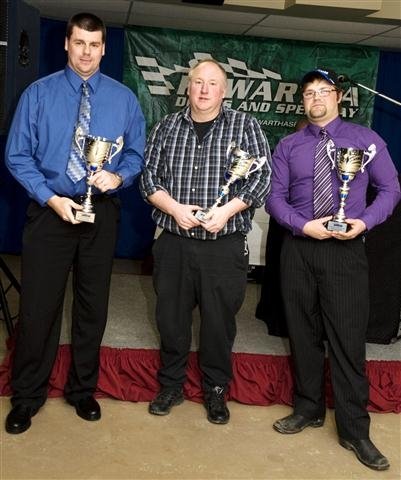 FRASERVILLE, ON – What do you do to get noticed?  Are you able to step-up when it’s your turn to shine?  Drivers in Kawartha Speedway’s 3 regular classes are some of the best in the business.  Whether they’re running in the Hasiuk Trailer and Container Rental Mini Stocks, Better Carpet Thunder Cars or NAPA Auto Parts ACT Late Models, there is no shortage of stellar competition at the province’s premier motorsports facility.  At the year’s awards banquet, the track recognizes a most improved driver in each division.

Brad Martin finished Kawartha Speedway’s 2010 season in 7th spot when the final points for the Hasiuk Trailer and Container Rental Mini Stocks were tabulated.  The life-long resident of the almost fictional sounding Plainville, Ontario had a respectable first season of competition, but always knew he could do better.  When the 2011 campaign got started, Martin arrived at the Fraserville facility with a new attitude and increased self confidence.

“I was pretty tough on myself during the first year,” said Martin.  “I put so much emphasis on where I started a race instead of where I was going to finish.  Finishing the feature 15th – like I did on the opening night – would have affected me for weeks last year.  This year, I just put it out of my mind and came back with a 2nd place effort the following week.  Even tough there is always room to improve, my first career win and a 4th place point finish is a good place to start.”

Andy Ford has been a Friday night Fraserville fixture for more than half a decade, but entering the 2011 program he was still chasing that elusive main event victory.  A freelance videotape editor, Ford is what most would consider a throwback runner.  His #93 Better Carpet Thunder Car machine was built and maintained by his brother Dan in garage alongside his home in Grafton.  Ford, from Scarborough meets his brother at the track for every show.

“I’d had some solid runs in the past, but never managed to get to the winner’s circle,” said Ford.  “In the last couple of years I’ve travelled to some different tracks and I think that experience made me more of a racer than just a driver.  Running the street stock nationals show at Bristol in 2010 taught me a lot and opened my eyes to some of the things we’d been doing wrong.  Kicking-off 2011 with a second place effort and then back-to-back wins in the next 2 shows picked-up the attitude of the entire team.”

His performance during Kawartha Speedway’s 2011 season may have been enough to erase Bryan Mercer’s memories of the 2009 and 2010 campaigns.  After scoring a 4th place point finish in 2007 and 5th in the standings a year later, the Port Hope veteran was on the outside looking in when the top 10 positions were tallied in the next 2 years.  A 3rd place run opening night was a sign of things to come, followed by a win in the first extra distance show 2 weeks later and a history making performance in the Summer Sizzler made everyone take notice of the #81 NAPA Auto Parts ACT Late Model Chevy.

“I knew the team had the ability to turn some heads.  It was just a matter of showing everyone else what we were capable of,” said Mercer.  “The car was fast out of the box and everything we did during the first events of the year seemed to make it better.  My confidence had taken a beating during the last 2 years, so it was great to be able to turn things around and pick-up a couple of very impressive wins.”

Kawartha klips:  Next on the agenda for the Fraserville, Ontario 3/8th mile oval is the 3rd annual Long John 200 endurance event Sunday, February 5th.  The complete 2012 schedule can be found by checking www.kawarthaspeedway.com… The track will also be part of the Canadian Motorsports Expo – presented by Inside Track Motorsport News – February 10th, 11th and 12th at the International Centre in Toronto.  See www.CanadianMotorsportsExpo.com for details.