Mike Lichty is the King of Wings

OSWEGO, NY – Mike Lichty, coming off a convincing ISMA win at Stafford Speedway on June 29, rolled into Oswego to stage a coup to reclaim his King of Wings crown from two years ago. After piloting the PATCO Transportation 84 to a new track record of 15.019, the all-time fastest lap at the famed Port City oval, it was evident that Lichty was on his way to his goal. Starting fifth on the grid of 28 starters, Lichty drove by polesitter Tim Ice on lap 12 and headed to the King of Wings throne.

The race saw previous Oswego Shea Super Series dominators Chris Perley and Lou Cicconi, uncharacteristically out of the race before the checkered, but a couple challengers in Dave Shullick Jr. and Ben Seitz tried their best to check up the high-flying Canadian. The win was a fifth-career ISMA win for Lichty and a second in the King of Wings event. 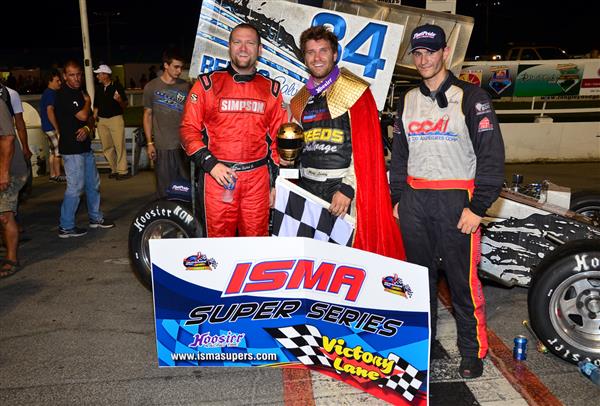 Needless to say the celebration in victory lane was nothing but regal. Mike proclaimed in the post race interview, “This was a helluva run. I love coming to this place. We won this race two years ago. The car was just on rails tonight. We’ve been quick all year here, but we just haven’t had the finishes at this place. We really put it to them two weeks ago at Stafford. The car was phenomenal and to come back here and run 15.0’s is great. I really wanted to make it into the 14.9s. I really have to thank everybody on this team. They work so hard. They give me a great car. Thanks to everybody at Reed’s Salvage, my father with Patco Transportation. This is Deanna’s first time at the track when we’ve won. Usually she’s bad luck but we won. I think she’s turning it around. I have to thank my beautiful girlfriend Raven, Dickie, Ryan, Zach at the shop, just everybody who puts in the effort on these cars. They work awesome and it shows. Level Performance makes good horsepower. And, I just can’t thank the fans enough. 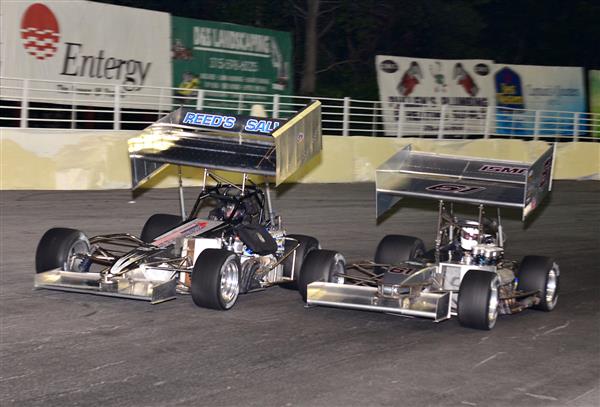 Mike went on to describe the last lap restart, which put DJ Shullick and Seitz right on his tail after running pretty much unchallenged for the entire race. “I knew we had a good car and at the end had some tough guys behind. Hats off to DJ there for bringing a brand new piece, starting 12th and finishing second. I hated to see Lou and Perley have their troubles because it probably would have been a really good battle between all of us. Hey, we’re back in victory lane and that’s what it’s all about.”

Second generation Shullick, with a new Jim Bodnar mount underneath him, was content with his run. “This is the third race we’ve had on this car. We won last week at Sandusky. We qualified second today and we were just going to take what it gave us. To start 12th and come away with a second is something. I know there was some attrition there, but hats off to Mikey. He had a good run and a good car. I’d like to thank Kevin and Kim Enders for their support, Elios Financial Group and Jim Bodnar for building a hell of a piece. I’m just the guy who gets to turn the steering wheel. Thanks to my dad, Coco and everybody who works on the car and makes it happen for us. This car has some different characteristics. A lot of cars were slowing down at the end but this car actually seemed to pickup a little bit. I don’t think on the last restart that we had anything for Mikey. It was a good run for us and we are happy. It was a good run for us and we are anxious to head to Sandusky’s Hy-Miler in two weeks.” 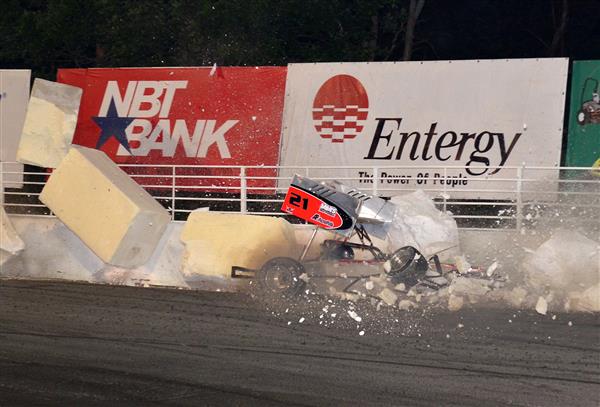 Ben Seitz, who claimed a Chaudiere ISMA win in June, continued on his way forward. “The car was really good tonight. We didn’t really have anything for Lichty. He was in a different time zone. We’ll take third. I’d like to thank Brian Allegresso for his help. And, of course, thanks to S.M.Lorusso & Sons, Lorusso Heavy Equipment and Cape Cod Aggregates. They make this whole thing happen. My crew, Dickie Bien, everybody has been working hard. We’re starting to get a lot more top fives and top threes this year so things are looking good. I’m looking forward to the 100-lap Hy-Miler at Sandusky. I always seem to run well in the longer race.”

An excellent field of 32 potent supers graced the Oswego pits and after time trials it was apparent that this was to be a speedy King of Wings 50. Eighteen cars clocked in under the 16 second mark with Lichty the quickest at 15.019, which broke all previous records. Unfortunately, the quickest car of the day, Jon McKennedy’s 79 was packed up prior to time trials and left the track without a chance to show his stuff. A newly refreshed motor was leaking water and the team did not want to chance running it. Ironically, as McKennedy left, Gary Morton and Dave McKnight were pulling into the pits to keep the car count the same.

Three heats and a consi established the 28-car starting field, and handicapping put Tim Ice and Ray Graham Jr. on the front row. Ice wasted no time claiming the point but a quick yellow slowed things on lap 3.

The restart saw previous Oswego winner, Lou Cicconi move into third behind Graham. As Ice tried to scramble away, another yellow bunched the field and unfortunately for Cicconi, it was for him. The 71 slowed and went into the pits. Lou said later it was something in the motor, possibly an ignition problem.

It was Ice, Ray Graham, Lichty, Seitz, Jeff Locke, Chris Perley and Dave Gruel nose to tail on the restart and try as he might, Ice could not hold his lead for long. Lichty moved by Graham and then passed under the 65 in turn one for the lead on lap 13. He was never seriously challenged, despite several other cautions along the way.

Lap 15 saw a yellow for Bob Magner who rejoined the field at the tail.

Out front on the restart, Lichty moved away from Ray Graham while Ice was melting from the pressure from Perley and Seitz riding side by side behind him. Perley finally claimed fourth shortly thereafter.

By the halfway mark, Lichty had put a couple slower cars between his 84 and Graham while the 61 tried to follow as close as possible. Perley moved into third past Ice and now was on Graham’s tail.

A lap 30 yellow saw several incidents occur. First the 61 slowed and headed to the pits out of second place. Then the Jedrzejek-Soule 32 started smoking and was pulled over by tech. Timmy J was sent to the pits leaking oil or rear end grease, not to return. Bob Magner pitted and was done. And, Bob Dawson also pulled the 28 nose in. The 61 did come back to the rear but only to exit the race for good on lap 33. 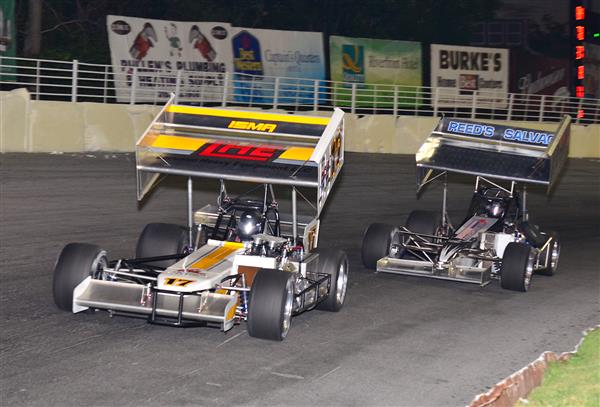 On the restart, Lichty sailed away from Perley, Seitz, Shullick and Ice, the latter two having at least one lap car to get around. 2012 King of Wings Dave Gruel was still in the hunt behind Ice as the leaders wove in and out of lap traffic.

With ten laps to go, yellow flew for the second Vic Miller machine as Chris Perley ended up in the inner hub of turn four after an attempt to pass one of the slower cars that Lichty had been lapping.

Perley, whose long career has seen very few dnf’s due to crashes, was obviously disappointed after his 11 was just coming alive. “We were struggling with the car all day. This new car is still fighting us. It was better than I thought in the feature. I probably didn’t have anything for Mike. When I started behind him, I let him go away. I wanted to carry my right front and not tear it up before I started racing. However, lap cars just didn’t seem to hold a groove. I’m a little disgusted at that. I expected our team to fall off a high horse sometime, but I didn’t expect both of us to be where we ended up tonight. My car is bad. I don’t even know if we are going to have it back for Labor Day.”

This restart now saw action all over the track as only ten laps remained. Lichty sped away easily as Seitz and Shullick began a torrid battle for second. The top three were a half track away from Ice, Locke, Kody Graham, Eddie Witkum Jr., Johnny Benson, Rob Summers, Alison Cumens and Mark Sammut still all battling in the lead lap.

The last and final yellow came on lap 49 when Kody brushed with the same car as Perley and was sent hard into the wall in between 1 and 2.

The green-white-checkered scenario was not a threat to Lichty’s reclamation of the King of Wings crown as he pulled away smoothly from Shullick, Seitz, Ice and Locke one more time. And, those five crossed under the checkers in that order.

Ice, who has had some good runs go bad this year, was okay with a fourth. “When you start on the pole you always like not to go backwards but I guess the only way you have to go if you don’t win. We got real loose about halfway going into the corner. Going to the outside by the lap cars was even worse. I lost a few spots that way. But a couple fell out ahead of me and we moved back up. We had a different wing on this time, more like Vic, Chris and Louie do. That’s the wing that came on the car. We’re experimenting with that trying to get it right. We just need to get a different setting with that and I think we’ll be better. We qualified better than we ever have here and finished 4th. All in all it was a good day.”

Locke, in the same vein, felt good about a fifth after some rough starts. “It’s a relief to finish fifth. We’ve had some bad luck this year. And, to come home with a top five makes me really happy. I shouldn’t be happy with fifth but the way we’ve been running this year with the motor problems and all, I am. Everybody’s been working hard. Thanks to Brian Allegresso, Jerry Martel, Doc Hathaway and my father. I couldn’t do it without them. I just get to drive and I’m having a blast. It’s great to come home with a good finish. We’ve been having issues. The car was better today but we are still struggling on the restarts. Toward the end of the race, those restarts hurt me the worst.”