'The Bully' Dwayne Baker Became The First Ltd. Late Model Driver In History To Earn Back to Back Autumn Colours Classic Wins

Moments after securing his second straight Autumn Colours Classic victory, Ltd. Late Model heavyweight Dwayne Baker offered his post-race musings. The Stayner, ON veteran was quick to credit his Port City chassis, as well as the work of the legendary Junior Hanley and Dwayne’s son Kyle. The video can be seen here. 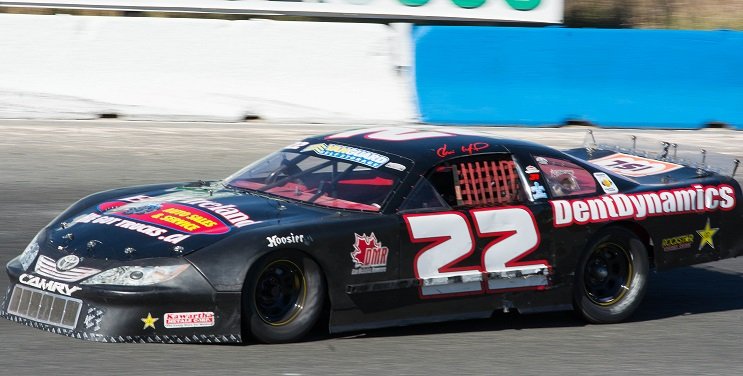 ‘Handsome’ Chris Mitchell (above, by Thompson Photography) ran up front all afternoon long in the 75-lap Ltd. Late Model A-Main, and was within a hare’s breath of putting his Rockstar Energy Drink-backed ride in victory lane after leading a multitude of laps through the midway portion of the event. Mitchell ultimately settled for 2nd behind eventual winner Dwayne Baker, and was kind enough to share his post-race thoughts with us. The video can be seen here.

Barrie Speedway regular Travis Hallyburton (above, by Thompson Photography) started outside pole in the 50-lap Thunder Car A-Main at the Autumn Colours Classic, and ran strong all afternoon long until late race contact with fellow contender John Baker Jr. removed him from contention. We caught up with Hallyburton in post-race tech where he explained how he saw the incident and offered a possible hint as to his 2014 plans. Check it out here. 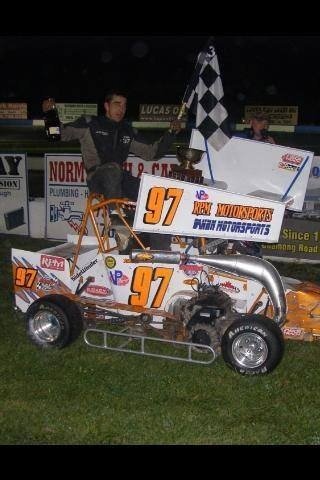 2013 Hurricane Midgets champion Robin McLean has made sure his upcoming 2014 season will be as busy as possible. The Cookstown, ON driver will return to defend his Hurricane Midgets championship with a brand new Stryker Chassis, manufactured by Hurricane Midgets standout turned OSCAAR Modified regular Mike Westwood. In addition, McLean has announced that he will compete with the Ontario Pro Challenge Series on off-weekends, after purchasing a chassis from former OPC regular Jason Davidson. Fans can follow McLean as he prepares for his busy season all Winter long, via his Twitter account @Robin0097.