In the November 26th edition of Spencer Lewis’ Short Track Notebook, we bring you up to date on the latest Thunder Car champion to hit the Ltd. Late Model ranks, one of the OSCAAR Modified Tour’s brightest prospects, a Sauble Speedway front runner and one of the most popular Bench Racing episodes of all time.

2012 Kawartha Speedway Thunder Car champion Matt Spence has confirmed he will make his rookie foray into the Limited Late Model division in 2014. The 12-year veteran will compete fulltime at Peterborough Speedway in 2014, piloting the same chassis that Bryan Sudsbury drove to a championship in 2012. Matt’s father Tom will return to fill the role of Crew Chief, and the team has announced they have re-signed Sellmunity.com, NAPA Pineridge Auto Supply, Graphic Lettering and Durham Furnace Heating & Cooling to provide marketing support throughout the 2014 campaign. “It’s been awesome racing in the Thunder Car division for the past 12 seasons but we’ve accomplished all that we set out to do in that class. Great racing and a great group of people, but we’re looking forward to the new challenges that the Ltd. Late Model division can supply”, remarked Spence. The Bailieboro, ON driver has already begun to prep his newly acquired ride for 2014, and plans to debut its new look in an upcoming Short Track Notebook. 2013 OSCAAR Modified Tour Rookie of the Year Branden Bullen (above, by Thompson Photography) has announced he will return to the tour for another fulltime effort in 2014. The Bond Head, ON driver cut his teeth in the Mini Stock division before graduating to the Open Wheel ranks. Bullen’s 2013 season was dotted with a number of top-10 finishes, highlighted by his first career tour podium at Sunset Speedway on July 27th. The third-generation driver, son of former OSCAAR Super Late Model Tour regular Phill Bullen, has announced that Insured Renos will return as a primary sponsor for 2014, but the team is still in search of additional marketing support. 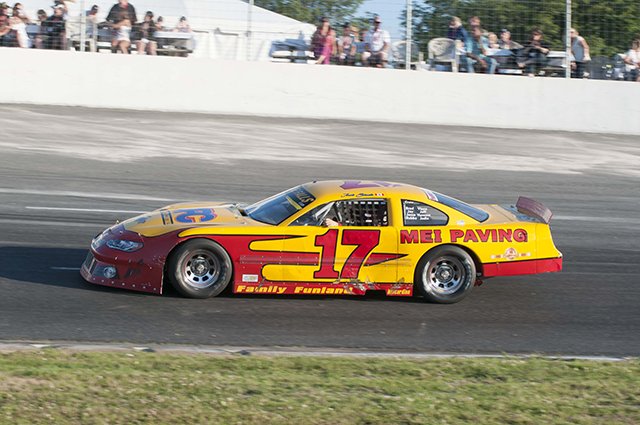 Earlier this summer, we caught up with Sauble Speedway Ltd. Late Model regular Josh Stade (above, by Pamela Guppy). The Chesley, ON driver speaks candidly about competing outside of Sauble, his driving style, his allegiance to Beaverton, Michigan’s Howe Enterprises, transitioning from JCAR competition to full scale Late Models and his possible plans for 2014. Click here for the interview.

If you’re a fan of our popular Bench Racing series, here’s a look back at one of our most popular episodes yet. We sit down with OSCAAR President Dave Gainforth as well as Late Model standout (and 2014 OSCAAR Rookie of the Year contender) Kelly Balson. These two chat all about the popular tour, it’s drawing power, the stars of OSCAAR and what the future could hold for Ontario’s marquee tour. The interview, in full, can be found here.