Flamboro Speedway kicked off the first round of its APC Six Pack Series on Saturday, May 24th. The series – co-promoted with Delaware Speedway – drew 20 of the top Pro Late Model competitors in Ontario, with second-generation veteran David Elliott carving out the victory in his first race since September of 2012.

AD: Get a great Father’s Day gift for the racing fan dad(s) in your life! Click on the banner below to take care of it today.

We had a chance to speak with David this week about his recent triumph; this is what he had to say:

“That may have been the best race I’ve ever ran. This is such a great way for us to start our season. We’re only running a limited schedule this year, this APC Six Pack Series is perfect for us. Unfortunately, we won’t be going to the Delaware races, but we will be at Flamboro to support their half of the Home and Home. We weren’t great in practice, we had to chase the car a little bit. It had a real bad push through the two hot lap sessions, and I actually had to work with JR Hanley over the phone to try and find a remedy for it. He told me if I raise the track bar up on the right rear, the car will come to me by about lap-50 – and that’s exactly what happened. This car was as good as anyone all night long, and in traffic I actually think we were better than anyone. We were able to roll the center of the corner unlike anyone else. The new tire definitely through me for a loop. Coming out here on an 8″ as opposed to a 10″ pretty near had me re-learning how to drive the car. But, we figured it out. When we lined up for time trials and I took a look around, I didn’t think we had a shot at winning. I mean, here I am coming off of a year and a half layoff against some of the best Pro Late Model drivers in the province. I was hoping for a top-5, to win was just incredible. These Delaware guys surprised me, they were very good here. A guy like Matt Pritiko, who I know is good and has a strong car, performed even better than I thought he would. I’m excited for the rest of our season, because I think our car still has more in it” 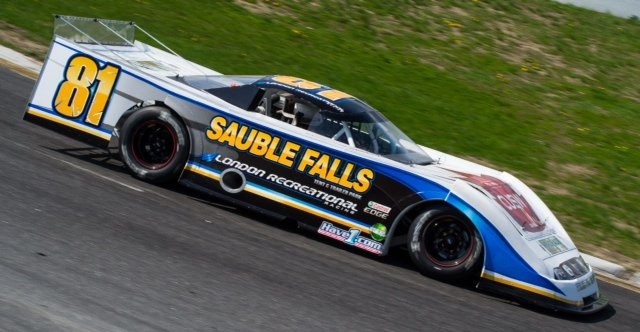 With the OSCAAR Super Late Model tour set to return to action this weekend, fans and insiders have set their gaze on Andrew Gresel (above, by Thompson Photography) as a favourite to win. The Hepworth, ON driver dominated at Kawartha when the Super Late Models rolled into town, and hopes to pull off back-to-back victories in June 1st’s event (see below for event info). Here’s our interview with Andrew post-race after the tour’s season opener at Sunset. Click here for the video and follow Andrew on Twitter @SaubleFalls81. 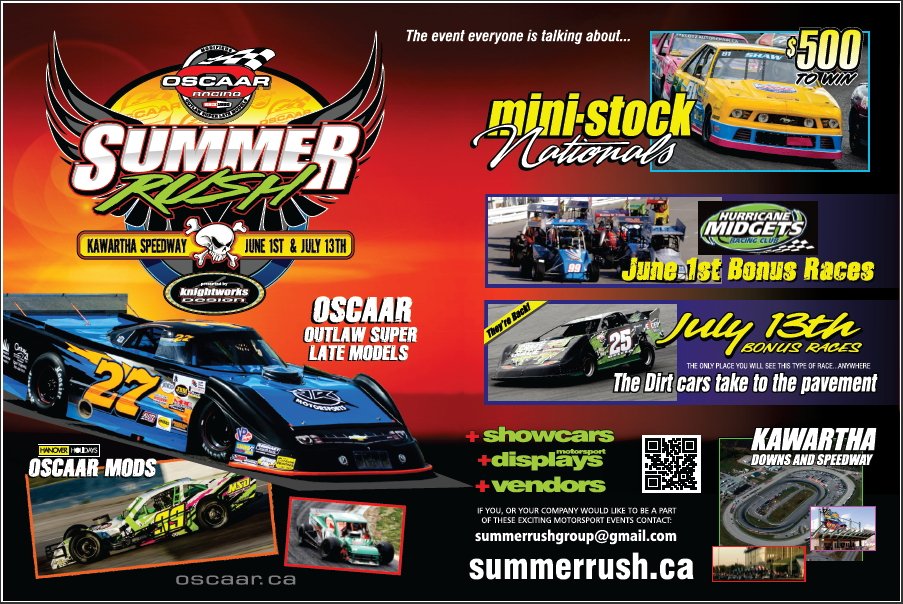 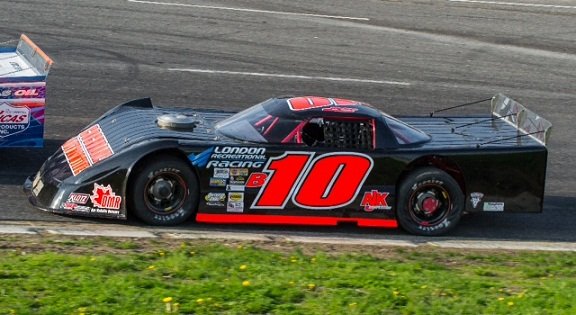 ‘The Crowd Pleaser’ Kelly Balson (above, by Thompson Photography) was the top finishing freshman in the OSCAAR season opener, and hopes to repeat that feat at Kawartha this Sunday. Here’s our post-race interview with the former Ltd. Late Model champion turned OSCAAR Rookie of the Year contender. Click here for the classic 1 on 1 interview. 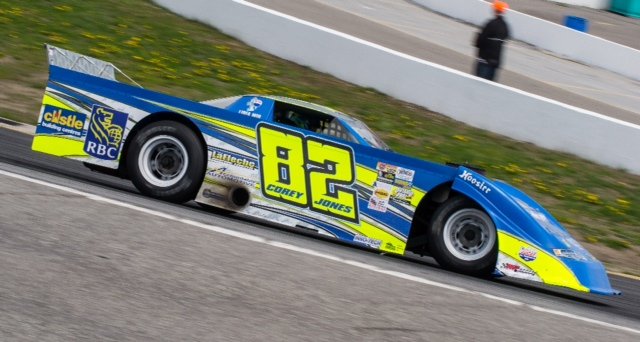 After blowing a motor in the OSCAAR season opener at Sunset, former Canadian Vintage Modified standout Corey Jones (above, by Thompson Photography) is prepared to make his equal parts triumphant and unlikely return to competition this Sunday. Here’s our post-race interview with Corey after his mechanical letdown at Sunset. Click here for the interview and follow Corey on Twitter @CoreyJones82.