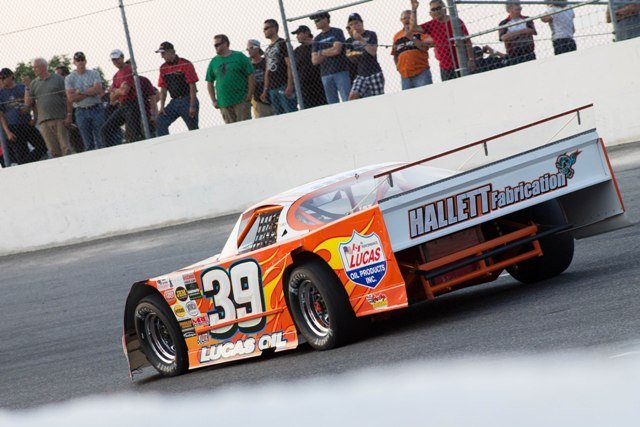 Despite suffering terminal rear-end damage at last weekend’s Don Biederman Memorial, OSCAAR Super Late Model tour veteran Shane Gowan (above, by Thompson Photography) has confirmed his team will be in action when the tour rolls into Sauble Speedway on July 13th. The Waterford, ON driver debuted a recently acquired Port City Racing chassis on June 29th at Sunset, and has since rectified the rear-end troubles and sent the car to legendary set-up wizard Jr Hanley in preparation for the tour’s Sauble event. The Gowan Racing Enterprises ride will enjoy sponsorship through the remaining 2013 races courtesy of Lucas Oil, Reclaim Enterprises, Grisdale Racing Products, Hallett Fabrication and Street Soldier MMA.

2012 Kawartha Speedway Thunder Car champion Matt Spence has announced the formation of his new Sellmunity/Spence Racing team. The Bailieboro, ON driver had driven for car owner Dave Landles for several seasons, but has confirmed the two have parted ways, with Spence purchasing the chassis, engine and equipment from Landles to continue chasing the 2013 Peterborough Speedway championship. In addition to Spence’s fulltime Peterborough commitments, the veteran has also announced a touring schedule that will allow him to tackle new venues across Ontario, with Sunset Speedway’s August 4th Super Stock Invitational tabbed as his first appearance outside of Peterborough this season. Sellmunity.ca will remain as primary sponsor of ‘The Bearcat’, with Durham Furnace Heating & Cooling, NAPA Pineridge Auto Supply and Graphic Letting offering additional support.

2011 Sunset Speedway Super Stock champion Lane Zardo made his first Ltd. Late Model start of the 2013 season on Saturday (July 6th), driving an entry for car owner/fabricator John Mombourquette. The Brampton, ON teenager will work with Mombourquette and his John Mombourquette Racecars operation several times this season, as ‘The Thrillbilly’ continues to work towards his first career LLM victory. Zardo confirmed with Inside Track that the tentative plan is for him to return to the JMR entry this weekend at Sunset, in Round 2 of the Sauble vs Sunset ‘Home and Home Series’. To keep up with Lane on raceday, be sure to follow him on Twitter @Zardo_46. Open Wheel Modified rookie Chad Strawn (above, by Thompson Photography) returned to action at Canadian Tire Motorsports Park this weekend. The Newcastle, ON driver suffered a multitude of damage in a last lap incident in the 4th round of the OSCAAR Modified Tour at Sunset Speedway on June 30th. Strawn and car owner/father Brian Strawn replaced the car’s radiator, spindles and sway bar mounts through the week, with additional repairs to the steering rack and transmission, in order to be ready for July 6th’s show. The Abateman Technologies, Drytech, Caliber Enviromental, Terrco, Winmar of Hamilton, Wickens Dry Ice, I & I Construction, Biggs & Narcisco and Safetech Environmental sponsored driver will continue his quest for the 2013 TECHTONIX Modified Series championship, before returning to OSCAAR Modified Tour competition later this season. For additional updates, be sure to follow Strawn on Twitter @ChadStrawn. 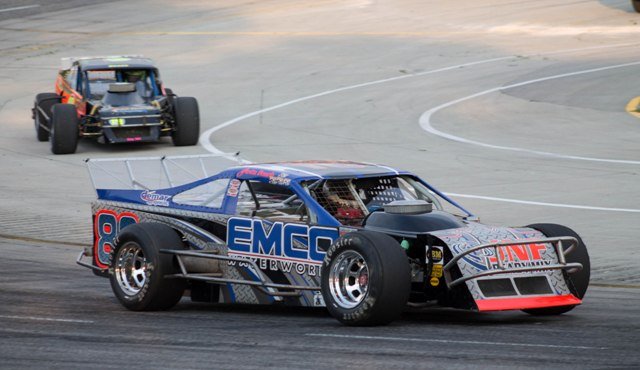 Inside Track TV caught up with Justin Demelo (above, by Thompson Photography) at Sunset Speedway recently, and asked all about his 2013 campaign. The London, ON driver talks about his 2013 Delaware Late Model Rookie of the Year bid, as well as his Open Wheel Modified commitments and the storied history of his successful OWM chassis. The insightful 1 on 1 can be found here and be sure to follow Demelo on Twitter @82OSCAARMod.

Stompin’ Tom Walters has sent along footage of his runner-up finish at Sauble Speedway on June 29th, in the first event of the Sauble vs. Sunset ‘Home and Home Series’. Walters put on a show, enjoying a race-long battle with defending Sauble champion – and eventual race winner – Scott McTeer. The video, courtesy of Stompin Tom Motorsports and crew chief Jeff Thomas, can be found here.

OSCAAR Modified Tour regular Davey Terry has confirmed via his @DaveyTerry Twitter account that he will return to action with the tour this Saturday (July 13th) at Sauble Speedway. The Erin, ON driver made hard contact with the inside retaining wall in lap-1 of June 30th’s race at Sunset, heavily damaging the front end of his Wasteco-supported ride. Terry will enter the 6th round of the tour 3rd in the point standings, 49 markers back of Gary McLean in second.