Sauble Speedway has reported that former Delaware Speedway Late Model champion Jesse Kennedy has committed to run the 2013 edition of the APC ‘Beat the Heat 150’ on August 4th. The Southwold, ON driver won the event in 2011 and returned last season with a 3rd place effort. ‘The Big Game Hunter’ is no stranger to winning marquee races, including 2 ‘Great Canadian Race’ wins and a Sifton 100 triumph at his home track of Delaware. Kennedy will return to Sauble with marketing support from Cameron Crane & Riggers of London, Bev’s Auto & Smoke Shop of Oneida, The Dreamcatcher Charitable Foundation, Tubby’s Truck & Trailer of Dorchester, Edwards & Sons Complete Property Maintenance of London, Quality Auto Body & Collision of London, Ardal Transmission of Appin and Go With The Flow Water Filtration Systems of London. 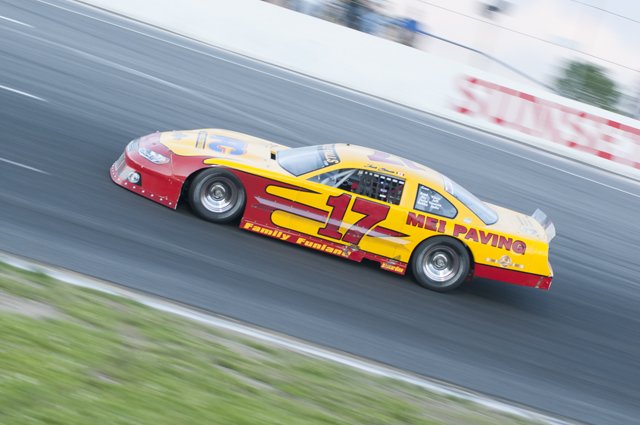 Following a 6th place finish in Round 2 of the Sauble vs Sunset ‘Home and Home Series’, Josh Stade (above, by Pamela Guppy) has confirmed he will return to Sunset on August 4th, to compete in the speedway’s 75-lap invitational event. The Chesley, ON teenager has won in weekly competition at Sauble before, but will enter August 4th with hopes of acquiring his first career victory away from his home track, as well as his first career 75-lap triumph. Stade will carry marketing support from MEI Paving, APC, Bruce Service Sales & Rentals, Kunkel Bus Lines, Ken’s Truck Painting and Family Fun Land. 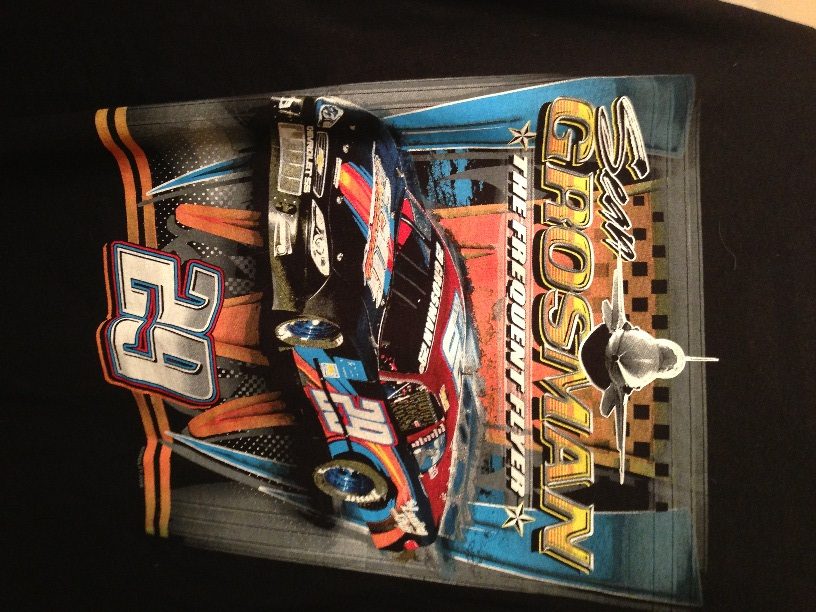 Sunset Speedway Ltd. Late Model regular Sean Grosman has announced that the 2013 edition of his popular souvenir t-shirts (above) have entered another print run, allowing fans an extended chance at showing their support for ‘The Frequent Flyer’. Those interested can contact Grosman via his www.SMGMotorsports.com website, on Twitter @SMGMotorsports or stop by his hauler in the pit area at Sunset Speedway.

Former Lucas Oil TQ-Can Am Midget champion Daniel Bois will return to action this Saturday (July 20th) for the first time in almost 2 months, when the series invades Barrie Speedway. Bois will pilot the Cliff Walsh-owned #49 that he drove to a championship in 2008. The Muskoka, ON-based driver will join 3-time feature winner Mack Deman, 2-time winner Corey Moesker, point leader Rob Neely and the rest of the Can-Am Midget roster. Event details, including gate times and ticket prices, can be found at www.BarrieSpeedway.com 1 week after an 8th place finish in Round 2 of the Sauble vs Sunset ‘Home and Home Series’, Sauble regular ‘Livewire’ Nick Goetz (above, by Pamela Guppy) will return to Sunset Speedway for weekly competition. The Saugeen Shores, ON driver, who has confirmed he will race for a championship at Sunset in 2014, will enter the event in search of his first career Ltd. Late Model feature win. The sophomore will have NASCAR Canadian Tire Series standout Jason Hathaway – fresh off of a pair of top-3 finishes during the NCATS’ trip through Western Canada – playing the role of crew chief. Goetz efforts will carry sponsorship from Great Lakes Concrete, Fast Eddie Racewear, Choko Motorsports, Shoreline Beacon, Kincardine News and Adam Weir Contracting. For updates on Goetz’ season, be sure to follow him on Twitter @NGMotorsports24. 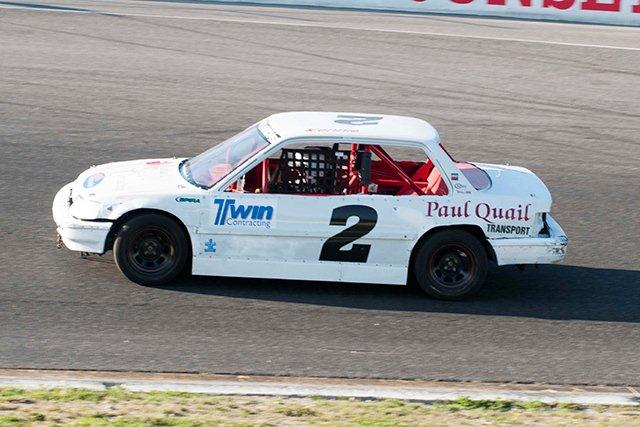 Former Sunset Speedway Ltd. Late Model regular Brendan Adams will return to competition this Saturday (July 20th) for the first time in almost a decade, when he straps into his daughter Kendra’s Mini Stock (above, by Pamela Guppy). Kendra, a 13-year old Rookie of the Year contender, will be out of action for 2 weeks after suffering a mild concussion during a heat race accident on July 13th. For Brendan, it will mark a first career start in a Mini Stock, as the veteran prepares for a fulltime return in 2014. As anticipation continues to build for the ACT International 500 on July 21st at Airborne Speedway, the entry list continues to take shape for Ontario-based drivers. We’ve already noted that multi-time Delaware feature winner Jonathan Urlin and former Oxford 250 winner Derek Lynch have confirmed they will look to qualify for the $25,000 to win event. In addition to Urlin and Lynch, 8-time Kawartha Speedway champion ‘Old School’ Dan McHattie (above) and 2011 Summer Sizzler titlist ‘The Silverback’ Bryan Mercer will make the haul to Plattsburgh, NY. For both drivers, it will mark their debut in a ‘Milk Bowl’-style, 300-lap event. For details on ACT’s newest crown jewel, visit their website at www.ACTTour.com. 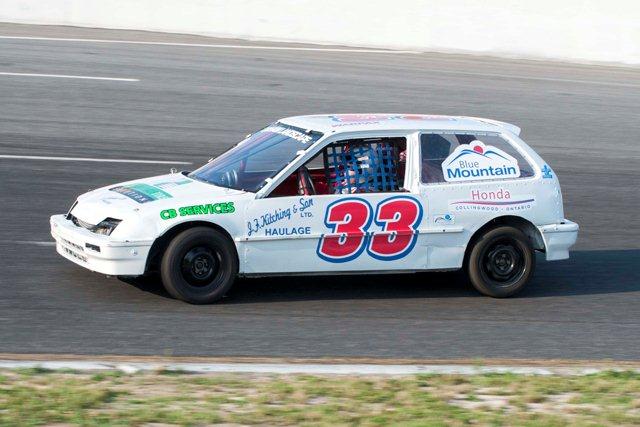 Here’s our 1 on 1 interview with Sunset Speedway Mini Stock point leader Warren Paxton (above, by Pamela Guppy). The Holland Landing, ON driver talks about Sunset’s talent-laden roster, his hopes for a 2013 championship and his soon-to-be-debuted new generation chassis. You can find the interview here, and be sure to follow ‘WarPax’ on Twitter at @Warren_Paxton. Canadian Tire Motorsport Park veteran Brad Stevenson will have a new ride underneath him when he backs out of his hauler on July 20th. The second-generation hot-shoe will sub for Chad Strawn (above, by Thompson Photography) in the speedway’s Techtonix Modified division, while the latter attends a family event. Stevenson will join Dwight Brown and Darren Kearnan as a heavy favourite to head to victory lane. Details, including gate times and ticket prices, can be found at www.CanadianTireMotorsportPark.com 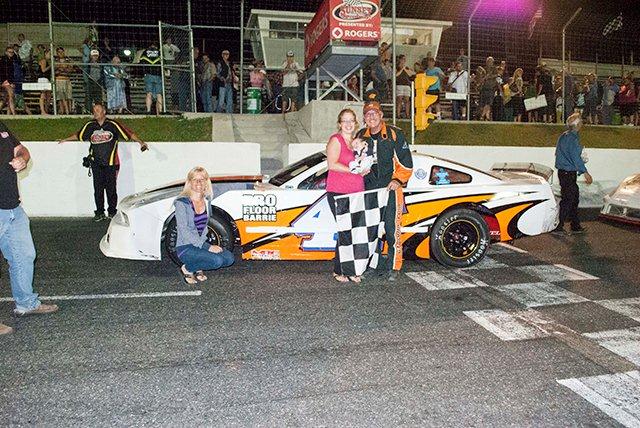 Stompin’ Tom Motorsports has sent along more fantastic on-board footage of Tom Walters’ (above, by Pamela Guppy) and the #47 Ltd. Late Model. The latest video takes you along for the ride as the 30-time champion earns his 2nd feature win of the 2013 season, in Round 2 of the Sauble vs. Sunset ‘Home and Home Series’ event on July 13th at Sunset Speedway. The footage can be found here, and don’t forget to check out Walters’ website at www.StompinTomMotorsports.com.

NASCAR Whelen Modified Tour regular Cole Powell has announced via his team’s Facebook page that he will compete at Delaware Speedway tonight, in the speedway’s Late Model division. The Mt. Brydges, ON youngster will race alongside point leader Jamie Cox, standout Matt Pritiko, fan favourite Jay Doerr among others in the track’s headline division. For show details, visit www.DelawareSpeedway.com