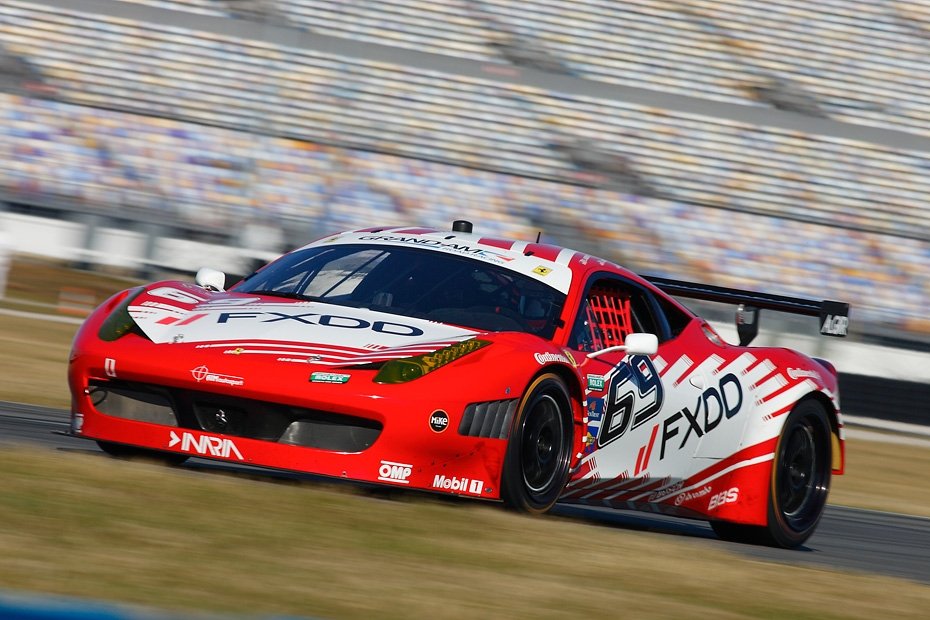 Montréal, Québec (January 19 2012) – Ferrari Québec is proud to sponsor the all-new AIM Autosport Team FXDD Ferrari 458 Italia GT Grand-Am car at the 50th Anniversary of the Rolex 24 at Daytona, January 26–29. This event marks the official return of Ferrari to its endurance racing roots after years of absence at the famed Daytona International Speedway and the GRAND-AM Rolex Sports Car Series.

Ferrari Québec opened its doors in June of 2000 and is the only factory-authorized Ferrari and Maserati facility in Montréal, Québec. Since its inception, the newly constructed 44,000 square foot facility has been dedicated to serving the Québec and Maritimes markets for the last 12 years. Their personalized service includes sales, maintenance, collision repair and the Ferrari Classiche restoration service for classic Ferraris.

While the focus of services provided is centred on serving the needs of customers’ road-going Ferraris, Ferrari Québec is not new to the racing circuit. Ferrari Québec has provided race preparation and support to many drivers participating in events ranging from the Ferrari Challenge Series, Ferrari Historic Challenge, numerous vintage-racing series, and even previously in the GRAND-AM Rolex Sports Car Series. Its most recent team effort as a supporting dealership was customer Emmanuel Anassis’ first place finishes at the final two Ferrari 458 Challenge Series races of 2011 held at Lime Rock Park and Homestead-Miami Speedway. Anassis will pursue his racing activities in the 2012 North American Ferrari Challenge Series for a full season and Ferrari Québec will support him in his quest to secure the 2012 North American Ferrari Challenge Drivers’ and Dealers’ Championships.

Before the 2012 Ferrari Challenge season gets underway, Ferrari Québec will focus its racing efforts on the 50th running of the famed Rolex 24 at Daytona. Ferrari last went to victory lane at the gruelling once-around-the-clock Daytona event with an overall win in 1998 using its 333SP prototype, and returns in 2012 to fight for the GT class honours with its new 458 Italia GT Grand-Am racer. Based on the acclaimed 458 Italia road car and 458 Challenge race car with which Ferrari Québec has had such recent racing success, the Grand-Am GT variant features several changes aimed to bring it in line with GRAND-AM Rolex Series GT specifications, most notably by restricting the 570hp road-going motor down to just under 500hp in order to find parity with cars of other competing manufacturers such as Porsche, BMW, GM, Mazda, and Ford.

Sharing driving duties of the Ferrari Québec supported AIM Autosport Team FXDD Ferrari 458 will be 2010 GRAND-AM Rolex Series GT Champions Jeff Segal and Emil Assentato, who add experienced Ferrari racers Nick Longhi and Anthony Lazzaro to round out the team for the 24-hour event. This will mark the third consecutive year that this driving team has shared a car in the Rolex 24 at Daytona, and all four drivers are poised to make use of their collective Ferrari racing experience.

Umberto Bonfa, President of the prestigious bi-branded dealership states, “I’m thrilled about this affiliation and want to thank the AIM Autosport Team FXDD for giving us the tremendous opportunity to be a part of history at the 50th Anniversary of the Rolex 24 with Ferrari.” He continues, “Sports car racing is at the core of every Ferrari’s DNA, so it seems natural for a passionate and committed dealership like Ferrari Québec to support what promises to be an exhilarating chapter in Ferrari racing history.”

Following the Rolex 24 at Daytona, Ferrari Québec will continue their support of Canadian-based AIM Autosport Team FXDD  when the team visits downtown Montréal on August 17–19, as part of the GRAND-AM Rolex Sports Car Series race at Circuit Gilles-Villeneuve.  This partnership will allow Ferrari Québec clients and guests an up-close look at the 458 Italia GT Grand-Am race car as the team battles for the 2012 Rolex GT Championship.

JMW Motorsport and WeatherTech together for Le Mans 24

Carl Edwards is coming to the CME!