Carl Edwards is coming to the CME! 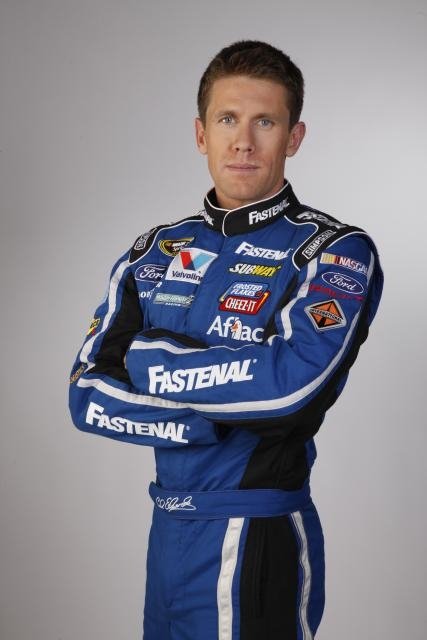 NASCAR star Carl Edwards is coming to the Canadian Motorsports Expo on Saturday, February 11. Edwards, driver of the No. 99 Fastenal Ford Fusion NASCAR Sprint Cup car, will be signing autographs and meeting with Canadian racing fans just one week prior to taking to the track at Daytona International Speedway to qualify for the season-opening Daytona 500.

Last November, Edwards finished NASCAR’s Sprint Cup ‘Chase’ playoff season tied with Tony Stewart atop the point standings, but Stewart was crowned champion due to winning more races than Edwards in 2011. However, it was the closest championship battle in NASCAR’s history and Edwards won universal praise for his performances, both on and off the racetrack.

“I’m looking forward to coming to Toronto on Saturday, February 11 to meet Canadian racing fans at the Canadian Motorsports Expo,” said Edwards, who won the 2009 NASCAR Nationwide Series race at Montreal’s Circuit Gilles Villeneuve. “I was in kind of a rush the last time I was in Canada, last August. We were doing double-duty that weekend, shuttling back and forth between the Michigan Cup race and the Nationwide race in Montreal. This time, it’ll be nice to chat with the fans in a more relaxed setting.”

Edwards, who has 19 career Sprint Cup wins to his credit, recently announced he plans to concentrate on NASCAR’s top tour in 2012, after seven seasons of also taking part in the full Nationwide Series. The Columbia, Missouri resident was the Nationwide Series champion in 2007.

“We’re very pleased to announce that Carl Edwards will be our headline celebrity at this year’s Canadian Motorsports Expo,” said the CME’s David Weber. “Heading into this year’s show, virtually all of our exhibitor space has been sold and we’ve gotten a lot of great support from some of the country’s top companies, racing series, tracks, manufacturers and retailers. This year’s CME is going to be the best ever, and we’re extremely excited that Carl Edwards is going to be part of it.”

Carl Edwards is scheduled to appear at the CME from noon until 2 p.m. on Saturday, February 11. During his visit, he will appear on-stage for a moderated Q&A with the audience before taking part in a one-hour autograph session. Watch the CME’s website (www.CanadianMotorsportsExpo.com) for details on Carl Edwards’ appearance, including confirmed times and the autograph session.

ABOUT THE CME: The Canadian Motorsports Expo Powered by Inside Track Motorsport News is a three-day celebration of Canadian racing that runs February 10, 11 & 12, 2012 at the International Centre (6900 Airport Road in Mississauga, Ontario (Canada)). In addition to booths and racing vehicles representing the entire spectrum of Canadian motorsports, the show is loaded with seminars and forums to entertain and inform racers and fans alike. Celebrity drivers will be at the CME to sign autographs and meet the fans. One of the special themes of this year’s CME is the CASCAR Reunion. Please check the show’s website (www.CanadianMotorsportsExpo.com) for news, updates, schedule information and more.