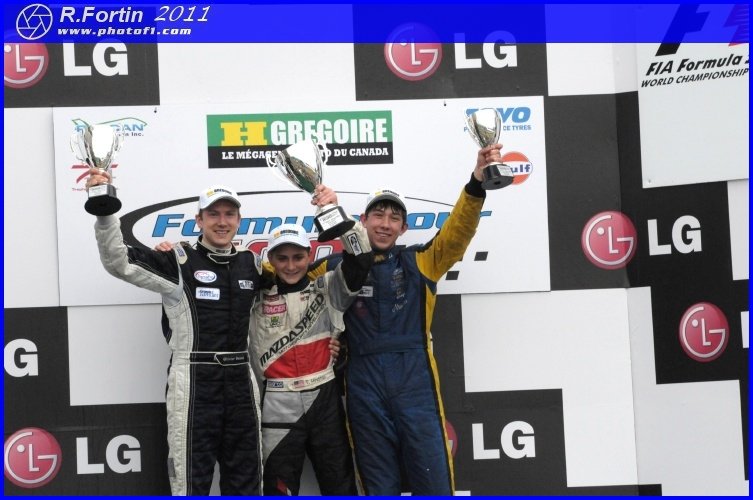 BGR Team Grote enjoyed the ultimate success this past weekend with a well deserved victory in the Formula Tour 1600 F1 GP support event. The team returned to the GP with the last visit being in 2007 with Kyle Marcelli and Conor Daly.  With 41 cars to contend with and 3 of the 5 team drivers having never seen the track before it was a steep learning curve. Both Kieran Murphy and JC Cote had been there last season so they had some but limited knowledge of the Circuit Gilles Villenueve.  A very short qualifying session did not help much as a total of 6 laps to learn the track and get a handle on set up put the team under pressure to figure things out in a hurry.  The approach to Saturday’s race was to keep learning and use it to get ourselves further up the grid for the Sunday feature.

Qualifying 8th was Trent Hindman making his debut in FF, Chris Vlok lined up 15th, JC Cote in 21, Ayrton Triolo 25th and Kieran Murphy suffering through a misfire the whole session was 36th. The race went green the whole distance and the group enjoyed a 16 lap event with all of the drivers getting more acclimated to the track.

Each driver improved and learned what they set out to do and other than a spin with JC who had light contact and was forced to retire, they moved up with Trent coming home in 6th, Chris improving 6 spots to 9th, Ayrton jumping up to 19th despite a spin to avoid another competitor and Kieran improving to 28th with the misfire still not completely cured.

The Sunday race was what we had been working towards and when the team  arrived to a rain soaked track  it was obvious it would be a wild affair with very tricky conditions for everyone. From the start it was Trent making his way methodically through the fast group of leading drivers, one by one he moved forward and he was up to second by the 5th lap, then it was a duel between the reigning Quebec FF Champion Olivier Bonnet and Trent. After several attempts he made the pass on the long straight run down to the final corner and took the lead, he then was able to stretch his lead and secure the win for the BGR Team Grote group. Chris Vlok had another solid run with a 9th place finish despite being pushed off the road for the second straight weekend and losing a couple of spots on the final lap.  Ayrton had made his way forward from his grid spot but a late spin dropped him back to 18th at the flag. He had climbed to 14th at one point but none the less enjoyed his first trip to the GP. JC had moved up but the tricky conditions caught him out as he had a spin and made contact with the wall in his first ever FF rain race.  Kieran with the misfire now cured finished 28th after a spin took back the 6 spots he made up during the first 7 laps.

“It was a great weekend for  BGR Team Grote despite the troubles we had with Kieran’s elusive misfire and the bad luck that JC encountered. Trent did an outstanding job and we are very excited about the rest of the season as he will contend for wins from here on out.  Chris did a great job as well, he has the speed and as he becomes more familiar with the circuits and the competition he will definitely be on the podium soon. Ayrton did a good job and would have had better results if not for a some evasive moves he had to make to miss cars and spin himself in doing so. It was our first weekend with JC and he is a pleasure to work with. He was thrown into the deep end with the weather as he had never driven a FF in the rain. Some more seat time would pay dividends and we hope to see him again soon. I have to thank all our crew for their hard work, Mark, Gibby, David, Christine, Kyle, and our engineer Eric Langbein provided great cars. The Formula Tour 1600 officials did a great job and worked through some difficult situations with the courtesy we have now become accustomed to with them. We were also very grateful for attendance of our guests from Grote who were treated to a win by their own car! ” commented team principal Brian Graham.

BGR Team Grote is now busy preparing for the 2011 edition of the Can Am Cup to be held at Mosport International Raceway June 24-26. Trent, Ayrton, and Kieran will be joined by team alumni driver Mikhail Goikberg as they try to bring home the Cup! To learn more about the team visit www.briangrahamracing.com.