by Tim Miller
in Press Releases
0

MT. HOPE, ON – After a year’s hiatus Dragstrip Memories will be returning to the Canadian Warplane Heritage Museum, presenting the largest collection of historic drag racing cars and memorabilia in Canada.
The vintage Warbirds of the museum will be relocated in the large hangar to present some of the most outstanding cars in this country. Along with the Paton Top Fuel Dragster and the Northern Warrior Jet Dragster, the show will feature other jet-powered vehicles, front-engined dragsters, Pro Modifieds, several period Gassers, and a gaggle of Stockers and Super Stockers.

There will also be club displays at the show from the Hamilton-based Road Runners and Rod Masters plus the East London Timing Association. There will be well in access of 50 performance race cars for viewing.

There will be several car club displays with a nostalgic theme, a popular scale model display featuring all kinds of classes of drag cars in a miniature setting of the former Dragway Park, and a host of vendors. There will also be movies and videos of drag racing, photos, magazines, and automotive art.

This year’s show will be held Sunday, April 15, 2018, with doors to open at 9:00 a.m. until 4:00 p.m. The Canadian Warplane Heritage Museum is located on Airport Road in Mount Hope, just south of Hamilton, and provides ample parking.

The entrance fee will allow visitors to take in all the ambiance and history of the war planes as well as partake in this special collection of drag racing history.

For more information, contact Rob Potter at rpotter396@gmail.com or Tony Hayes at tjhayes57@gmail.com 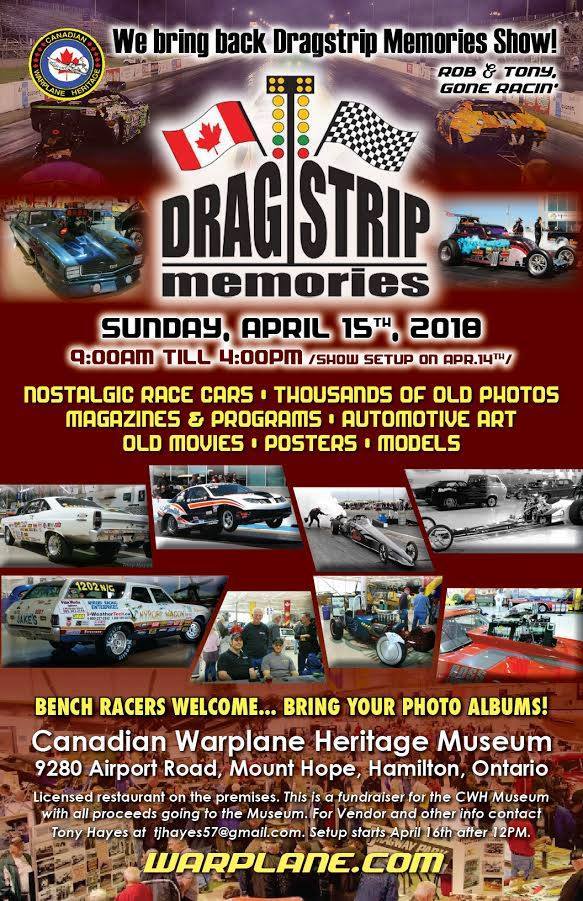