GRAND BEND, ON  – In March of this year the IHRA family was devastated by the passing of Jim Weinert. A master of track preparation, Weinert was known for his record-setting tracks, his statuesque figure and to many more, a great friend. That rang especially true for Top Fuel competitor Bobby Lagana Jr.

Weinert was like a father to the Lagana brothers and his passing was especially tough on longtime IHRA competitor Bobby. There to greet him at the head of staging before every pass over the past decade, the absence of “Big Jim” was a big void that Lagana hoped to somehow fill with a special tribute car for the Canadian portion of the 2012 Nitro Jam tour.

On Sunday Lagana ended that tour with one of the biggest wins of his Top Fuel career as he edged another longtime IHRA racer Bruce Litton for an emotional victory at the MOPAR Nitro Jam Nationals at the Grand Bend Motorplex in what he calls one of the biggest healing days of his life. 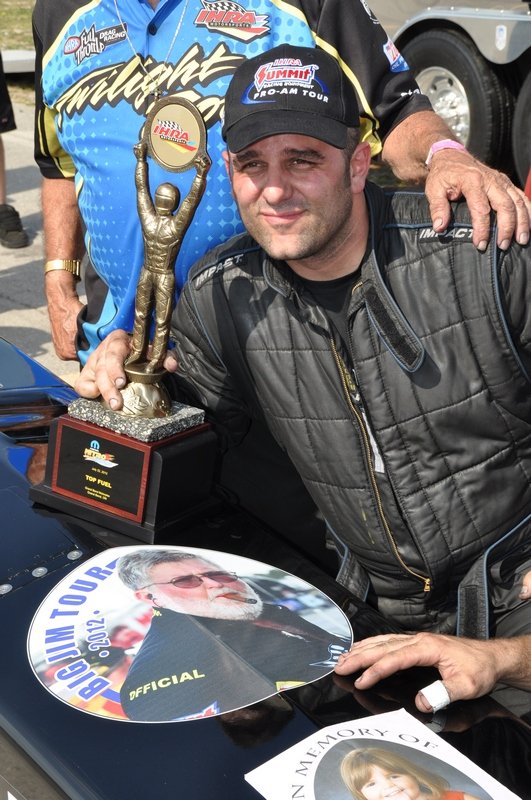 “When you lose someone you are going to have hard days and you are going to have healing days. You never know when those days will come, but you know they are awaiting you. Nights like last night and today were healing days,” Lagana said. “We will never be able to replace that man, but this weekend was a healing one for everyone. The IHRA, Carrie and the boys, ourselves and even the fans that spent their hard earned money to watch us race – this was for Jim.” 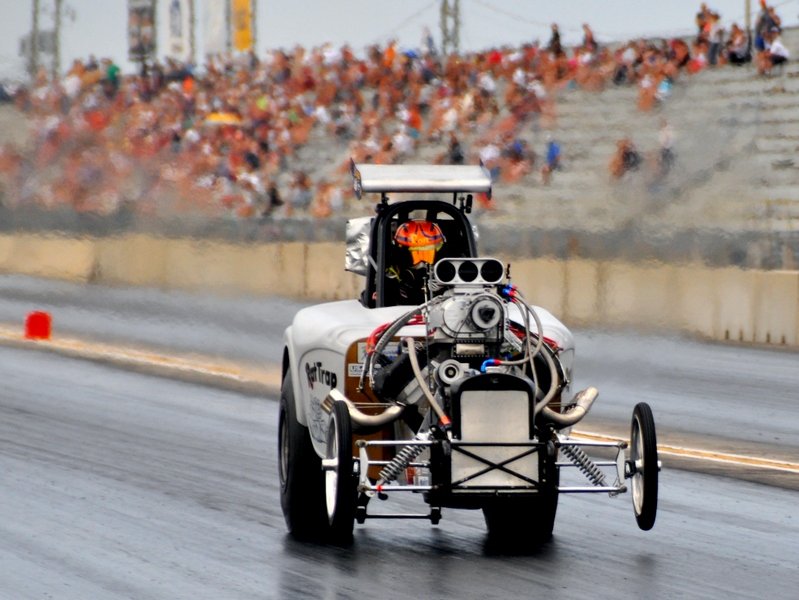 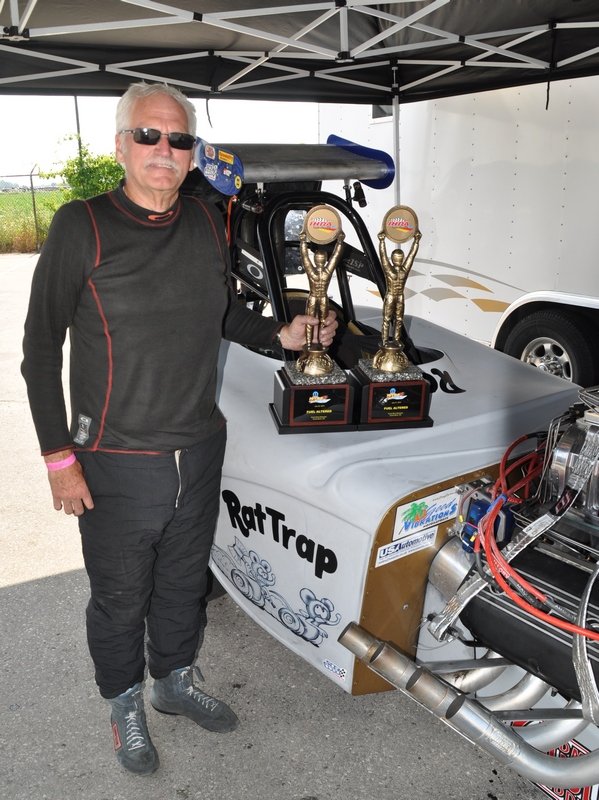 Joining Lagana in victory lane Sunday in Grand Bend was Ron Hope in Fuel Altered, Peter Gallen in AMSOIL Prostalgia Nitro Funny Car, Steve Dorn in Nitro Harley, Eric Latino in Pro Mod and Jacob Elrod who set an IHRA record by winning in three different classes in one weekend for the first time ever. 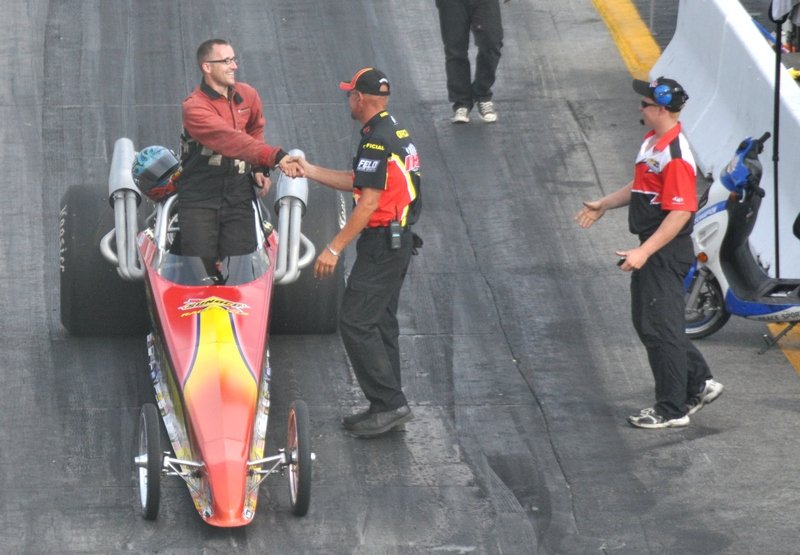 Other sportsman winners on Sunday were Steve Doornsbosch in Mod ET, Taitlyn Summerfield in Junior 8-12, Gillain Bishop in Junior 13-17 and Raymond Philp in Harley Destroyers.

“Bruce and I have run each other three weekends in a row. That team is like family to us, but we proved a few weeks ago that even though we love each other, when that light turns green the other guy is going to go for it all,” Lagana said. “We both have a long history with the IHRA and this was a fitting way to end the weekend. Last night and today Jim was with us for sure.”

Lagana had low ET of round one in a win over Smax Smith, giving him three straight round wins to take his first Ironman since 2011 and the track record at one of the longest running IHRA Nitro Jam races.

“Last night’s pass was a little faster than we anticipated, but it was enough to break the track record which was just awesome,” Lagana said. “There have been some unbelievable names to run here and for us to get that record and now a win meant a lot to this team.”

In the Top Fuel consolation round Saturday night winner Kyle Wurtzel continued his winning ways with a victory over Smax Smith.

Another driver with a Grand Bend weekend they will never forget is Ron Hope behind the wheel of the famous “Rat Trap” Nostalgia Fuel Altered. Hope won his first career Ironman on Saturday and backed that up with another monumental victory on Sunday over the most dominant man in the class Ron Maroney.

“This weekend was more than exciting. It is hard to find the words to describe what this means to us,” Hope said. “Last night I thought it couldn’t get any better, but today it did. It was like David versus Goliath both runs. Some could say that sometimes you just get lucky and that is probably true, but the Ironman doesn’t say a word about that. It just says we got there first.”

Hope, from Franklin, Tenn., was bumped into the final after round one winner Tom Padilla failed to make the call as Hope went up against the fastest man from round one by a considerable margin. Maroney drove the “Blind Faith” entry to a 6.161/218.02 in round one and looked poised to back that up in the final, but he ran into issues in the final and Hope was able to drive around him for the win with a winning 7.024/193.90.

Hope actually had low ET of the weekend in his win on Saturday. In the consolation run Mike Hilsabeck picked up a win on a single.

Peter Gallen returned to victory lane in AMSOIL Prostalgia Nitro Funny Car with an exciting final against Mike Minick. Gallen, from Broomall, Pa., had low ET in round one and blasted down the track in the final with a 5.827/247.57 as the “Poverty Stricken” Chevy Monza got off the line first and never trailed. Minick in the “Chi-Town Hustler” Charger had an equally impressive 5.985/226.51 in taking runner-up efforts. 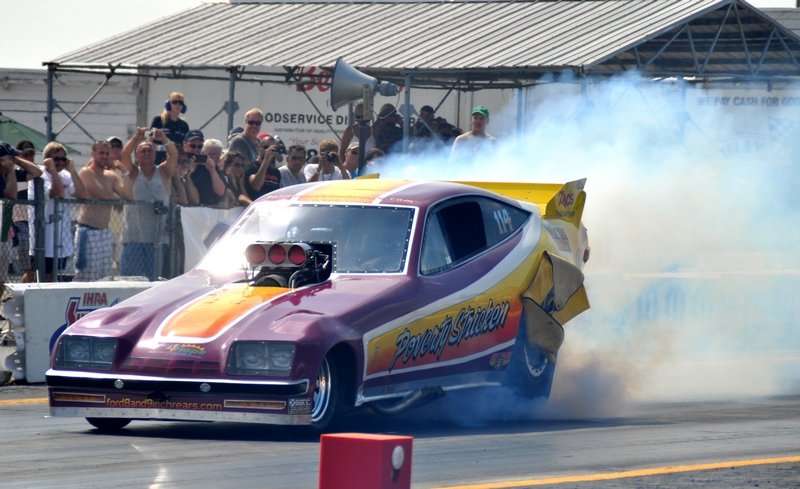 “Last night the car ran good, but in the final it just made a bad move,” Gallen said. “Today it was a completely different track with the conditions, but it ran extremely well. I have to give a lot of credit to Aaron Smith from Mickey Thompson tires. I have been using his shoulder to cry on and he has hooked me up with some changes that got us to the winners circle tonight.”

In Nitro Harley Steve Dorn, from Milwaukie, Ore., made it four-for-four for Americans at the Ontario track with a win over Jay Turner. Dorn struggled in round one, but managed to squeak by a struggling Randal Andras. In the final Dorn finally found his groove and blasted down the quarter-mile with a 6.519/211.79 to Turner’s 7.544/121.14. 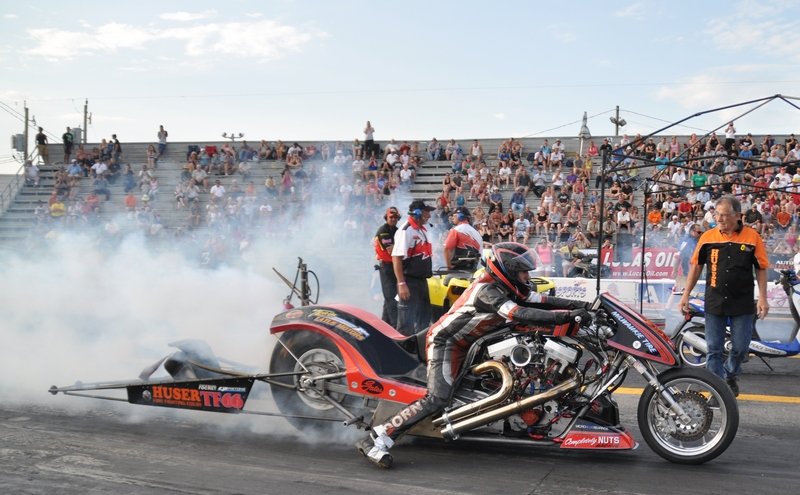 Wrapping up the professional categories was Eric Latino from Whitby, Ont., who claimed the PMRA Pro Mod title over Rocky Dileece. Latino qualified fourth and defeated Jacinto Santos and Bruce Boland on his way to the Pro Mod final.

Unfortunately the final wasn’t much to talk about as Dileece went .056 red, giving Latino the win and an Ironman to take home with him.

Perhaps bigger than all of that, however, was the feat by Jacob Elrod. The Ohio native won three different classes at one event for the first time in IHRA history, claiming Rick Stroud (QR), Kevin Orr (HR) and Dan Morgan (TOP ET) as his victims. The win also earns Elrod two tickets to the Tournament of Champions at Memphis International Raceway in October.

Next up for the Nitro Jam tour is a stop at U.S. 131 Motorsports for the CarSafe Northern Nitro Jam August 10-11 at the fastest track in all of Michigan.