DOVER, DELAWARE - MAY 02: Kyle Larson, driver of the #5 HendrickCars.com Chevrolet, and Chase Elliott, driver of the #9 NAPA Auto Parts Chevrolet, leads the field to the green flag to start the NASCAR Cup Series DuraMAX Drydene 400 presented by RelaDyne at Dover Motor Speedway on May 02, 2022 in Dover, Delaware. (Photo by Tim Nwachukwu/Getty Images)

In this week’s edition of Dave Mathers’ Motion Motorsport Report, Dave takes us through the extended NASCAR race weekend at Dover Motor Speedway, IndyCar’s weekend at Barber (in Alabama), NHRA’s appearance in Charlotte and more.

NASCAR CUP SERIES: Speedway Motorsports has purchased Dover Motor Speedway and several updates have been done to the great facility. Chris Buescher (Ford) grabbed the pole over Denny Hamlin (Toyota) and Kyle Larson (Chev). On the start Hamlin spun his tires and Buescher took off.

Hamlin recovered and took over the lead less than thirty laps later. For the most part the drivers seem to like the ‘bad fast’ concrete racing surface. Several drivers had experienced problems during practice and qualifying but up to the competition caution on lap 40 everything was fine with no incidents.

Mother Nature brought out the laundry on lap 68 and then the yellow changed to red and the cars covered up on pit road. They went back out but only made it another ten laps before the red came out again. Racing was called for the day and resumed Monday at noon.

Austin Cindric spun and Ryan Blaney tagged Todd Gilliland from behind. Both cars were able to continue. On the restart Chase Elliott jumped into the lead ahead of Larson and Hamlin. Cindric, after the repairs, could not get up to speed so he was ordered to the garage for the day.

Hamlin won Stage 1 with Elliott and Christopher Bell 2nd and 3rd. After the ensuing pit action Hamlin went back out and lost the left front wheel. Penalties WILL follow!! Ross Chastain, a two-time winner already this year, restarted in the lead on the restart.

On lap 156 Kyle Larson spun on the front straight and ended up backwards against the inside wall. He flattened both outside tires doing a bit of damage to the front fender. He was able to continue after some ‘hand lapping’ of his fenders on pit road.

On lap 189 Kurt Busch spun on the back straight after a tap from A.J. Allmendinger. Then, shortly after, Joey Logano got tagged by an ‘over correcting’ Erik Jones sending him up into the wall. Tires problems started to arise as they neared the end of the second stage as the concrete surface was very abrasive on the rubber.

Just nine laps before the end of the Second Stage Denny Hamlin, running fourth, got spun by Cody Ware who was several laps down. That stage was won by Ryan Blaney ahead of Kyle Busch and Alex Bowman.

The tenth caution came out on lap 324 when Dinger lost his right front wheel and it rolled around out on the track. Denny Hamlin got caught speeding on pit road, so he was sent to the back on the restart. On lap 335 Daniel Suarez slid up into Corey LaJoie and spun bringing out another caution. Tyler Reddick spun on lap 343 bringing out yet another yellow.

It’s hard to believe but they ran caution free right to the checker with Chase Elliott winning, Ricky Stenhouse second and Ross Chastain third. On the last lap Martin Truex made an attempt to pass Chastain on the back stretch but Chastain moved up causing Truex to spin. He recovered to finish 12th. Chastain will have to give Truex a free watermelon!! LOL

Chase Elliott continues to lead the points by 50 over Blaney and by 65 over Byron.

Their next race, Darlington, is Sunday, Mother’s Day at 3 P.M.

NASCAR XFINITY SERIES: Brandon Jones (Toyota) started on the pole followed by Sam Mayer (Chev) and Noah Gragson (Chev). 27 Chevs, 6 Toyotas and 5 Fords took the green. David Starr brought out the first caution on lap 19 when he made contact with Kyle Weatherman spinning out Starr. All cars continued fortunately.

Mayer won Stage 1 followed by Justin Allgaier and Josh Berry. Before the restart Mayer lost a wheel forcing him back to the pits. There will be penalties in the offing!!

John Hunter Nemechek lost a tire while running at the front with 6 to go in the 2nd Stage. Mason Massey spun into the wall on the last lap of the same stage bringing out the yellow. Allgaier picked up the stage win with Jones second and AJ Allmendinger third.

Stefan Parsons brought out the 4th caution by spinning on lap 102 but kept going. Bayley Curry had a ‘moment’ when it appeared the rear end blew up/seized up as came out of 4 on lap 160. He was done for the day.

At the checker it was Josh Berry atop Allgaier and Ty Gibbs. Four of the top five cars are owned by JR Motorsports, Dale Earnhardt, Jr.’s company. Canadian Alex Labbe started 19th and finished 19th. Noah Gragson picked up the $100,00 Dash for Cash for the fifth time.

Dinger continues to lead the points by 43 over Gibbs and Gragson who are tied in second. Their next race, Darlington, is Saturday at 1.30 P.M.

FORMULA ONE: Their next race is the inaugural race in MIAMI, Florida, Sunday at 3.30 on ABC.

INDYCAR: Wow, IndyCar can’t seem to be able to get their drivers to complete a proper green flag start. The initial green Sunday at the gorgeous Barber Motorsports Park in Birmingham, Alabama, was waved off and they had to do it over again. Guys, it’s not that hard!!

Colton Herta, rumoured to be heading to Formula One, made an ill-advised attempt to pass teammate Romain Grosjean and almost took out both cars on lap 16. On lap 32 Callum Ilott, running in the top ten, overcooked an attempted pass and ended up in the gravel trap.

Herta looped it again later on but kept going not losing any spots. With 4 to go Grosjean twice banged into Graham Rahal but neither spun. I’m guessing that he forgot how big Rahal is!! And then, for some irony, Grosjean passed Rahal coming to the flag as Rahal, apparently, had run out of gas!!

O’Ward picked up the win ahead of Palou and Veekay. The same top three as at the start just in a different order!

Alex Palou has a 3-point lead over Scott McLaughlin and 9 points on Josef Newgarden.

Their next race is the Indy Road Course on Saturday.

IMSA: They dropped into the magical Laguna Seca Raceway on the Monterey Peninsula on the weekend. Laguna was one of only a handful of race tracks that are government owned. AND that government owner has pledged nearly ten million dollars for facility improvements before next year.

That will include repaving the entire racing surface. Linda and I talked track security into letting us take a couple of laps around the track back in 1989 and I can assure you that the famous corkscrew’s pucker factor is huge, even at low speeds.

Ricky Taylor (Acura) grabbed the pole in DPi, our very own Canadian Pfaff Motorsports Porsche 911 GTR3 in GTDPRO and Russell Ward in a Mercedes-AMG GT3 in GTD. Unfortunately Ward hit the wall hard just before the one hour mark sending him to the trailer.

Sebastian Bourdais experienced electrical problems half an hour in and slowed to a stop at the side of the track. After what appeared to be a control/alt/delete he was able to re-fire and continue in his Cadillac. However the car did retire later.

Alex Lynn spun into the gravel in his Cadillac Dpi with an hour and a quarter to go losing some valuable time.

Filipe Albuquerque (Acura) got around Tom Blomqvist (Acura) at the end of the race to take the victory in DPi with Pipo Derani (Cadillac) third.

Matt Campbell and Mathieu Jaminet dominated the Pro class in the Pfaff Motorsports Porsche finishing well ahead (over half a minute – 31.89 sec.) of Ben Barnicoat (Lexus) and Connor De Phillippi (BMW).

MEMO to IMSA. I have ranted for years about the constant changing of the names for the different classes. In the current issue of Inside Track Motorsport News, a highly respected Canadian magazine, a very well written story ‘Dream Result’ appears covering the success of the Pfaff Motorsports Porsche.

In two spots the headline writers, all very knowledgeable motorsports followers, get the class wrong and that is YOUR fault. The sub-headline reads, ‘Canadian Team Pfaff Wins GTD class at the Rolex’ and a caption under a photo reads, ‘Pfaff earned the GTD class win’!!

It used to be GTLM but now it’s GTDPRO. How do you expect newcomers, the future of your sport, to understand your classes when current fans don’t get them? ‘Physician, heal thyself’!!

Their next race is at Mid-Ohio on Sunday. It’s been 45 years since we last visited that great track, for a USAC race.

NHRA: They dropped into the great zMax Dragway, part of the amazing Charlotte Motor Speedway complex just east of Charlotte, North Carolina. They were running the Four-Wide Nationals where FOUR cars run together rather than the traditional two cars.

The track was built back in 2008 with the idea of having four wide racing. That concept took some convincing with many of the old school racers but everybody has pretty much signed on to the idea. The start of the race was moved up one hour due to the weather threat but, fortunately, the rain held off.

Legendary John, ‘don’t call me the GOAT,’ Force grabbed the top spot and marched through all three rounds to take the win, his 155th, over teammate / son-in-law / team president Robert Hight, Ron Capps and Mike McIntire.

B.C.’s Justin Bond (‘69 Camaro) took the top spot with a 5.744 but lost in the first round. Kris Thorne (‘21 Camaro) qualified second and marched through all three rounds picking up the win over Lyle Barnett (‘18 Camaro), ‘Tricky’ Rickie Smith (‘22 Mustang) and Stan Shelton (‘19 Mustang).

Brittany Force leads the T/F points by 17 over Salinas and by 46 atop Ashley.

Matt Hagan in the floppers leads Hight by 22 and Capps by 66.

Steve Johnson has a 6-point lead over Karen Stoffer and 89 over Krawiec in Pro Stock Bike.

Their next race is at Virginia Motorsports Park, this weekend.

NASCAR Pinty’s Series: Starts their season at Sunset Speedway on May 14.

THE KENTUCKY DERBY: Not car racing, but…. NBC has scheduled FIVE hours to cover the 148th running of the legendary Kentucky Derby this Saturday. Four hours and fifty-eight minutes of mindless drivel and two minutes of actual racing. And 400 red roses had to be sacrificed for the huge garland placed on the winning horse. LOL

I wonder which trainer will be caught ‘juicing’ this year? But, not to worry, if they do get caught, they can just transfer their horses to another trainer to enter them!! Just ask Bob Baffert how that works!! Hmm.

EARL ROSS MEMORIAL: Bill Daniels tells us that they are putting on an Earl Ross Memorial / Racing Legends Reunion on October 15 at the Ailsa Craig Community Center. It is a fund raiser for the Ailsa Craig Historical Society. All are welcome to attend, racers, fans and friends. More details to follow. 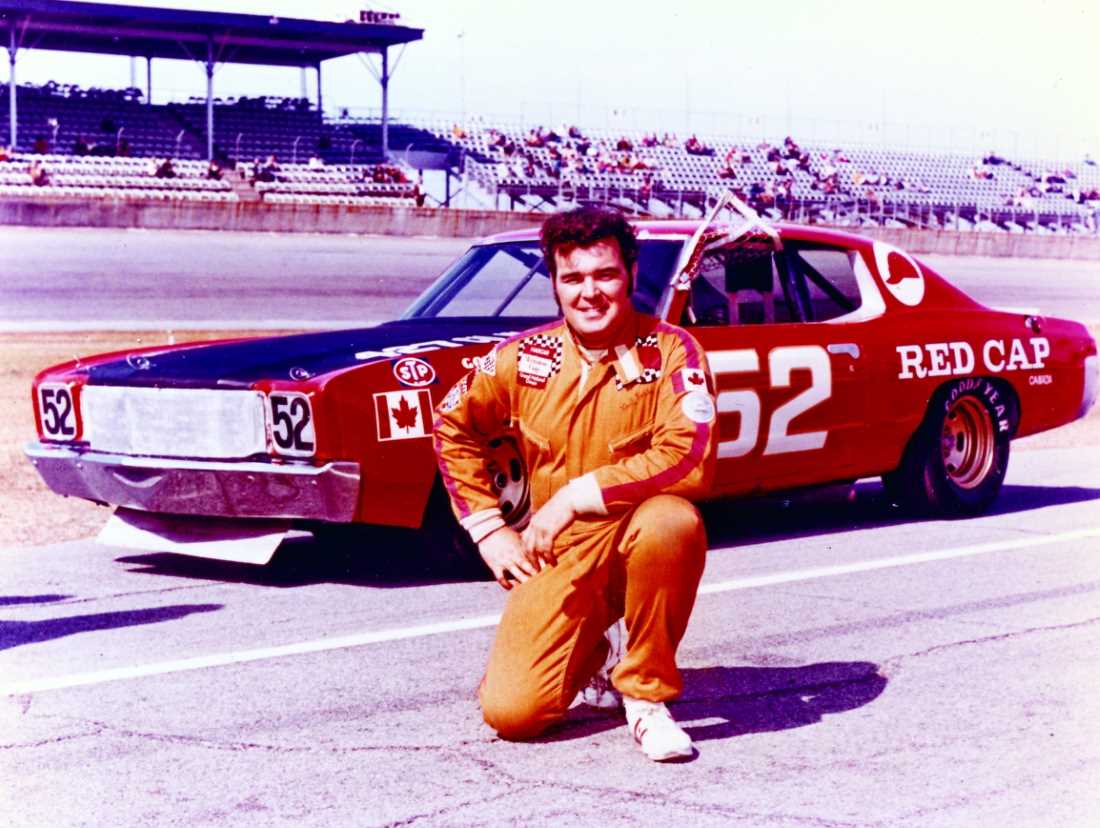