First the bad / sad news! Jukasa Motor Speedway – Canada’s most beautiful racing facility – has made the decision to cancel racing this year due to the pandemic restrictions and it will most definitely be missed.

And, on a personal note, I am rather upset that Formula One decided to run the Monaco Grand Prix a week early. I always looked forward to the Sunday of the U.S. Memorial Day weekend where I could watch Monaco in the morning, head off to church, come home for the Indianapolis 500 at noon and then tune in to NASCAR in Charlotte for the Coca-Cola 600, at six.

Speaking of Monaco, it was – as the late Dick Trickle once said about Anderson Speedway (or was it ASA inside the Pontiac Silverdome? – my head still hasn’t cleared from the fumes in there!!) – like ‘racing jet fighters in a gym!’

My wife Linda and I have walked that course three different times and let me tell you the ‘pucker factor’ is huge.

Charles LeClerc had the pole locked up but touched the wall going around the swimming pool corner and stuffed it severely, damaged his car.

He did not start Sunday. Mercedes had what can only be called a ‘weekend to forget.’ Valtteri Bottas dropped out after a wheel nut malfunctioned on a pit stop.

Hamilton had the fastest lap (lap 69) but still finished back in seventh. Even so, he is only four points behind Max Verstappen for the points lead.

And another F1 head scratcher – Canada’s Lance Stroll is ‘under investigation’ by the stewards for crossing the white line… on pit out!! Tennis star Serena Williams was a nice addition to the show, waving the checker flag and taking part in the post race interviews.

NASCAR had all three of its touring series in action at the ultra-gorgeous Circuit of the Americas (COTA) in Austin, Texas. 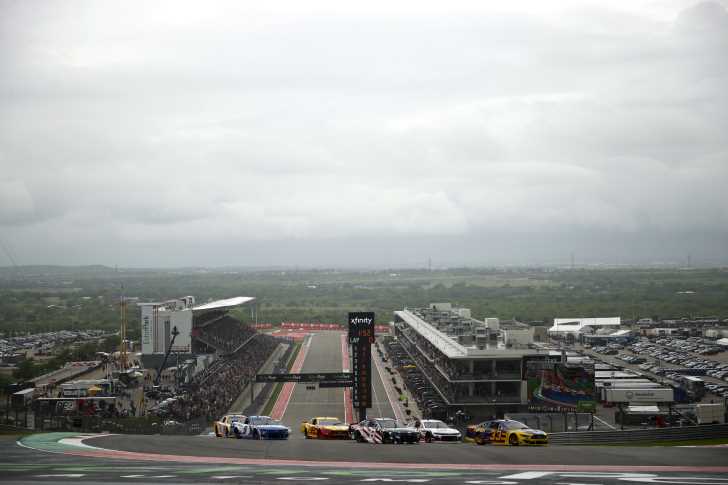 CUTLINE: Austin Cindric, driver of the #33 Pirtek Ford, and Tyler Reddick, driver of the #8 Cheddar’s Chevrolet, lead the field – up the big hill into turn 1 – to start the NASCAR Cup Series EchoPark Texas Grand Prix at Circuit of The Americas on May 23, 2021 in Austin, Texas. (Photo by Jared C. Tilton/Getty Images)

The run up the hill into Corner One is really cool. Second generation racer Todd Gilliland took the Truck race, while Kyle Busch, once again, stunk up the show in the Xfinity race. That’s like Auston Matthews coming down to play with the London Knights!!

The Cup race was more like a demolition derby. The rain caused untold chaos with many wrecks.

An interesting observation was the paint scheme on Austin Cindric’s #33 Mustang. It brought back memories of the late, great Mark Donahue who raced very successfully for Roger Penske back in the day. Chase Elliott picked up the rain-soaked checker flag in the race, which was cut short by 14 laps.

NHRA is still in a holding pattern at Houston for the same rain that hit Austin about 150 miles away. Update: Houston is rescheduled for today (Monday). 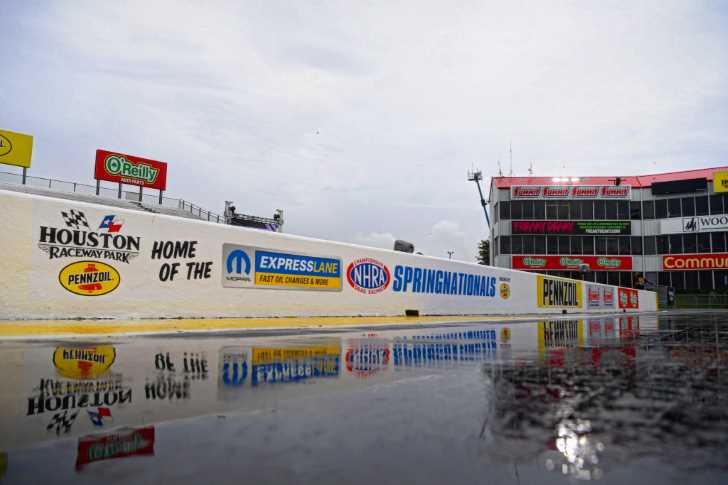 CUTLINE: NHRA was washed out on the weekend and will try again on Monday. Courtesy NHRA.

IndyCar qualifying for next week’s 500 was interesting, if not controversial. It may be time to stop using the old USAC style ‘system’ to establish the starting lineup and make things simpler.

A couple of items in the latest print edition of Inside Track Motorsport News merit comment. Greg MacPherson’s ‘The Inside Line’ made mention of Bristol Motor Speedway’s recent dirt race.

I worked the NHRA Springnationals at Thunder Valley (Bristol) in 1967. I walked over to the oval and was blown away by the high banking.

But the seating then might have held about 20,000 spectators. In 1989, Rich Grady – who was selling cars for me at the time – asked if I wanted to buy his Bristol tickets as he couldn’t go.

My wife and I went and I was impressed by the addition of back straight grandstands. However, a trip to the track in 2010 completely blew me away.

Stadium seating for about 160,000 seats… on one of the shortest tracks on the circuit. Awesome. 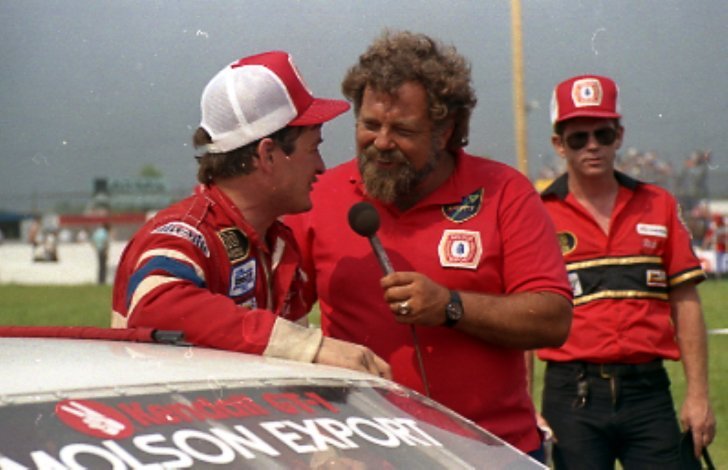 Also in the same issue of Inside Track, the Motorama show stories made reference to the late ‘Dizzy’ Dean Murray.

In the ‘60s and ‘70s, I wrote a column in his Wheelspin News titled, ‘Technically Speaking.’ In 1969, Dizzy suggested that he and I should rent the Sparta (ON) track from Bob Harvey and put on a big bracket race.

Come race day, we were greeted with rain in the morning, but sun quickly followed. He and I both made $1,500 but didn’t want to do a repeat!! Too risky!!

In spite of rumours, at the time, I did not name my dealership, Motion Lincoln Mercury, after Dizzy’s Motion car shows. I named it after Motion Performance in Baldwin, New York.

Long-time friend John Waldie called me last week to ask a favour. He liked my Junior Hanley and Herb Rogers stories and wondered if I could cover more drag racing, especially local, in my Monday blog.

I said, ‘sure, I’d love to.’ I hope to attend as many big races as possible this season and talk about them.