Next Up: Big money Canadian Short Track Nationals at Jukasa

HAGERSVILLE, ON – With the second edition of the Canadian Short Track Nationals coming up on August 31st – September 1st, Jukasa Motor Speedway Promoter and General Manager Alex Nagy and his team are hard at work ensuring the 2019 instalment of the event is an even greater success than its 2018 debut.

“We all took an immense amount of pride in how the debut of the Nationals played out,” says Nagy. “The pits were full; the stands and campgrounds were full and the drivers put on the best race we could possibly have asked for. It was a gigantic success that motivated our team to see just what we could do to make the second edition even bigger.”

When Bubba Pollard won the 2018 instalment of the race – along with its $50,000 winner’s purse – the Short Track community stood up and took notice. As a result, Pro Late Model entries from all across North America have poured into the Jukasa head office from drivers and teams looking to stake their claim at the $75,000-to-win event for 2019.

“Teams from all across Canada and the United States have been preparing for this race for an entire year now,” explains Nagy. “I expect our fans to be treated to one of the best fields they’ll see anywhere in North America.” 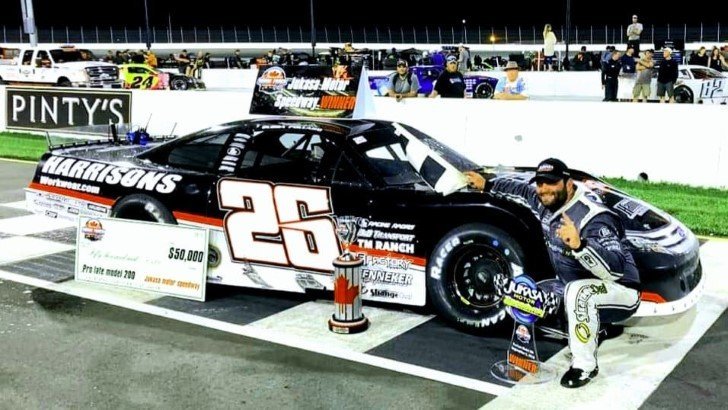 “The more this event grows the harder we want to work to make it bigger,” continues Nagy – a former Short Track competitor in his own right. “We want to build this into one of the true Crown Jewels in the industry. I couldn’t be happier with the progress we’ve made so far for this second event. Hopefully, by keeping this deal going, it will help make Jukasa a destination for fans and racers from all over.”

In addition to the Pro Late Model entry list, Sunday’s 50-lap Super Stock undercard has 46 teams entered plus Jukasa is also expecting a full field of cars for Saturday’s $10,000-to-win ‘Shootout’ for the Outlaw Super Late Models featuring all the top teams from Ontario and the USA and a full points-paying showcase for the OSCAAR Hot Rod Series.

“We’re still taking phone calls every day from teams looking to make the haul out here and be a part of the show,” says Nagy with pride. “It’s pretty incredible to see how far the word of mouth has spread.”

“This is the sort of buzz that our team was hoping to build for these races – but I’m not sure any of us could ever have expected it to happen this quickly. We’re grateful beyond words to the fans and teams that are showing interest and I can promise those that are going to be in attendance are going to be in for a show.”

In addition to a full two-day card of racing, fans will also have the chance to enjoy a concert featuring Madeline Merlo in the Pavilion on Friday night. Tickets are $10.00 for those with Canadian Short Track Nationals passes and $20.00 for those without. Advanced tickets for the races and Madeline Merlo along with camping can still be purchased at www.JukasaMotorSpeedway.com or by calling (289) 975-4999.