VARAC CHGP: The Spirit of Mosport” Can-Am cars will include a Lola T70

@VARACBoD • @CTMPOfficial • #Mosport • BOWMANVILLE, ON – On June 17-19, 2016, Mosport (now Canadian Tire Motorsport Park) will echo once again to the powerful sound of four Can-Am cars doing demonstration laps at the Canadian Historic Grand Prix. “The Spirit of Mosport” Can-Am cars will include a McLaren M8F, a McLaren M1B (tribute car), a Lola T70 and a Chaparral 1. These fabulous cars will do laps on all three days and fans will also be able to get up close and personal at “The Spirit of Mosport” static display in a large tent on the west side of the upper paddock.

One of the first monococque chassis designed specifically for the big American V8’s that were becoming a force on the international big-bore sports racing scene in the mid-60’s, the Lola T70 was first made available to eager racing customers for the 1965 season. 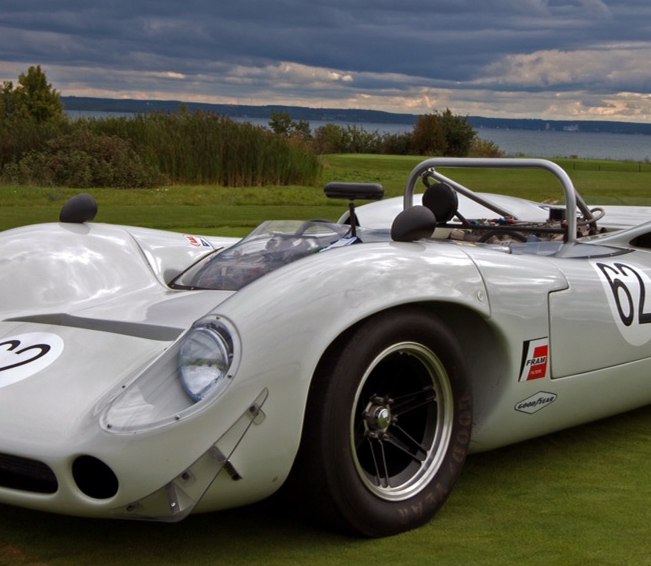 In the hands of such aces as John Surtees, Denis Hulme, Mark Donohue and Brian Redman, it quickly established a reputation as one of the fastest sports racers money could buy. This particular car is one of the Mark II versions developed by the Lola factory over the course of the T70’s first year of competition.

The car was imported to the United States at the end of that year by the American Lola distributor, John Mecom. This Lola was originally fitted with a Ford 289 engine and the Hewland LG500 transaxle that had by that time become recognized as the best bet for harnessing the big torque of a race-prepared V8 in a rear-engined configuration.

1966 however marked the first year of the CAN-AM series and by the time the car appeared in a couple of that year’s late-season races in the hands of Californian driver Norman Smith, it had acquired the 5.9 litre Chevrolet V8 that most CAN-AM entrants considered standard wear for the series.

Interestingly, Smith’s small team obtained some sponsorship support for what must have been a fairly expensive racing adventure from aspiring politician Ronald Reagan’s 1966 California gubernatorial campaign, but didn’t return to the series after the 1966 season.