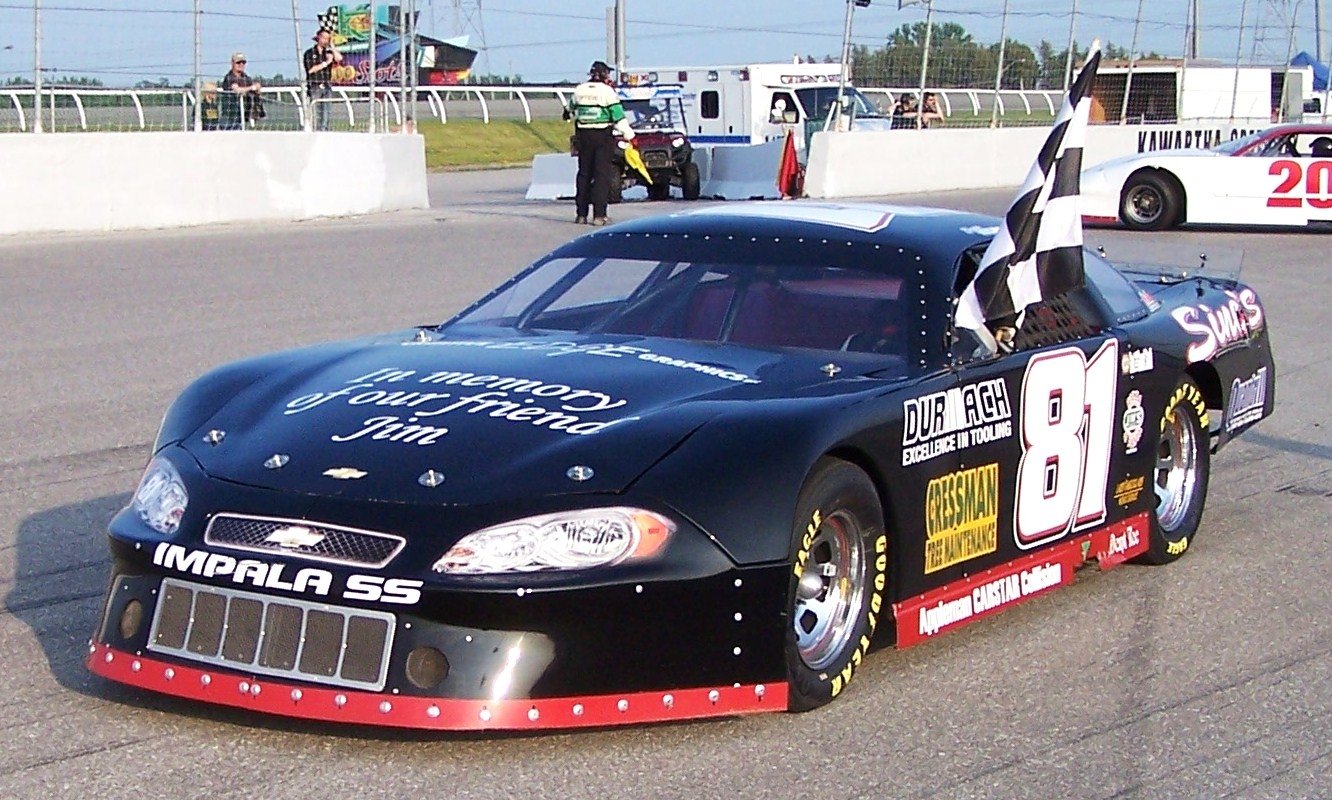 Close.  They say it only counts in horseshoes (and occasionally hand grenades).  Midway through Kawartha Speedway’s 2011 season, it looked like Port Hope, Ontario’s Bryan Mercer was close to earning his first career NAPA Auto Parts ACT Late Model track championship. After scoring a 3rd place finish on opening night, the 15 year veteran racer picked-up a convincing win in the season’s first 100 lap invitational – his first main event win since 2006.  Another 3rd place effort Friday, June 24th was followed by a history making triumph in the 8th annual running of the 150 lap Summer Sizzler and a $3,000 payday.“Between the final checkered flag of 2010 and first green of 2011, our car spent a lot of time on either jackstands or a jig,” said Mercer.  “We stripped off the body panels and sent the car to Mike McColl’s shop in London, Ontario.  They updated some of the geometry and other components during the winter.  It really made a difference to how the car felt and handled.  Our 2007 Monte Carlo felt like a brand new piece every time we took to the track.  I’ve been told a number of people thought it was a brand new car.”

The strong, early season showings placed Mercer and his #81 Sine’s Flooring/Durmach Tooling/Creative Edge Graphics/Jim’s Pizza, Port Hope/Quantrill Chev-Buick-GMC Cadillac/Cressman Tree Maintenance/UAP NAPA, Port Hope/Appleman CARSTAR Collision/ Dent Tec/True2spl Windshield Repair/Clarke Motorsports Communications Chevrolet in a comfortable, albeit not commanding lead atop the Fraserville 3/8th miler’s headline division standings.  As anyone who is familiar with the world of short-track racing will tell you, things can often change in the length of a straightaway; or in Bryan Mercer’s case, the turn of a corner.

“No matter how much I’d like to erase that night from my mind, I’m sure I’ll never forget the incident from Friday, July 15th,” said Mercer. “I was coming through turns 1 and 2 in the semi feature.  I’d already won a heat race, so that meant starting near the back.  Another car and I went into the corner running close together and we made contact.  I don’t know if he didn’t know I was there or if the car just broke loose.  No matter how it happened, it was frustrating and may have cost us the championship.”

In a sportsmanlike gesture, Bryan Watts offered the use of his car for the main event, but the 38 year-old father of 3 could only muster a 9th place finish in the unfamiliar piece.  With just a week before the next event, crew chief and father Ron Mercer along with Shane Crombie, Dave Dennis, Jeremy Dennis, Donny Dennis, Dylan Fraser, Danny Langstaff, Mike Lagrois and Terry Stark went to work to get their damaged machine ready for a trip to McColl Racing Enterprises to have a front clip updated.  The car made its return Friday, July 22nd, but a second place finish was its best showing in the year’s final 6 events.  A fluid leak on the final night of the season saw the black bow-tied beast with the patented showroom shine loaded into the hauler after only a couple of laps in the night’s first qualifying heat.

“Finishing 5th in points – especially after running so well at the start of the year – was a bitter pill to swallow,” said Mercer.  “On the positive side, we were only 1 point out of 4th and found what it takes to win.  As a team, that makes us more determined to come back even stronger when the 2012 season gets underway.”

Mercer says he likes the competition and challenge of racing and the friends he’s made over years.  The graduate of the thunder car and challenger divisions would like to see a more uniform set of rules from track to track to allow the drivers to travel more.  He’d also like to take a stab at the NASCAR Canadian Tire Series before calling it a career.  To learn more, see www2.creativeedgegraphics.com/mercer.

Be sure to visit www.kawarthaspeedway.com for details on the on-line voting for most improved and most sportsmanlike drivers in each of the 3 regular divisions.  Winners will be announced at the annual awards banquet Saturday, January 14th.  The 2012 season kicks-off Sunday, February 5th with the 3rd edition of the Long John 200 Endurance event.  Kawartha Speedway will also be part of the Canadian Motorsports Expo – presented by Inside Track Motorsport News – February 10th, 11th and 12th at the International Centre in Toronto.  See www.canadianmotorsportsexpo.com for the full schedule.