Running second to Logano, Buescher made a move to the inside on the backstretch on Lap 60. Logano moved down to block, and contact between the cars sent Logano’s No. 22 Team Penske Ford into the outside wall, crippling the car.

The accident caused the only caution of the night, with Buescher in the lead when the fields was frozen at the moment of the yellow flag. Defending DAYTONA 500 winner Michael McDowell was second and Harrison Burton was credited with third after nosing into Logano’s Ford.

In contrast, the first Duel—the first points-paying event with the NASCAR Cup Series’ new Next Gen race car—ran without incident, and Keselowski led a 1-2-3-4 Ford sweep with a pass of Ryan Blaney with four laps left. Austin Cindric was second, followed by Blaney and Chase Briscoe. 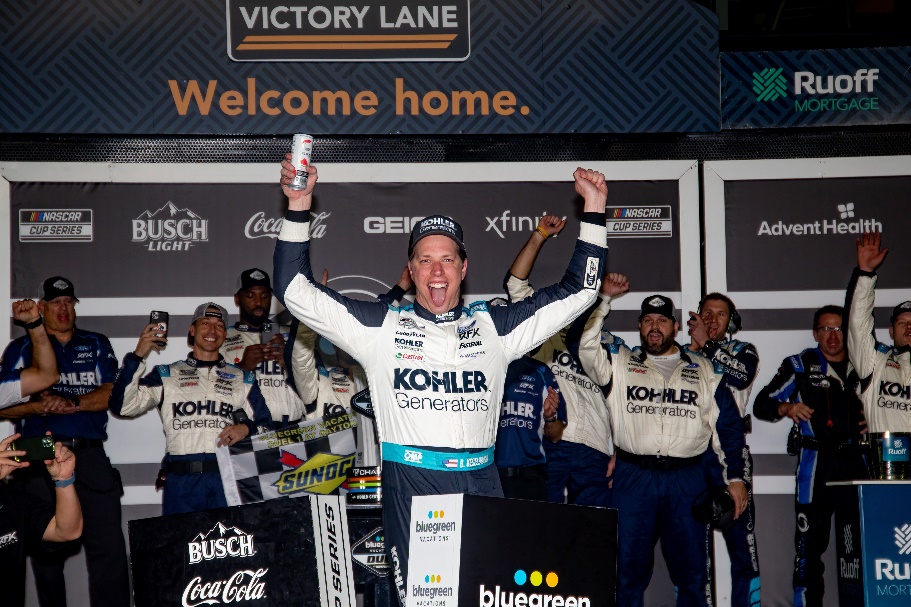 In that race, Kaz Grala rallied from a pit road speeding penalty and advanced to the DAYTONA 500 with a pass of JJ Yeley on the final lap. In the second Duel, Greg Biffle claimed the final spot in Sunday’s race with a 13th-place finish, eliminating Timmy Hill, who ran 20th.

But the excitement was reserved for the final lap of the final race, with Logano acknowledging the mistake that broke up another 1-2-3-4 Ford finish.

The beneficiary was Buescher, who finished off the first sweep of the Duels by one organization since Hendrick Motorsports accomplished the feat in 2015 with Dale Earnhardt Jr. and Jimmie Johnson.

“Yeah, what a way to start Speedweeks out here, to put both RFK Ford Mustangs in Victory Lane, give Fastenal their first win on a Cup car,” Buescher said. “It’s not the big show, but we’ve got a really good hotrod here.

“Just hats off to everybody back at the shop. I know it’s been a hectic off season for everybody in our sport, but we’ve had a lot of changes going on, and it’s cool to see it play out.”

A rueful Logano gave a succinct post-mortem of the wreck that will force him to a backup car for the Daytona 500.

“Driver screwed up,” Logano said. “That’s really all there is to it. “I thought I was still clear, and the run (from Buescher) came a lot quicker than I thought it would.

“I tried to block it a little bit and just got a tag in the left rear, and off it went. It’s my fault. It stinks, because it tore up our car and kind of puts us in a spot as a race team. It’s just a dumb mistake.

In the first Duel, new team co-owner Keselowski passed his former teammate Blaney to notch his first victory as a principle at Roush Fenway Keselowski Racing. NASCAR Hall of Fame owner Jack Roush joined Keselowski in Victory Lane after the race with smiles all around at the newly-reorganized Ford team’s first points-paying outing.

“It sure is (a great start),” said Keselowski, who will now start third in the DAYTONA 500. “I felt pretty good about our car in practice on Tuesday.

“I’ve got to give credit to the other Fords. We worked really well together, Ryan Blaney, Chase Briscoe. We had great strategy… Austin Cindric… and we stuck together and drove away and got ourselves in position where we could control the finish of this race, and I’m happy to see all those Fords up front.

“Good job to all those guys’’ said Keselowski, whose No. 6 Ford carried a sticker honoring his father Bob, a former NASCAR competitor who passed away Dec. 2, 2021.

“This is special,” Keselowski said.

DAYTONA 500 polesitter and reigning NASCAR Cup Series champion Kyle Larson led a race best 34 of the 60 laps in Duel #1 but lost the lead when he and his Chevrolet teammates took four tires on the race’s only pit stop. The Ford teams took only two tires.

The first Duel set the inside line of the 40-car Daytona 500—with cars lining up on the inside of the grid behind pole winner Larson according to their finish in the qualifying race. Hendrick Motorsports’ driver Chase Elliott, Erik Jones, Larson, Tyler Reddick, Kurt Busch and Ross Chastain rounded out the top 10 from the opening Duel.

The second Duel determined the order of the outside row, with drivers lining up according to finishing order behind Alex Bowman, who secured the second starting spot in Wednesday night’s qualifying session. Kyle Busch finished fourth behind the three Fords, with Joe Gibbs Racing teammates Christopher Bell and Martin Truex Jr. behind him.

Bubba Wallace ran seventh and Ricky Stenhouse Jr. eighth. Logano was credited with a lead-lap finish in ninth but will start from the rear on Sunday in his backup car.

Grala earned the transfer position from Duel 1 with a stunning last-lap pass of J.J. Yeley to put the No. 50 TMT Racing Chevrolet in the big show—much to the delight of Grala and his new The Money Team Racing team owner, boxer Floyd Mayweather.

“It’s a relief I can tell you that,” Grala said. “I thought we weren’t going to make it for a bit.

“But got the hiccups out the way, and hopefully will have a smooth Sunday,” he added, thanking Kurt Busch for allowing him to re-join the field’s established racing line after receiving a pit road speeding penalty with 24 laps to go.

After the penalty, Grala ran behind Yeley but said he never gave up hope and never got off the gas. He was able to make the pass coming out of Turn 2 on the final lap.

“Right down to that last lap, there was no relief,” Grala said. “The key was our line staying formed up and being able to roll by him and him not having a chance to hop down in front of anybody.

“Definitely took years off my life.”

Biffle had a much easier time than Grala, given that Hill fell off the lead lap early.

“It feels really good,” said Biffle, who returned to the Cup Series to drive for the NY Racing Team headed by John Cohen. “I’ll tell you, I have not slept much in the last couple days just trying to keep a cool composure.

“I’ve been nervous about this race because there’s so many things that can happen and so many ways it can go.”

Notes: Already locked into the Daytona 500 on speed, the Open car of Jacques Villeneuve had an issue with its throttle cable and was late to the pace laps for the second Duel. Villeneuve quickly lost the draft and fell behind, then retired from the race in 21st place on Lap 39.

While the DAYTONA 500 is sold out, there are still plenty of exciting ways to experience the pageantry of Speedweeks Presented By AdventHeath with an excited lineup of super-competitive races. For ticket information, log onto www.daytonainternationalspeedway.com or call 1-800-PITSHOP.

Fans can stay connected with Daytona International Speedway on Twitter, Facebook and Instagram, as well as the all-new NASCAR Tracks App, for the latest speedway news.

About Daytona International SpeedwayDaytona International Speedway is a state-of-the-art motorsports facility and was awarded the SportsBusiness Journal’s prestigious Sports Business Award for Sports Facility of the Year in 2016. Daytona International Speedway is the home of The Great American Race – the DAYTONA 500. Though the season-opening NASCAR Cup Series event garners most of the attention – as well as the largest audience in motorsports – the approximately 500-acre motorsports complex, also known as the World Center of Racing, boasts the most diverse schedule of racing on the globe. In addition to at least nine major event weekends, the Speedway grounds are also used extensively for events that include concerts, civic and social gatherings, car shows, photo shoots, production vehicle testing and police motorcycle training. The iconic venue will be the site of a host of motorsports events early in 2022, beginning with AHRMA Classic Motofest and the Rolex 24 At DAYTONA in January, and the 64th DAYTONA 500, which will debut the first points race for NASCAR’s ‘Next Gen’ car as part of Speedweeks Presented by AdventHealth in February. The tradition-rich 81st Annual Bike Week At DAYTONA returns in March, featuring DAYTONA Supercross and the DAYTONA 200, and in May with the Heroes Honor Festival. Later in the summer during Independence Day weekend, the track, in association with Torneos, will host Soccer Fest before the NASCAR Cup Series returns for the final race of the regular season with the Coke Zero Sugar 400 on Aug. 27.

Unfinished Business For White At Daytona