BOWMANVILLE, ON – With just five race weekends remaining on the Canadian Tire Motorsport Park Speedway calendar, it is hard to imagine that anything could top the spectacle witnessed last Saturday at the half-mile oval. Blown motors, multi-car crashes, a first time feature race winner and a night-ending, spectacular fire courtesy of Jeff Bell’s shattered transmission, were all part of the Saturday night show. Fortunately, all drivers emerged unscathed, only their racing machinery (and a rather large patch of grass in Turn Three) will need attention this week.

Late Model
Careful observers noted that there were six former track champions in the Late Model field last Saturday, and not too surprisingly, three of them, Darren Kearnan, Kyle Donaldson and Mark Gordon, found themselves at the head of the pack approaching the mid-point of the Late Model feature.

What took everyone by surprise was that, following Richard Boake’s retirement of the #90 Impala due to a blown motor, his teammate Kyle Donaldson suffered distributor failure on lap nine. With the fans still buzzing, Darren Kearnan then slowed on the front straight, and he was forced to accept a push from the Bob’s Towing wrecker to get him back to pit lane.

Fortunately, Kearnan’s issue was simply a loose ignition wire on the distributor beneath the hood of the #55 Harrington’s Mobile Mechanics/RMJ Trucking Chevy, and he was able to rejoin his Late Model compatriots, albeit at the tail end of the pack.

Back under green on lap 11, Gordon took control of the situation and began to gap his rivals. Mired well back in the Late Model field, Kearnan was on a charge, but found himself balked behind an on-going battle raging between John Baker Jr.(#23 Freeman Motorsports Ford) and the #01 Matco Tools Chevrolet of Shannon Kimmerly. Desperate to pick up pursuit of the rapidly disappearing race leader, on lap 14, Kearnan lunged between Baker and Kimmerly, going up the middle in a three-wide sprint down the back straight, eventually emerging in the runner-up position.

Narrowing the gap slightly, Kearnan simply ran out of laps, his challenge falling four car lengths shy, with the #52 Boston Pizza Impala SS carrying Mark Gordon to the feature victory, his second of the season. 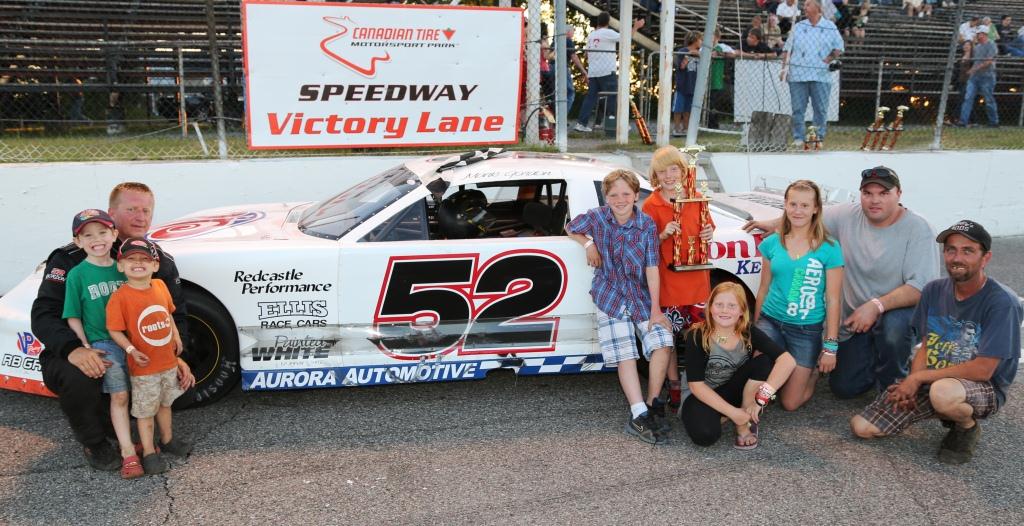 “Wow, I can’t believe what happened out there, with Richard, Kyle and Darren all having problems,” stated Gordon. “I had a third place car tonight. I was just as fast as they were, but not quite fast enough to get past them.” Swapping positions four times over the final seven laps, Shannon Kimmerly was finally able to make the pass over Baker stick on lap 18, securing third place, with ‘JBJ’ and Bob Kish (Rapid Racing #78) rounding out the top five finishers.

Starting from the outside of the second row, on lap three Baker aimed his #63 Marksmen Club of Oshawa/John baker’s Auto Impala to the high line, going three-wide into the third corner and emerging with the race lead over Dale Wood (#10) and the #2 Cormier Transport Monte Carlo of Tom Cormier. With Wood hanging tough, Baker edged away from the pack, eventually taking the checkers four car lengths from Wood.

“Dale has done a lot of work on the car this week and he’s really stepped up the pace,” commented Baker. “The officials have adjusted the weights in the cars to balance the field. My car is still a rocket ship, but things are a lot closer now.”

“Jeff (VanderBelt) told me that I needed to push harder through the corners, that the car could handle it. I took his advice and look where it got me,” said Mulders. 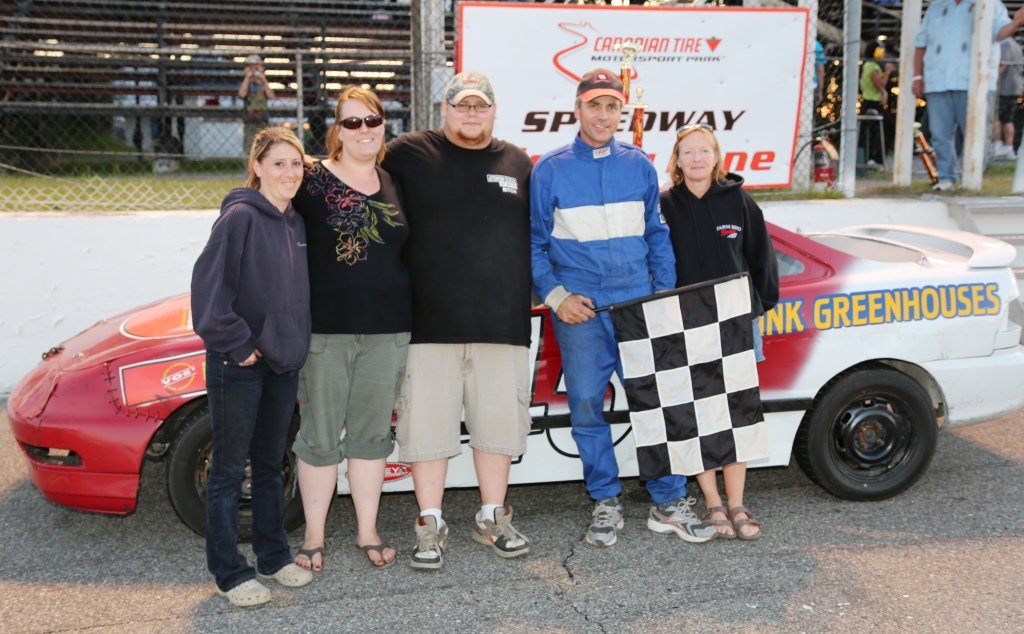 Where it got the driver of the #45 Vos’ Independent/Link Greenhouses Acura was the Winner’s Circle, for his first career Feature race win. Stretching his advantage, Mulders accepted the checkered flag six car lengths in front of the #70 Superior Transmissions/Toronto Body Parts Prelude of Corey Hayward.

“I made a good start, had the outside lane and was able to pull away,” explained Mulders. “We can pass on the outside coming to the green flag, so I made sure that the lane as closed and that no one could get a run on me. I really need to thank Jeff (VanderBelt) for the advice, and I must remember to thank my wife for the inspiration and support.”

Hayward, who took the green flag from the second-to-last row of the grid, was forced to pick off his opponents one at a time, eventually clearing the #54 Crowe Brothers Roofing mount of Kevin Vande Beek on lap 12 to assume the runner-up position. Inching closer to the long-gone race leader, Hayward ran out the laps and settled for second place, three car lengths up on Vande Beek. Jeff VanderBelt (#33) held off a persistent Willy Howells (#19 Honda) for fourth spot following a race long, nose-to-tail battle.

While sitting in third place behind race leader Brad Stevenson (#77) and step-father Bill Pickford (#61), Brown was somehow able to avoid a five-car melee on lap five, ultimately slipping through the on-going carnage to assume the runner-up spot behind Stevenson, the invited hired gun in Brian Strawn’s #77 I&I Construction Modified.

Fortunately, most of the involved cars were able to continue, the only casualty being the #46 TTR Transport car of points challenger Darren Kearnan.

Eventually back under green flag conditions, Brown (#2 Bourque Transmissions) went into full ‘stalk’ mode, hounding Stevenson through every corner. Accepting the wide, outside line, Brown went side-by-side with Stevenson for three full tours of the half-mile Speedway, snagging the lead as the pair entered the first turn on lap 15. Stevenson refused to readily concede the position, holding on tightly to Brown’s back bumper until the red flag was thrown on lap 23, the emergency declared to attend to a spectacular oil-fueled fire, a result of the shattered transmission from Jeff Bell’s #95b Mod. 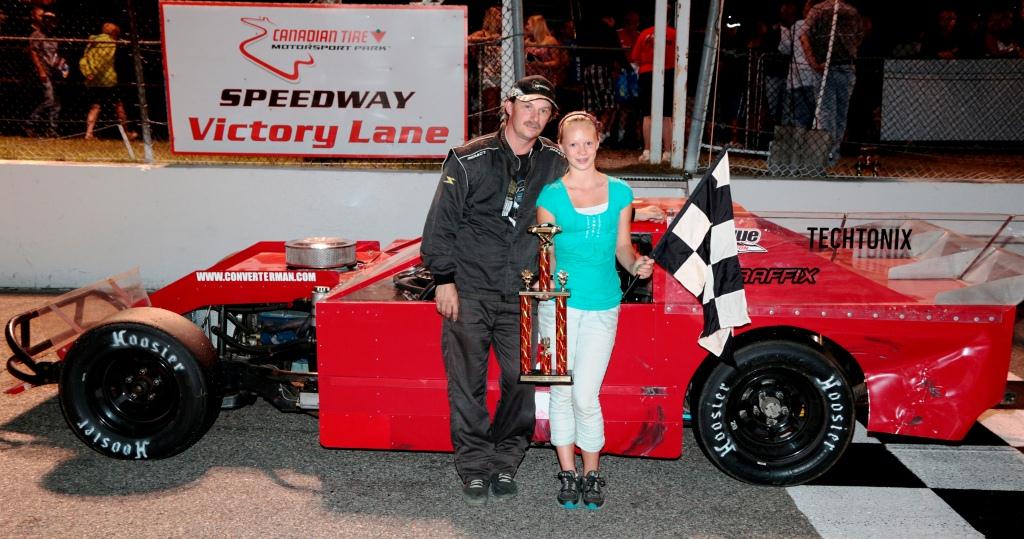 “Brad did a great job tonight for the first time in the car,” said Brown. “I’ve never raced against him before, but I knew what kind of a driver he was. I completely trusted him; I knew that he wouldn’t do anything dangerous. That trust let us have a great race together tonight.”

MERRITTVILLE: The Big Blocks are heading to Merrittville