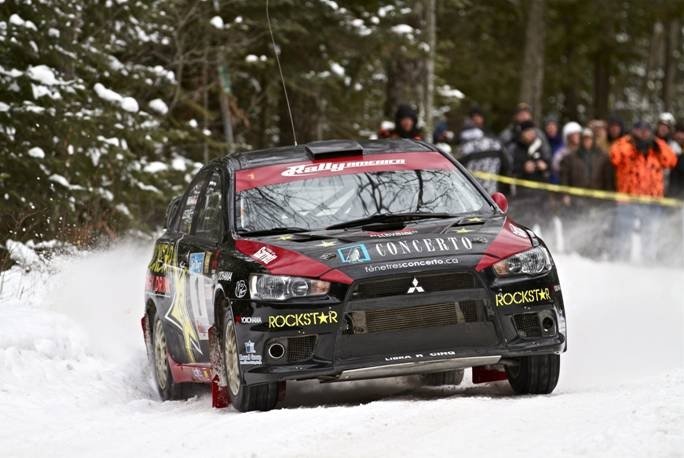 Montréal (Québec), January 25th, 2012. – Reigning Canadian and North American Rally Champions, Antoine L’Estage (of St-Jean-sur-Richelieu, Qc) and Nathalie Richard (of Halifax, NS) will return to competition this weekend as the 2012 Rally America series kicks off with its only winter event on the calendar.  The SnoDrift Rally, the first of six rounds in the American series, will celebrate its 46th anniversary on the snow and ice-covered roads in and around Atlanta, Michigan.  L’Estage and Richard, who narrowly missed out on a second consecutive Rally America title in 2011, will debut their brand new Mitsubishi Evo X this weekend.

Rockstar Energy Drink team driver Antoine L’Estage is looking forward to getting back to competition after a two-month hiatus since the final round of the 2011 Canadian Rally Championship and the North American Rally Cup.  John Buffum, rally legend and owner of Vermont-based Libra Racing, just completed the build of a brand new Mitsubishi Lancer Evolution X for the Rockstar duo and with a successful test a few days ago, the entire team eagerly awaits Friday’s rally start. « Antoine and I both love competing in winter conditions.  This year, we are expecting less snow in Michigan than we’ve generally had in the past, which can make for an extremely challenging two days.  He’s a fantastic driver and that definitely holds true on snow and ice » shares co-driver Richard. « And regardless of what conditions we are faced with, we have a great selection of Yokohama tires to choose from she adds.

With the start of a new season and the debut of a new car, the team is also pleased to announce their new partnership with Formica Group, an industry leader in the design, manufacture, and distribution of innovative surfacing products. « I’m thrilled that Formica will be joining our already impressive line-up of committed partners and we expect this to be the start of a long and strong relationship » confides L’Estage. « We have had such a successful past two years, winning the Canadian and North American titles both years and the Rally America title once.  With this new car and our devoted partners and fans, we’re ready to start yet another amazing season.

“ROCKSTAR is the world’s most powerful energy drink. Enhanced with the potent herbal blend of Guarana, Ginkgo, Ginseng and Milk Thistle, ROCKSTAR is formulated to provide an incredible energy boost for those who lead active and exhausting lifestyles – from athletes to rock stars.