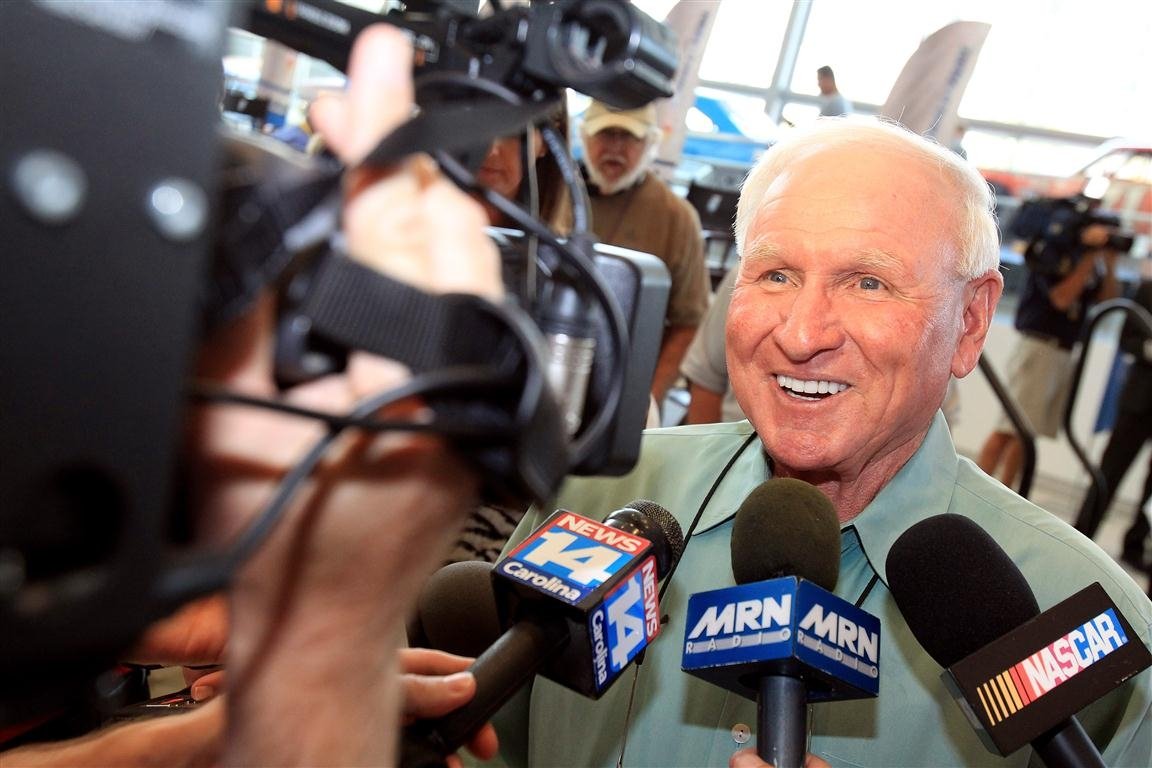 DAYTONA BEACH, Fla. (Jan. 4, 2012) – Larger than life. Those three words describe Cale Yarborough – before the Sardis, S.C. native even became a racing legend who will be inducted along with Richie Evans, Dale Inman, Darrell Waltrip and Glen Wood on Friday, Jan. 20 as the third class of the NASCAR Hall of Fame.

Now 72, Yarborough flew an airplane without benefit of lessons, somehow forgetting that flight was easy; but landing was another story. He wrestled an alligator and survived being struck by lightning.

At 5-feet-7 inches and 130 pounds, he was a ferocious prep fullback and linebacker at Timmonsville (S.C.) High School and likely could have been a collegiate football star. He “worked out” wrestling bales in a tobacco barn and credited that labor with making him one of the era’s most fit competitors. And in his spare time, Yarborough drove a school bus.

Oh, and Yarborough was ejected – three times – from his first race, the 1957 Southern 500 at Darlington Raceway – because NASCAR officials found out he’d lied about his age on his license application. The 18-year-old, who said he was 21, qualified 44th. He’d hidden on the Ford’s floorboards and took the wheel as owner Bobby Weatherly exited while inspectors’ were looking elsewhere.

Yarborough actually started the race – wearing a helmet and goggles, he got “lost” in the pre-race crush – but received a quick black flag when it was apparent the driver of the No. 30 car was not Weatherly.

From those beginnings, William Caleb Yarborough became the first to win three consecutive NASCAR premier series championships (1976-78) and three times finished second in the standings. During a career that began ignominiously in 1957 and concluded after the 1988 season, Yarborough won 83 races – sixth on the all-time list.

What had become a dynasty ended after the 1980 season – leaving, many say, more victories and championships on the table. Yarborough, whose father was killed in a plane crash when he was 11, felt he needed to spend more time with his children and never again pursued a full-time driving schedule. Ironically, the seat in Johnson’s Chevrolet went to Waltrip who won championships in 1981-82 and 1985.

“I gave up a lot but I gained a lot more,” he wrote in his 1986 biography “Cale,” a book co-written with Bill Neely. Fourteen of Yarborough’s victories – including the 1983 Daytona 500 and his fourth Southern 500 – came in the post-Johnson years behind the wheel of cars owned by M.C. Anderson and Harry Ranier.

Yarborough fielded his own team between 1987 and 1999 employing among others Dale Jarrett, Derrike Cope and John Andretti. Andretti scored the organization’s lone victory in July 1997 at Daytona International Speedway.

Growing up, Yarborough considered himself a risk-taker. If the tree limb from which he and his friends hung the tire over the swimming hole wasn’t high enough, Yarborough would find a way to make it higher. He built an 80-foot platform to dive into the Lynches River – which was only five-feet-deep.

That went well, at least until Yarborough came up and touched a log that wasn’t a log but an alligator. “There was no way I could outswim him to the banks so I did the only thing there was to do,” he wrote in “Cale.” “I grabbed him around the head. It rolled and rolled. First I saw the sky; and then my vision was blurred by the sandy river bottom.”

Yarborough and the gator made it to the bank where friends drove the reptile off. “Aside from swallowing about half the Lynches River and looking like I’d been in a hatchet fight, I was all right,” said Yarborough. “I hoped I had given up alligator wrestling for all time.”

His first taste of wheeled competition was the Soap Box Derby for which he and his father, who owned a general store and cotton gin, built a car. Yarborough lost his first race which turned out to be a sobering experience that would remain with him throughout his racing career.

“I never forgot how bad it felt to lose,” he said.

Getting his driver’s license at age 14, Yarborough’s first car was a Model A Ford he purchased working for 25 cents an hour in the tobacco warehouse. He and his friends would race on the long, straight rural roads around Sardis and Timmonsville. “One of the old timers in Sardis said to me, ‘every time we heard a fast car go by, we’d say there goes Cale.'”

Yarborough bought a 1953 Ford coupe while a senior in high school, tuned it up, painted his football number – 35 – on the doors and with friends towed it to a local dirt track. He finished third in his first heat race, the last car running. That was all it took.

“There was metal scraping and dust flying everywhere,” he said. “Man, this sure beat anything I had ever done. I was as happy as a kid in a candy store.”

Yarborough soon was driving for others. His car lacked power and Yarborough lacked money to make it faster.

Yarborough drove for fellow Hall of Fame inductee Glen Wood from mid-1966 through 1970 winning 13 times. They won three consecutive races at Daytona International Speedway in 1967-68 including the 1968 Daytona 500.

Yarborough admits he hated to lose. He ranks ninth all-time with a 14.77 winning percentage. “When you get right down to it, there are only two parts to racing: winning and losing,” he wrote in 1986. “No second, third or fourth. You win or you lose.”

Emmy Award-winning NASCAR Media Group produced a biography series of all five 2012 NASCAR Hall of Fame inductees that are currently airing on SPEED. The series started on Friday, Dec. 9 with back-to-back shows featuring Cale Yarborough and Dale Inman, followed by the feature on Richie Evans on Friday, Dec. 16. A re-air of the Yarborough biography will broadcast on SPEED on Jan. 22 at noon ET.