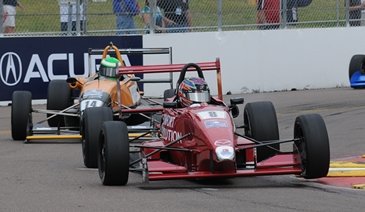 PALMETTO, Fla. – The Cooper Tires Presents the USF2000 National Championship Powered by Mazda today unveiled its 2012 schedule which will see the first step on the Mazda Road to Indy ladder system increasing to 14 races at premier venues in support of INDYCAR and American Le Mans Series events. Three permanent road courses, two street circuits and one oval highlight the calendar, as well as the series’ first tripleheader event. One additional doubleheader venue will be announced in the near future.

“I am very pleased with our schedule for this season,” said Dan Andersen, Owner and CEO of Andersen Promotions, the series promoter. “The interest in our series is at an all-time high and it is important to provide high-profile events alongside the right blend of circuits to give our drivers the best training ground and exposure. I feel we are accomplishing this. We have added two races to our schedule and, with the six-race Cooper Tires Winterfest Championship in February, we can offer our drivers 20 races in 2012. The concept of a tripleheader weekend of racing was met very favorably by our teams, and we will be pushing to add more of these going forward.”

The season will kick off with a pair of races in support of the prestigious 60th Anniversary Mobil 1 Twelve Hours of Sebring fueled by Fresh from Florida on March 15 and 16 at Sebring International Raceway. The Florida tour continues with the IZOD IndyCar season-opening Honda Grand Prix of St. Petersburg on the streets of St. Petersburg on March 24 and 25.

The series will return to Lucas Oil Raceway in Clermont, Ind., for the only oval event of the year – the annual “Night Before the 500” on May 26 – alongside the USAC Mopar National Midget Series and the Star Mazda Championship.

The month of August will be highlighted by races at two premier road courses – a doubleheader at the Mid-Ohio Sports Car Course in Lexington, Ohio, on August 4 and 5 and a tripleheader at Road America in Elkhart Lake, Wis., on August 17 and 18.

The series will return to the highly popular Baltimore Grand Prix on September 1 and 2, and soon will be announcing the site of the season finale in September.

“We are looking forward to a great 2012 season in the USF2000 Championship,” said John Doonan, Director of Motorsports, Mazda North American Operations. “The series management has done a great job in establishing the series, along with the team at Cooper Tires. We expect to see some familiar faces as Skip Barber Racing School grads move up to USF2000, along with new faces from across the country and around the world.”

In addition to an expanded schedule, the Mazda Road to Indy Summit and Oval Clinic program will return this year. A must-attend for up-and-coming drivers, the program not only provides valuable education on a variety of topics including marketing/business, media training, career growth and development and social media but also features activities such as a networking reception, shop tour and question and answer session with an IZOD IndyCar Series team and high-profile autograph sessions. Additionally, the winner of the “Night Before the 500” will pace the Firestone Freedom 100 Indy Lights field on Carburetion Day and be interviewed in front of the Indianapolis 500 crowd only minutes before the race.

“We can’t wait to showcase the USF2000 series and Mazda Road to Indy on multiple INDYCAR weekends in 2012,” said Jason Penix, INDYCAR’s Manager of Grassroots Marketing. “USF2000 is the place for career minded drivers to begin their journey to the IZOD IndyCar Series and, with the help of the Mazda Road to Indy, drivers have a clear path to the top of the sport. Dan Andersen and his staff have built USF2000 into a true destination series and we continue to see that with the announcement of new teams and drivers, along with the return of many familiar faces. In just two seasons, we’ve already seen many talented drivers race in USF2000 who exemplify the foundation and future of INDYCAR.”

The Cooper Tires Presents the USF2000 National Championship Powered by Mazda will distribute over $500,000 in prizes and awards in 2012. The winner of the Championship Class will receive a scholarship package from Mazda to advance to Star Mazda competition in 2013. The winner of the National Class will receive a scholarship package to advance to the Championship Class the following year. The series is also part of the prestigious MAZDASPEED Motorsports Development ladder which assists young drivers in advancing from the Skip Barber Racing School to USF2000.

About USF2000:  Sanctioned by INDYCAR and managed by Andersen Promotions, the series is the first official step on the Mazda Road to Indy ladder system. The top driver in the Championship class will earn a scholarship package from Mazda to advance to the Star Mazda Championship. The series also is part of the MAZDASPEED Motorsports Development Ladder program which assists young drivers in advancing from the Skip Barber Racing School to USF2000.

About Mazda:  On any given weekend, there are more Mazdas on the road-race tracks of America than any other brand of vehicle. At the track, you’ll see MX-5 Miata, RX-8, MAZDA3, MAZDA6, RX-7 and other vintage Mazda models competing, because every Mazda has the Soul of a Sports Car. In fact, the largest road-racing class in the world is Spec Miata, with more than 2,500 first- and second-generation Miatas tearing up America’s racetracks, making it the most-raced production car in the world. Mazda’s involvement in motorsports extends to its relationship with INDYCAR, Mazda Raceway Laguna Seca, one of the world’s premier road-racing circuits, and the Skip Barber Schools for driving and racing.

About Cooper Tire & Rubber Company: Cooper Tire & Rubber Company is a global company with affiliates, subsidiaries and joint-ventures that specialize in the design, manufacture, marketing and sales of passenger car and light truck tires. The Company also has subsidiaries that specialize in medium truck, motorcycle and racing tires.

With headquarters in Findlay, Ohio, Cooper Tire has manufacturing, sales, distribution, technical and design facilities within its family of companies located in 10 countries around the world.