Thompson Closes In On Championship With Win At Indianapolis Motor Speedway

HEADLINES: Parker Thompson Claims First Pole at Indianapolis Motor Speedway … Thompson Leads Field of 32 from Start to Finish for Fourth Win of the Season … Parker Gets Collected in a Turn One Crash Ending his Bid for Back to Back Race Wins

Parker Shows Pace Early and Often in All Sessions of the Weekend
Thompson Wheels the No. 9 Byers / Shell TapUp Porsche into Championship Lead After First Race of the Weekend
Ominous Sunday Weather Mirrors Race Two with Thompson Innocently Involved in Turn One Incident Handing Him First DNF in Carrera Cup North America Competition
Off to Road Atlanta to Decide the Championship as Thompson Trails by only 11 Points. 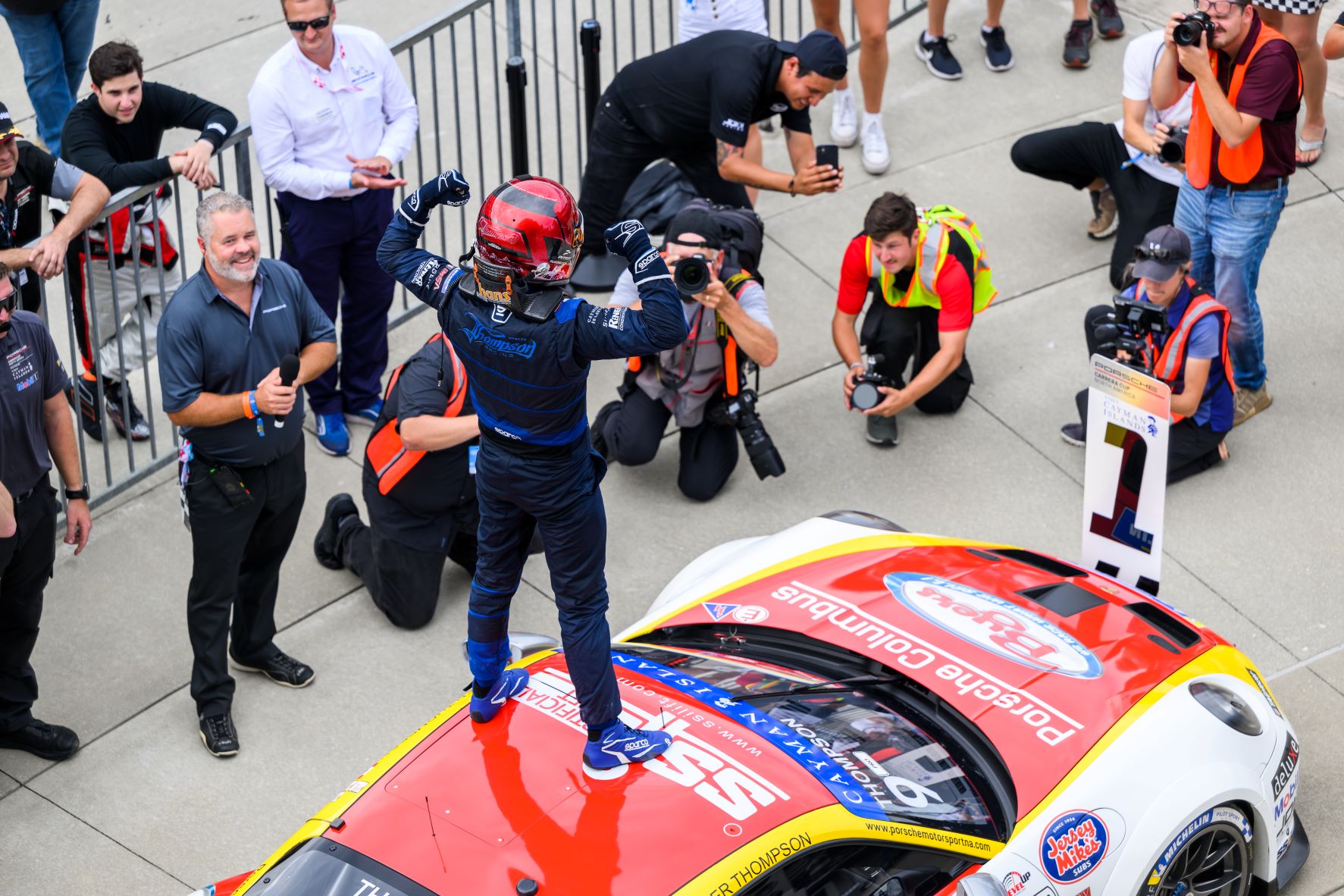 PARKER THOMPSON:
“A tremendous weekend here at Sports Car Together Fest with Porsche! We had a great group of people on site here, and the whole crew had an incredible time. Indianapolis Motor Speedway has always treated me well, and it certainly did that again here in Race 1. I need to give tonnes of credit to our partners off the track, Shell Tap Up, Surgere, Byers Porsche, Renier Construction, SSi Artificial Lift, Jersey Mike’s Subs, and especially my engineer Luke and the team at JDX Racing. The No. 9 was on rails. I had complete confidence in my ability to win here this weekend. Unfortunately, in Race 2 we got collected by another driver, and our day ended early. Sometimes that’s racing. There was nothing I could do. The big thing is that we are in a better position than we were when the weekend started. We knew this season would come down to the final two races at Road Atlanta. We’ll be ready.”

JEREMY DALE, MANAGING PARTNER/JDX RACING:
“As they say in life, sometimes you’re the windshield and sometimes you’re the bug – well that was our weekend in Indy. Saturday was a
brilliant day, qualifying on pole and leading every lap of the race – and in the process taking the points lead in the championship. Sunday could not have been more different – starting P2, getting shuffled back on lap one, and then getting taken out due to a mechanical car
failure of one of our competitors. Our first DNF since we started racing in Carrera Cup.”

“Life is strange sometimes, but as Parker said, we came into the weekend 15 points back and we came out 11 back – so that’s a gain. Talk about having the attitude of a Champion! There are 56 points on the table at Road Atlanta and we are going there with one goal in mind – win a championship for Parker and JDX Racing.

About JDX Racing: Founded in 2008 and based outside of Denver, CO, JDX Racing represents the very best in professional motorsports. Competing in the IMSA sports car series, JDX Racing campaigns cars in eight events throughout North America. JDX Racing features world-class drivers, outstanding crew members, and dynamic marketers from Champ Car, IndyCar, NASCAR, ALMS, and the ChampCar Atlantic Championship series. For more information, follow us on Facebook at facebook.com/jdxracing, on Twitter @JDXRACING, and on Instagram at jdxracing.

Be sure to check out our sponsors, Shell TapUp, Sugere, Renier Construction, SSI, Jersey Mikes Subs