ORLANDO, FL – The FIA NACAM PanAm GP Series had a booth at the recent PRI Trade Show in Orlando, Florida. While there, the series unveiled its plans to expand to the United States in 2013. The tour will host its new Winter Series in Florida, in February and March, with a four-race mini-series. The start of the regular season will commence, back at Homestead, in mid-April.

“After racing all over Latin America, we are very proud to confirm that the PanAm GP Series will hold its inaugural Winter Series with four races in two rounds at Homestead and Palm Beach,” said series promoter Alfonso Toledano. “This will be a great opportunity for young talented drivers to race in Formula 3-like open wheel racing cars that have the latest in cutting edge motorsports technology.” 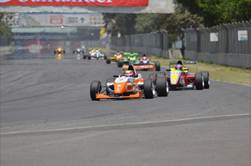 “We are also confirming that the start of the 2013 regular season of the PanAm GP Series will start on April 14 at Homestead-Miami Speedway. From there, it will go to Mexico, Costa Rica, Colombia, Ecuador, Chile and other interesting Latin American venues,” continued Toledano.

“Our aim is to produce a new generation of drivers with the necessary skills to race in Europe’s top divisions and eventually compete in Formula One. We have the support of Ferrari Driving Academy that will help us develop talent.”

Thermo-Tec Boosts Support For Grassroots Racing In The USA

A New Chapter For The Birthplace Of Champions