THE CANADIAN MOTORSPORTS EXPO RETURNS FOR A SIXTH YEAR WITH A NEW DATE AND A BIGGER VENUE!

by Jeff Morgan
in Breaking News
0 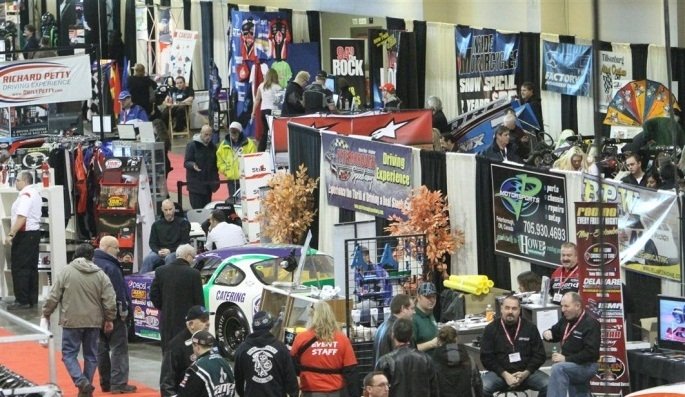 Almost 80 percent of the available exhibitor space has already been filled!

(TORONTO, ON // December 12, 2011) The 6th Annual Canadian Motorsports Expo, Powered by Inside Track Motorsport News takes place February 10, 11 & 12, 2012 at the International Centre, adjacent to Toronto’s Pearson International Airport. New for 2012, the CME will be held on a new date, in a bigger hall.

Responding to exhibitor and attendee feedback, the show has been moved back in the calendar – by several weeks – to be closer to the start of the racing season. The CME’s new date is two weeks prior to NASCAR’s Daytona 500, at a time when Canadian racers and fans are making their plans and purchasing decisions for the upcoming racing season.

The Canadian Motorsports Expo will once again take place at the International Centre, but it’s moving to the bigger Hall 6, which offers considerably more space (80,000 square feet). Hall 6 is also more wide-open than the show’s former space, which means the CME will be better able to accommodate more exhibitors, tracks, series, vendors and racing vehicles.

Also new for 2012, the CME is the only Winter / Spring show at the International Centre permitted to offer more than 10% racing content, so there is no question about where the real racers, fans and industry members will be in February!

“We’re just inside of two months to go until show-time and the response to the 6th Annual Canadian Motorsports Expo has been fantastic,” said the CME’s Greg MacPherson. “So far, almost 80 percent of the available exhibitor space has already been sold. The racing industry is really getting behind the CME and has responded positively to the new February date and the move to Hall 6. We have some great new partners and features to announce in the coming weeks.”

On the opening day of the CME (Friday, February 10), highlights will include the presentation of the Inside Track Readers’ Choice Awards and Spencer Lewis’ Ontario Asphalt Power Rankings Top 10 Awards. Saturday’s schedule (February 11) will feature the celebrity racer Q&A and autograph sessions, the Meet the Media Fan Forum and several other interesting and informative presentations. On Sunday (February 12), CASCAR founder Tony Novotny and several well-known racing personalities will take a trip down memory lane during the CASCAR Reunion.

“For this year’s show, we’ve introduced an online, interactive floor plan that lets exhibitors and sponsors see what space and properties are still available, on a real-time basis,” said the CME’s Mike Galipeau. “We encourage anyone who thinks their business could benefit from being part of the show to check out the ‘Exhibitor Info’ page at www.CanadianMotorsportsExpo.com and then contact us at (416) 962-7223 or info@canadianmotorsportsexpo.com.”

Offering interesting and informative forums and seminars, celebrity racer autograph sessions, NASCAR Sprint Cup stock cars, racing vehicles from across the motorsports spectrum, reunion events, awards presentations and equipment suppliers and collectible vendors, the CME has something for every racer and fan. The show is an ideal venue for businesses looking to jumpstart their sales, marketing and promotional campaigns in front of their most motivated customers.

Throughout its existence, the Canadian Motorsports Expo has become known for its presentation of celebrity racers from Canada and around the world. Stars like Ron Fellows, Jacques Villeneuve, Matt Kenseth, Paul Tracy, Brad Keselowski, Dario Franchitti, Max Papis, Derek Daly, Miguel & Yvon Duhamel and many more have graced the CME stage for fan Q&A and autograph sessions.

The CME has also featured world-famous racing machines, including the NASCAR Cup cars of Jimmie Johnson, Dale Earnhardt Jr. and Jeff Gordon, as well as F1 and IndyCar vehicles. Watch for updates to find out which star racers and machines will be appearing at the 6th Annual Canadian Motorsports Expo.

ABOUT THE CME: The Canadian Motorsports Expo Powered by Inside Track Motorsport News is a three-day celebration of Canadian racing that runs February 10, 11 & 12, 2012 at the International Centre (6900 Airport Road in Mississauga, Ontario (Canada)). In addition to booths and racing vehicles representing the entire spectrum of Canadian motorsports, the show is loaded with seminars and forums to entertain and inform racers and fans alike. Celebrity drivers will be at the CME to sign autographs and meet the fans. One of the special themes of this year’s CME is the CASCAR Reunion. Please check the show’s website (www.CanadianMotorsportsExpo.com) for news, updates, schedule information and more.

Tool of the Month: New Snap-on 7850 Series of Cordless Tools