(11 October 2021) – Alton, VIR: Sebastian Priaulx’s performances in the Porsche Carrera Cup races at Virginia International Raceway signalled a turning point in the young Guernseyman’s apprenticeship as he came of age in the heat of some intense racing.

His outstanding drives demonstrated the skills he has been developing in Porsche’s ultra-competitive one-make series and were the manifestation of the effort the 20 year-old has put into his racing season.

Priaulx arrived at VIR leading the championship with a clear goal of widening the gap so that he could head into the final three-race weekend at Road Atlanta with a good safety margin. In Qualifying it was the usual close battle between Seb and his Kelly-Moss Racing team mate, Kay van Berlo, and this time it was the Dutchman who claimed pole for Race 1. Because of the damp conditions the Race 2 pole was ultimately decided by the fastest lap of Race 1.

When the first race of the weekend got underway, van Berlo bolted from pole with Priaulx in hot pursuit. As the race developed, van Berlo was able to pull-out a slight advantage, while Seb suffered with a recalcitrant car, having to defend from a hard charging Riley Dickinson in third. Corner after corner, lap after lap the two 911 GT3 Cup cars ran tightly together. The talented Dickinson pushed hard but Priaulx stayed calm under the intense pressure, defending firmly but fairly, always placing the #15 Multimatic livered Porsche where it needed to be keeping the challenger at bay. He also ultimately set the fastest race lap, thereby securing pole for Race 2.

After the race, Priaulx reported that he had been really struggling for pace at the halfway mark and, although he was pleased with second place, he was going to win on Sunday!

At the start of Race 2, Priaulx was true to his word and immediately went after it, leaving the field in his wake. The drama all happened behind him when van Berlo fell back from the outside pole at the green and then crashed heavily into the Armco at Turn 3 as he fought to defend his position.

When the race went green with 28 minutes left on the clock it was once again Riley Dickinson who set off after the #15 Porsche. He kept the pressure on for a handful of laps but this time couldn’t match Priaulx’s pace and fell back to let Seb take command of the race and set a new lap record on the way to the chequered flag. 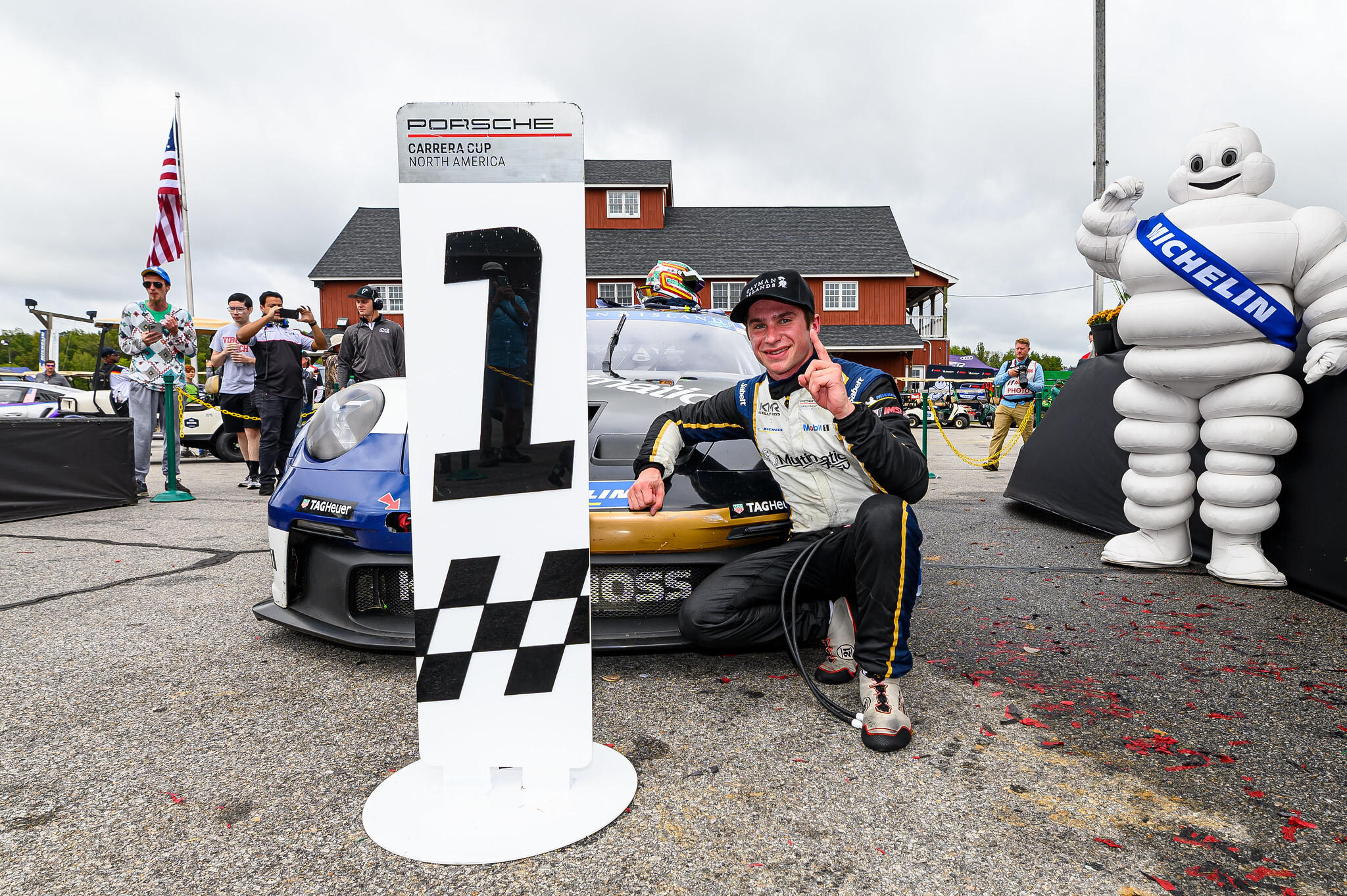 “What a weekend!” said Priaulx. “I gave it all I had in Race 1 and I really enjoyed the battle, although it was pretty tense at times. Riley (Dickinson) piled on the pressure again in Race 2 so I was very happy to get the job done and take the win. I have a very strong lead now but won’t be losing any focus on performance. I’m going to keep training hard in the run up to Road Atlanta to make sure I am physically and mentally prepared for what is going to be a big weekend. I can’t thank Kelly-Moss and Multimatic enough for this opportunity and I hope I can pay them back in the best possible way at Road Atlanta.”

Multimatic Motorsports boss, Larry Holt, said: “Although the win in the second race was a strong drive and a great points haul, it was Seb’s Saturday performance that was most impressive. Riley is a fantastic young talent and was all over the back of our boy for most of the race. It seemed that Seb’s car was struggling for rear grip after half distance but he consistently hit his marks, placed the Porsche exactly where it needed to be at every corner and cleanly kept Riley behind, it was a superb battle from two very talented young racers and fully entertaining to watch. I feel bad for Kay, he was dominant on Saturday but got himself into trouble at the start of Sunday’s race which unfortunately resulted in a heavy crash. I’m glad he’s ok and anticipate some more close racing between the Kelly-Moss teammates in Atlanta.”

The final event on the Porsche Carrera Cup North America calendar, is a three-race showdown at Road Atlanta in five weeks’ time.