Poirier and Chuck Hebing drew front row starting spots for the 25 lap A-Main, and Poirier quickly opened a lead. Poirier had to tiptoe through traffic on a very slick track surface during the second half of the race and his lead over Hebing shrunk from nearly three seconds to less than one. Nick Sheridan and Paulie Colagiovanni caught up to Hebing though, and the three jousted for the second spot for the last seven laps while Poirier drove away.

Colagiovanni moved past Hebing and Sheridan to take second with less than two laps to go, with Sheridan moving into third. Sheridan attempted to dive low under Colagiovanni down the backstretch on the final lap, but the two made contact which resulted in a broken front axle for Sheridan. Poirier took the win – his seventh in eight career Humberstone starts – followed by Colagiovanni, Hebing, Holly Porter, and row five starter Matt Farnham.

Mitch Brown started the race in row six and needed to finish 16th or higher to clinch his first Knights of Thunder title. Brown moved up and eventually finished eighth; Brown officially finished 42 points ahead of Cory Turner in the final championship standings, earning $5,000 for the title along with a Pinty’s VIP package for the 2023 Bristol Dirt Race and the coveted Knights of Thunder helm. 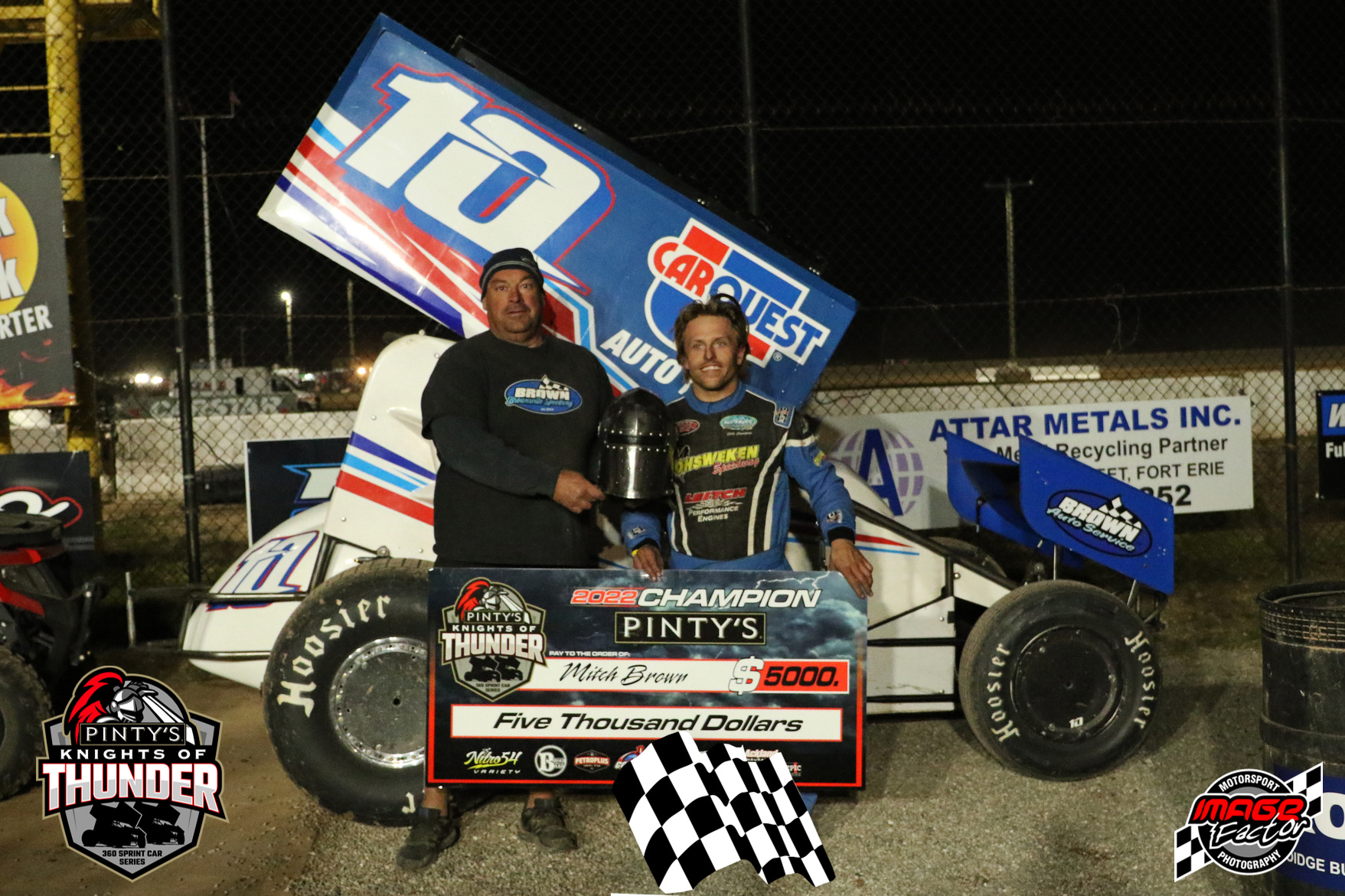 Series officials wish to sincerely thank all drivers, teams, officials, track operators, sponsors, and fans for their support of the 2022 Pinty’s Knights of Thunder season. A total of 50 drivers participated in at least one Pinty’s Knights of Thunder event in 2022, with six drivers – Paulie Colagiovanni (3), Ryan Turner (2), Jordan Poirier (2), Mitch Brown (1), Dale Gosselin (1), and Jordan Thomas (1) – claiming at least one victor’s sword.

Make sure to visit the official website and social media pages of the Pinty’s Knights of Thunder 360 Sprint Car series for news and updates on the 2023 season!

About the Pinty’s Knights of Thunder Sprint Car Series: Founded in 2021, the Knights of Thunder series is a traveling winged 360 Sprint Car tour based in Ontario, Canada. Each points-paying event on the 2022 schedule will pay a minimum of $2,000-to-win and $250-to-start, and all events will be broadcast live on GForceTV. The championship winner will be rewarded with $5,000 and a Pinty’s VIP package for the 2023 Bristol Dirt Race, while 10th place in the championship standings will pay $1,000. The 2022 Knights of Thunder Sprint Car Series is made possible with the support of Pinty’s Delicious Foods, Corr/Pak Merchandising, Stoneridge Specialty Insurance, Hoosier Tire Canada, Burger Barn, Nitro 54 Variety, Strickland’s Brantford Chevrolet, and EPIC Racewear. Visit www.knightsofthunder.com for more information.