by Wally Nesbitt
in Press Releases
0

@Pintysfoods • @Merrittville • THOROLD, ON – Hot on the heels of its sponsorship of the successful Pinty’s All-Star Curling Skins Game, in Banff, Alberta, the company is turning its attention to one of its new summertime properties. For 2015, Merrittville Speedway’s 358 Modified division will have title sponsorship from Pinty’s Delicious Foods.

“It’s wonderful to have a sponsor like Pinty’s join us … they are so engaged and committed to growing the sport (racing),” said (Merrittville GM) Erica Bicknell-Jones. “For several years, Pinty’s have been avid supporters of the NASCAR Canadian Tire Series. And in 2015, race fans will see them every Saturday night as the new division sponsor of our 358 Modified Division.”

Former champion Chad Brachmann of Sanborn NY kicked off the 2014 Championship Chase with a win for his new race team in what would be his only win of the season – settling for the runner-up spot behind first time champion and three time winner Mat Williamson of St. Catharines. Eight other drivers visited victory lane throughout the season; a roster that did not include 23-time champ Pete Bicknell. 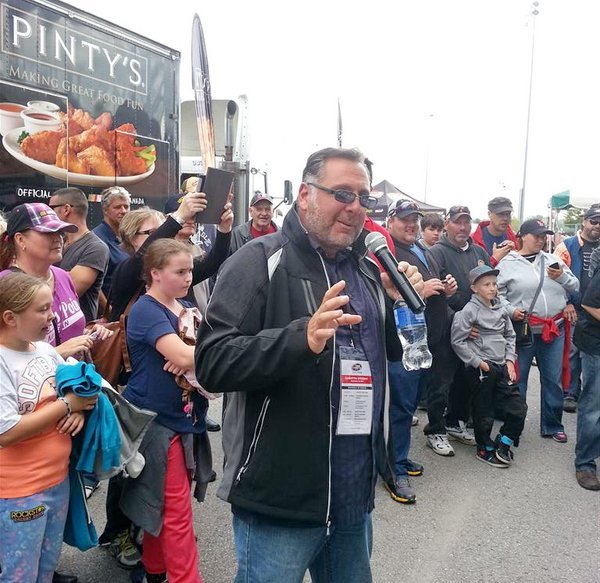 ABOVE: TONY SPITERI, VP OF MARKETING FOR PINTY’S, AT A ‘WING EATING CONTEST’ AT THE NASCAR FINALE, LAST FALL AT KAWARTHA SPEEDWAY. FOR 2015, PINTY’S IS SPONSORING THE 358 CLASS AT MERRITTVILLE SPEEDWAY (PHOTO BY GREG MACPHERSON).

“We are looking forward to celebrating the stars of Merrittville and broadening our support of racing,” said Anthony Spiteri, Vice President of Marketing, Pinty’s Delicious Foods. “Dirt track racing and Pinty’s are the perfect partners. Merrittville is in the business of entertainment and Pinty’s is in the business of ‘eatertainment.’ We are fans, too, and can’t wait for the new season to take to the track.”