Anthony Spiteri (black shirt) of Pinty's Delicious Foods is set to announce that Pinty's will be the new title sponsor of Canada's NASCAR series. The NASCAR Pinty's Cup takes to the track in 2016.

@PintysFoods • #NASCAR • #NPS • On Monday, in Toronto, officials from NASCAR, NASCAR Canada and Pinty’s Delicious Foods will announce that Canada’s national stock car series has a new title sponsor. Starting with the 2016 racing season, the NASCAR Pinty’s Series is the new name of what was formerly known as the NASCAR Canadian Tire Series (NCATS).

Pinty’s has been a long-time sponsor of NASCAR in Canada. The company has put its name on races, been part of the at-track displays and has run ads on TSN’s Sprint Cup broadcasts. The announcement ends speculation about whether or not the series would have a new title partner for 2016 in the wake of the announcement by Canadian Tire, in February, that it would end its association with the tour it helped to found, in 2006. 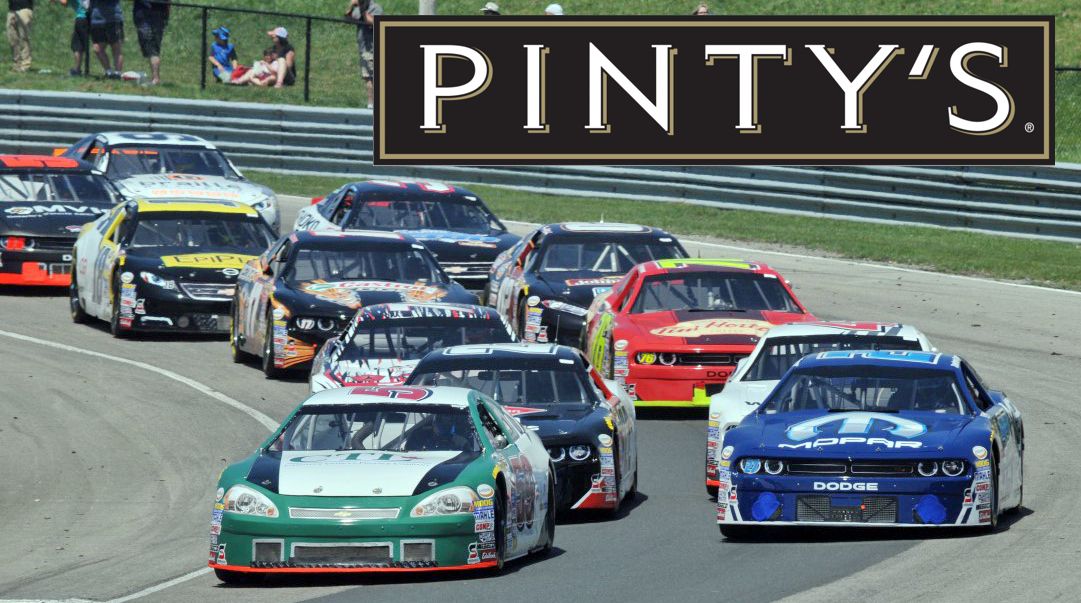 Anthony Spiteri, the VP Marketing / Research and Development for Burlington, ON-based Pinty’s Delicious Foods, said that the title sponsorship is a six-year deal.

An avid NASCAR fan, Spiteri is looking to reinvigorate the series, which is entering its tenth year of existence. He plans to do this by working actively with NASCAR, NASCAR Canada, the media, the teams and the tracks to promote the series and all involved.

Rather than be just another one of the dozens of companies with logos on the boards in NHL hockey rinks, Pinty’s and Spiteri have taken another route to raise the profile of their company in a relatively short period of time.

In addition to NASCAR sponsorships, Pinty’s has associated its brands with the CFL and NFL, Canadian tennis star Eugenie Bouchard, several top Canadian curlers and events, among others. It’s a strategy that has allowed Pinty’s to be a large ‘fish’ in many relatively smaller Canadian sporting ‘ponds.’

In an exclusive interview with Inside Track, Spiteri outlined the agreement and his plans to promote the series and Pinty’s through Canadian motorsports.

“It’s a multi-year deal,” said Spiteri. “At this point, it’s setup for six, plus there’s room for additional years beyond that. It’s all been negotiated up front but the minimum it will be is a six-year deal.”

Even before Pinty’s came onto the scene, Spiteri was involved in CASCAR and the early days of the former Canadian Tire Series.

“Back when I was with Thrifty Foods, we were doing some work with CASCAR. And that transitioned over to NASCAR Canada when I was with Lilydale. So I’ve been working with them ever since the beginning.”

Spiteri continued, “The target audiences are the same. And I hate to quote the gameshow, but the ‘price is right’ for what we’re looking to accomplish. And truthfully, the fit is very good. A lot of the products we manufacture and sell… you’re going to find at the local racetrack. Or you’re going to find at the pub nearby the racetrack.”Asked why Pinty’s has chosen to take an even bigger role in Canada’s NASCAR series, Spiteri replied, “The target audiences for both Pinty’s and the series are very much aligned. Approximately one-quarter of Canadian households say that they’re NASCAR fans. Of course, Canada is hockey crazy but the ability to work within hockey in a meaningful way is very, very difficult in Canada. Compare that to motorsports and it’s something that companies our size can do very well.”

The bottom line, according to Spiteri, is that the association with Canadian racing is good for his company’s bottom line.

“Our most loyal customers tell us all the time to ‘be authentic.’ Whether it’s what we use for food and ingredients and who we associate with… ‘be authentic.’ So partnering up with Eugenie Bouchard or Team Homan, the Grand Slam of Curling… it makes all kind of sense. Our consumers tell us they appreciate these associations and that’s what our R.O.I. (return on investment) tells us, too.

In terms of what Canadian racing fans will see in the new Pinty’s era of NASCAR, Spiteri noted that he’s put things in place to make a big push, right out of the gates.

“From the get-go, we’re integrated with two of the best media partners in Canadian motorsports. One being Bell Globe Media / TSN and the other one being Inside Track Motorsport News. Before we even acknowledged the deal with NASCAR, we had deals in place with both of those partners. So, we plan to invest in the series and promoting our association with the series.”

The fans will also notice some new initiatives at the track.

“From a product perspective, we plan to be very active anywhere the series is running. We plan to work with promoters to bring those food products right to the track. So, we’re going to be putting our money where our mouths are, in that sense.”

And beyond just the NASCAR Pinty’s Series, other levels of the sport will also continue to receive support from the company, according to Spiteri. “We’re also very engaged with the grassroots of the sport, beyond NASCAR, at places like Merrittville Speedway and Humberstone. And I think you’ll see us do a bit more of things like that, to extend our reach within that target audience through Canadian motorsports. Our hope and desire is that they reciprocate to what we’re doing, by purchasing and enjoying our products.”

As a prominent sponsor for many years, Pinty’s has constantly been approached by racers and teams looking to get the company involved in their individual programs. Spiteri has resisted this, opting to ‘raise all of the boats’ by boosting the series.

Recognizing that the teams need to be healthy for the series to thrive, part of his plan is to assist them in other ways.

“We’re also keenly aware of the teams’ needs, just like we are with curling,” Spiteri continued. “We want to help the teams to be able to promote themselves at a significantly higher level that opens them up to a whole other realm of sponsorships. For us, ‘level one’ is to promote the series like crazy so that those teams can actually sell a better value platform to existing and new sponsors. The best things we can do for the sport – and we’re ripping a page out of our success in curling – is be authentic, invest in the series, and help and coach the individual teams to bring new sponsors into the business model.”

You’re not going to see a whole lot of improvement in ‘year one’ because it’s an investment year. But you are going to start seeing things in years two, three and four.”

As part of Pinty’s regular business dealings, they have relationships with many retailers and companies. Spiteri hopes to introduce many of them to the sport and will encourage them to get involved, as well.

He sees the end of the Canadian Tire era as an opportunity to welcome more automotive-related businesses to get involved, where they wouldn’t before.

“There are so many complimentary organizations that we’d love to partner with. We’ll definitely be looking to get others exposed to the sport and hopefully involved,” said Spiteri.

“Canadian Tire was great and formative for the series, but their sponsorship really hog-tied NASCAR from growing beyond where it was in Canada. A lot of the manufacturers wouldn’t play ball with the series because it competed with Canadian Tire on parts and service. Of course, we want to protect our exclusivity, but that exclusivity isn’t within that space.

Therefore, we’d love to partner with an automotive manufacturer on things like consumer giveaways and other promotions to boost the series. In addition to being a shareholder at Pinty’s, I’m also a racing fan and I think deal will allow NASCAR to really expand its reach in terms of Canadian sponsorships, and the teams as well.”

So as he heads into the press conference announcing the new NASCAR Pinty’s Series, Spiteri is pumped up about the future. “What else can I say? The company’s behind it and we’re excited about it. And we’re going to have a lot of fun with it. I’m looking forward to get together with our partners and to do things together so that we make ‘one and one… equal five.’”