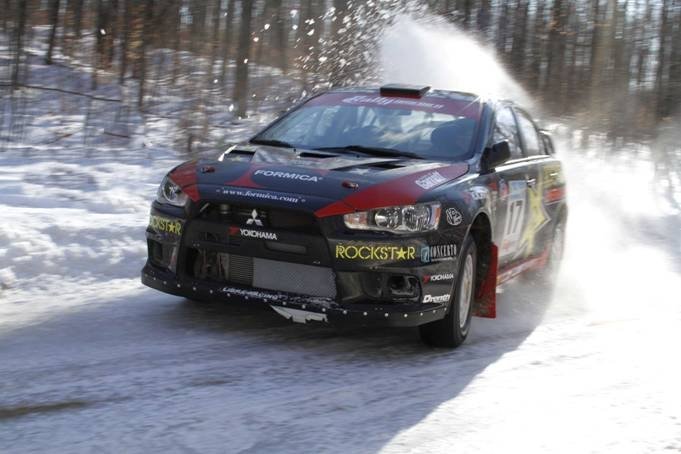 Atlanta (Michigan), January 30, 2012.- Reigning Canadian and North American champions, Quebec driver Antoine L’Estage (of St-Jean-sur-Richelieu) and co-driver Nathalie Richard (of Halifax, Nova Scotia) kicked off the 2012 season this past weekend with a solid performance, finishing in second place at Michigan’s SnoDrift Rally, Round 1 of the Rally America series.  At the wheel of their brand new Mitsubishi Lancer Evolution X, the Rockstar Energy Drink duo earned valuable championship points in the United States and are ready for the start of the Canadian Rally Championship this coming weekend.

We may not have won but the outcome of this first rally in 2012 is still pretty positive.  On one hand, the new car had no mechanical issues and doesn’t have a scratch on it and on the other hand, we earned second place points in what are promising to be hotly contested championships (North American and Rally America) » confides Antoine L’Estage, who adds : «the 2012 edition of the SnoDrift Rally was without a doubt the toughest driving conditions I’ve ever been faced with.  The icy roads were comparable to an extremely smooth ice rink and it was practically impossible to find any grip. The first loop of stages was especially tough for me before I was able to better adapt to the new car on ice.  I also made a mistake by cutting a corner where I shouldn’t have, resulting in a flat tire and another big loss of time » adds the Rockstar Energy Drink driver.

After having conceded a big gap during the first day, L’Estage and Richard essentially tied the eventual winners on the second day, finishing the competition in second place. « Congrats to our British rivals David Higgins and Craig Drew – they had an excellent weekend » adds Antoine L’Estage, who concludes : « thanks to Nathalie for another perfect co-driving job, to my entire Rockstar team, and to our sponsors, which now also includes Formica for the 2012 season.

On the heel of their return from Michigan, the members of the Rockstar Energy Drink team will be faced with another winter challenge this weekend as they contest the Rallye Perce-Neige, in Maniwaki, Québec. This event will be the first round of the Canadian Rally Championship. «We’re looking forward to a nice winter rally, with nice winter conditions! » exclaims Antoine L’Estage. « The roads in and around Maniwaki are hopefully covered in snow and the route that we follow for the Rallye Perce-Neige is fantastic. We’re eager to cross the start line on Saturday morning to kick-off the defence of our 2011 titles » chimes in Nathalie Richard.

The Rockstar Energy Drink team will again be using the Yokohama line of tires for 2012 – this weekend it will consist of A034s for the snow and IG20s for icy conditions. Tires are a key element when we’re aiming for the victory at this rally » explains the Quebec driver, who has already won this event four times making him one of three drivers in the history of the Rallye Perce-Neige with such a successful record since it’s inception almost half a century ago. The start of the 47th edition of the Rallye Perce-Neige will take place on Saturday morning at 9am in Maniwaki. The finish is scheduled for approximately 10:30pm after the teams have covered more than 500 km.