With his father Howie Jr. preparing his car, Matthew Scannell scored three Top 10 finishes in eight race starts. His record could have been even more impressive had he not been a victim of contact in both events at Canadian Tire Motorsport Park.

Team owners Jim and Dan Bray had decided early in the year to run 17 year-old Matthew for the Rookie of the Year honours, but his father, fearing that Matthew did not have the necessary experience in the country’s premiere stock car series, took some convincing. Finally consenting, the Bray Autosport effort was rewarded as Matthew’s 12th place result in the yearend standings secured him the NASCAR Rookie crown. 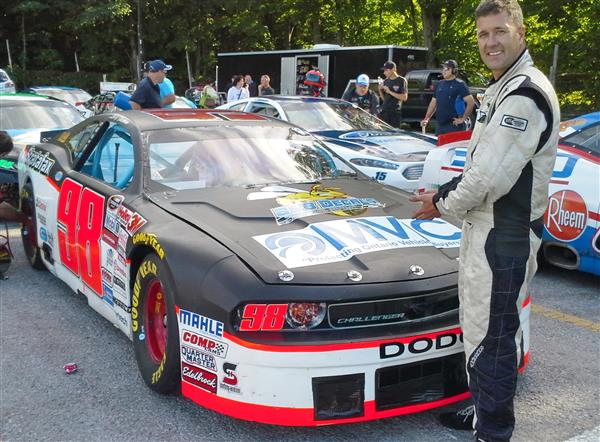 While Matthew was attending summer school, Jackson (above) took the Bray Autosport ride for the two western races, and then completed the season with a trio of Ontario events. A strong showing in the Labour Day race at CTMP earned Jackson and crew chief Ron Easton an award as the second highest placed MOPAR-powered car, setting a positive tone for the remaining contests at Barrie and Kawartha Speedways.

In the season finale, Jackson was forced to pit from the lead following contact, losing two laps. On his return to the track, Jackson held his position, but was unable to gain ground on the frontrunners.

States Jim Bray, “None of this could have been possible without the great financial help from OMVIC, Stratafax Ltd., AMVIC, Aielli’s and supplies from Castrol, Lou’s Meats, K&B Auto, Strodes and most importantly, B&B Decals who have been with us since our CASCAR days and having been wrapping the cars for the past two seasons. And special thanks to our volunteer crew who worked hard, and were there when we needed them.”

With files from Bray Autosport