Featuring the season finales for the Qwick Wick, APC and NASCAR Pinty's Series at Delaware Speedway

Delaware Speedway was the place to be this past weekend. CREDIT: ITMN

NASCAR PINTY’S SERIES: GRAND SLAM HOME RUN!!! Delaware Speedway knocked it out of the park this past weekend!! Starting with the big concert Thursday night, the park was FULL all weekend. Pinty’s must be ecstatic with the exposure they received – signs on the pit wall facing the huge crowds, flags, announcer mentions and great recognition for a company that ‘supports the sport’!!

Friday night, in the Canadian Tire 125, D.J. Kennington saw Treyton Lapcevich slide up half a lane going into 3 on the last lap and, in a traditional LONG TIME Delaware move, he ‘filled the hole’ without spinning Treyton and won the race.

Lapcevich was book-ended, in second, by two former series champions, DJ in first and Andrew Ranger in third; a great showing for an up and coming rookie with a great future.

The Qwick Wick Super Stocks wrapped up their season on Friday night at Delaware. Lane Zardo won the race and took the title three points ahead of hometrack favourite Trevor Collver. Former CASCAR racer Pete Vanderwyst finished second in the race and third in the points. 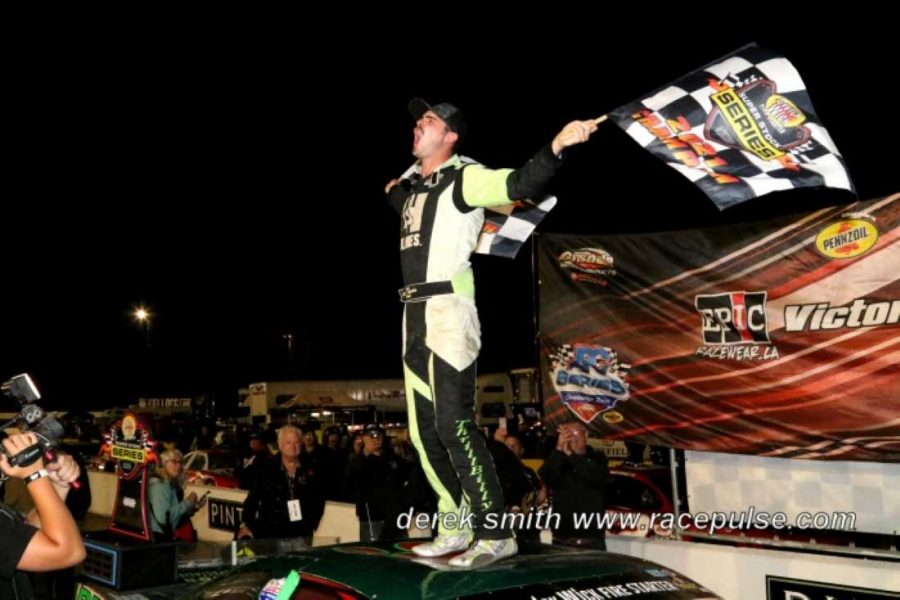 On Saturday, the fast-growing APC United Late Model Series ran as part of their Qwick Wick Fire Starter Championship Weekend. These cars, reminiscent of the old Late Models, put on a great show.

2021 Canadian Motorsport Hall of Fame inductee Bill Zardo gave the command to start the engines for their race. His grandson Lane had won the previous night in one of the support races.

Treyton Lapcevich pretty much dominated the 100 lapper finishing ahead of Andrew Gresel with Shae Gemmell in third. Brandon Watson posted a solid finish to take his second career APC Championship by a single point over Lapcevich!

The support races were ‘interesting’!! The OSCAAR Hot Rod class had some very cool and fun cars – a Studebaker Hawk, an El Camino, a ‘58 Impala two-door hardtop and lots of old cars.

Former CASCAR runner Jesse Kennedy came through the pack in his Chevelle, and with two to go, the white flag came out for him … but instantly got pulled back in which probably meant the rest of the field didn’t see it!!

Jesse lifted at the end of the next lap but the rest of the field didn’t with Steve Book getting the checker in his ‘Bookmobile’!!

As Jesse told me later, he was not running for the points and each entrant gets $200 so he wasn’t, in typical Jesse fashion, upset. More entertainment!! LOL

Andy Kamrath was on rails and won the OSCAAR Modified feature at Delaware. 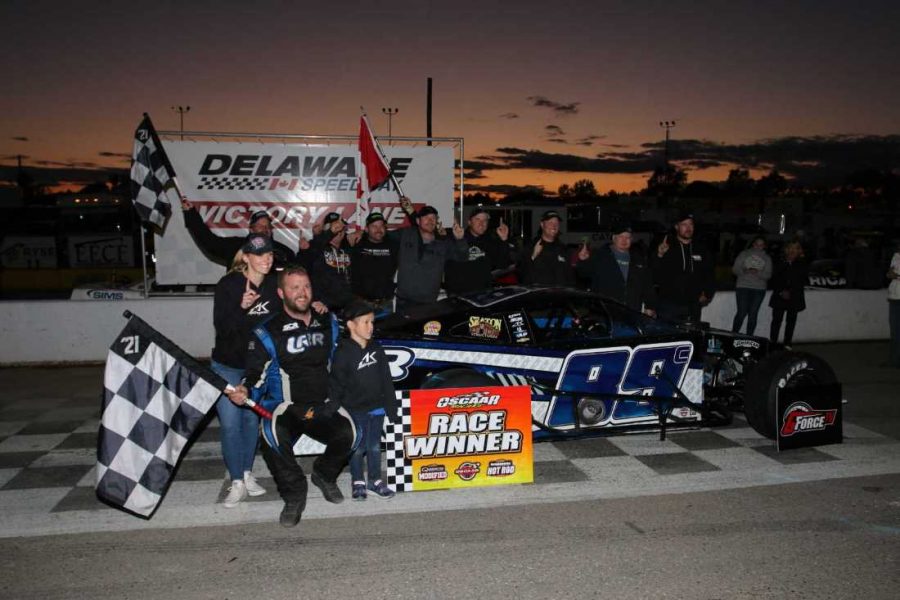 On Sunday, a double-header for the Pinty’s Series definitely gave the capacity crowd a real show. DJ Kennington got his second win of the weekend in the Qwick Wick 125 beating Brandon Watson – making his second Pinty’s Series appearance – as he was filling for Mark Dilley. Andrew Ranger was third, again. 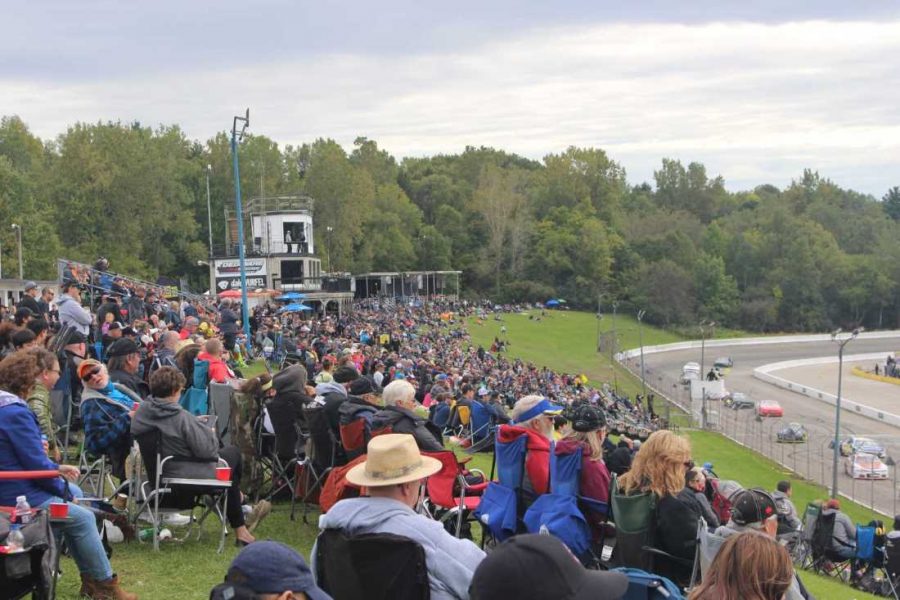 J.R. Fitzpatrick had filled in driving the #64 on Friday at Delaware.

But back to Sunday, there was an ‘incident’ during the race where the WWE appeared to show up on pit row after a ‘close encounter of the worst kind’ between the #8 car of Shae Gemmell and the #22 car of Marc-Antoine Camirand.

The crew of the #8 car thought that the windshield of the 22 car needed some ‘adjustments’ via a couple of aluminium jack stands on pit road!! I’m sure invitations were sent out for a ‘visit to the trailer’!! LOL

Next up, the Pinty’s Fall Brawl definitely lived up to its name!! The starting line-up was determined with a very interesting format – the quickest lap of each car in the just completed Qwick Wick 125 determined the grid.

In all my years in racing, I had never seen that method. Smart! Treyton Lapcevich continued his strong showing by leading early. Unfortunately, two lapped cars got into it in Turn 1 almost completely blocking the track and he spun to miss them.

Per NASCAR rules, he was sent to the back. He worked his way back up near the lead and in a late race restart he tried an inside pass going into 1, and sadly, tagged the pit wall spinning himself out.

Alex Tagliani came into the weekend leading the points. But unfortunately, he had a ‘weekend to forget.’

But all in all, the weekend was a tremendous success that merits repeating in years ahead. Thought starter: Why not put the King of the Hill between the two big races as ‘fill’?

Kudos to Delaware, the NASCAR Pinty’s Series, the APC United Late Model Series and everyone else who was involved! 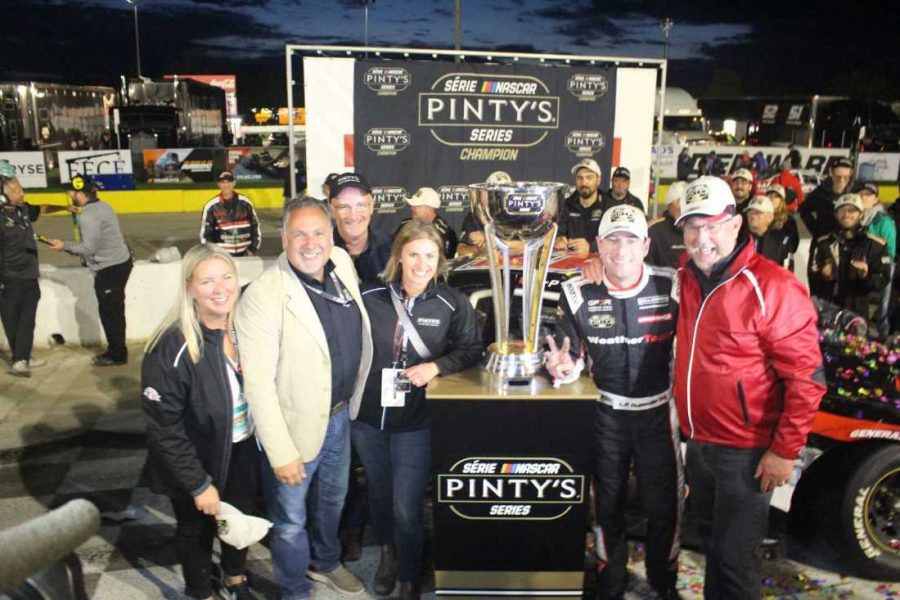 The Canadian Motorsport Hall of Fame announced its 2021 inductees last week and there are 16 VERY deserving individuals heading to the Hall.

I have stories about several of those inductees, starting with this one. I was at the HUGE St. Thomas Nostalgia Nights (1,700 cars!!) a week ago Saturday night when my cell phone rang. I looked at the screen to see a 416 number.

I answered it and heard ‘Dave Mathers, this is Dr. Hugh Scully from the Canadian Motorsport Hall of Fame and I’m pleased to tell you that your nomination for getting Clare Dear into the Hall has been unanimously approved’!!

I stuck my hand out and shook Clare’s hand, who was standing right beside me!! I told Hugh that Clare was with me and handed him the phone. Awesome!! Very well-deserved honour! We still can’t chisel the smile off Clare’s mug!

And, also on that same Saturday night, I got an email from a friend of nearly sixty years, Allan de La Plante, that he too is an inductee this year.

I tried for him a few years ago but didn’t succeed. A little background, Al was the official photographer for the late, great Formula One star Gilles Villeneuve!! And his photos are magnificent. Also very well-deserved.

Now let’s talk about some of the other inductees.

Howie Scannell!! Howie called me at my dealership one day about 30 years ago and told me he wanted to buy a new car for his mother-in-law, a very lovely lady.

We had the one he wanted and got it ready. Howie and his MIL came into my office and he introduced us and we did the paperwork.

As they were leaving to go get into the car, she turned to him and said, and I quote, ‘why thank you Howard for this lovely car’! At the mention of ‘Howard’ Howie looked like a deer caught in the headlights!!! Howard? I suppressed a laugh!!

My favourite memory of Howie is the Castrol-sponsored #99 car launching through the Castrol sign in corner 3 and out of the park at Cayuga about 50 years ago. Then the back gate opened and in rolled Howie and back out onto the track. Awesome!!

‘Big Z’ Bill Zardo. One of the toughest racers to ever hit a stock car track. Thirty years ago, I custom ordered a cube van for Bill and he and I went to Ohio to pick it up and then up to Prototype to get a couple of bad boy Ford engines!!

Bill told me Saturday he still had the truck with 1.2 million miles on it. He laughed and said that the Hall induction only cost him about three million bucks with Junior getting about one million of it. Sounds about right!!

Glenn Styres walked over to our CASCAR at Cayuga in 1996 and asked for some advice on the setup for his Sportsman car. Paul went over and looked at his car and gave him several changes to make.

Glenn came back and wanted to know if we worked on stock cars. Yup. The next week several of his cars showed up at our race car shop and then, the biggie, a 45-footer from Motor State arrived full of goodies, rims, spring, shocks, etc., you name it, there it was.

We were very impressed, to say the least. It wasn’t long before Glenn switched to dirt and built the awesome Ohsweken Speedway dirt track on his property. He definitely did MUCH better on dirt!

Glenn was in the #19 TriCorp car in both of Sunday’s Pinty’s races. I guess it’s fair to say that he didn’t find the ‘cushion’!! LOL

Now let’s all work together to get ‘Speedy’ Jack Monaghan into the Hall. Anybody with Jack’s stats should get them to me and I’ll start getting the ball rolling. I will work hard to get him that well deserved honour.

Denny Hamlin pretty much dominated last night’s race at Vegas leading 137 of the 267 laps of the South Point 400.

Chase Elliott finished almost half a second back in second with Kyle Busch third. Kyle Larson lead 95 laps but ended up tenth. The best part of the race you ask?

Only one actual yellow flag that was for Joey Gase in Corner 2 (the other three were for Competition Yellow and the end of both stages). Larson now leads Hamlin by 14 and Kyle Busch by 22. LOVE the night shows, no fighting with stick and ball sports!! Keep it up! Their next race is Sunday at 2 P.M. in super-fast Talladega!!

ThorSports Racing DOMINATED last Friday night’s Camping World Truck Race at Vegas finishing 1, 2, 3 and 4. Christian Eckes won over Ben Rhodes and Matt Crafton. Todd Gilliland had lead almost half the laps but ended up 5th behind the Thorsports gang. Rhodes leads the points by 6 over John Hunter Nemechek and our own Stewart Friesen (6th). They race Friday night at 9 P.M. in Talladega.

The NHRA had good weather for a change at St. Louis. Steve Torrence continued his Top Fuel domination beating number 1 qualifier Mike Salinas in the final.

He is 36 points in front of Brittany Force in the points. Matt Hagan, who looks like his eyes are about to pop out of his head in interviews LOL, took out Bob Tasca III in Funny Car and leads Ron Capps by 59 points and John Force by 72 in the Countdown to the Championship.

Erica Enders came out of the number 5 spot to beat number 3 qualifier Dallas Glenn in the Pro Stock final. Greg Anderson now leads Enders by only 17 points and Kyle Koretsky by 97.

Their next race is at the beautiful Texas Motorplex just west of Ennis, Texas on October 7 – 10.

IndyCar put on another great show at Long Beach yesterday. Colton Herta led more than half the laps and won the race over Josef Newgarden and Scott Dixon.

Alex Palou won another championship for Chip Ganassi Racing with Newgarden second and Pato O’Ward who, sadly, got knocked out of the race and the overall championship win at the halfway point of the race.

Wow, what a show at Sochi, Russia!! Lando Norris won the pole for McLaren but got beaten by Carlos Sainz into Corner 1.

And it didn’t get much better for him after that. Lewis Hamilton started a low 6th while points leader Max Verstappen started from the parking lot, DFL as a result of a power unit change!! Don’t ask!

The waters literally parted for both drivers and Hamilton won over Max with Sainz third and Norris 7th. Lewis now leads Max by TWO, count ‘em, two points with Bottas third, way back of them. Mercedes leads Red Bull by 33 in the Manufacturers Championship. Their next race is in Turkey on October 10.

IMSA had an interesting race Saturday at Long Beach. Cadillacs finished 1, 2, 3 in the Prototype class with Nasr and Derani taking the win. It was Corvette, Corvette, Porsche in GTLM as Tandy and Milner getting the win in the 4 car.

In GTD it was Lambo, Porsche, Porsche as Sellers and Snow won the class. Their season wraps up in two weeks at the Country Club of Racing, Virginia International Raceway in Alton, Virginia. What other track has an actual barn for their main building? LOL