The Lucas Oil Can-Am Midgets made their annual stop at Sauble Speedway, “The Beach”, for the Canadian Holiday Weekend and Todd Cresswell and Rob Neely took top honors. Races number 10 and 11 in the 2012 schedule contained only one caution flag for the two 25-lap feature events on Saturday and Sunday night. Sunday’s race ran in six minutes, start to finish.

Cresswell took the lead for Sunday’s Lucas Oil Can-Am Midget race from his pole position and never looked back. Twenty-five laps later he was in Victory lane. Thanking series sponsor Lucas Oil, Hoosier Tires and especially his Dad, Cresswell noted he ran with a borrowed motor from Ken Lorenz (TQ74).

Tom Kyle and Corey Moesker fought for second place on lap one followed by Chris Holman and Adrian Stahle. Moesker took the spot as Kyle fell back into the field. Cresswell opened up a good lead turning times in the low 14-second range. Five laps in, Holman ‘powered up’ and took over 2nd place from Moesker. Defending champion and current point’s leader Darren McLennan was now in fourth with Stahle rounding out the top five.

Cresswell held a ten car lead over Holman as they reached the halfway point. McLennan passed Moesker for third as James Gray also followed and took the 4th spot. Moesker was now back in 5th place. Moesker now had a battle with Mack DeMan for the top five spot. On lap 16 DeMan made his move and joined Gray in 4th and McLennan in third as they could of a had a blanket thrown over them as they raced in a tight cluster. With 5 laps to go Cresswell had command of the field as Holman kept ahead of McLennan, Gray and DeMan. Taking the checkered flag, Cresswell took his second win of the season. Asked in Victory Lane why he chose the #3 for his Lucas Oil Can-Am Midget, Cresswell said he was a long time fan of the late Dale Earnhardt and choosing his number was easy. Holman was second, followed by McLennan, Gray and DeMan. Heats were won by McLennan and Rob Neely. 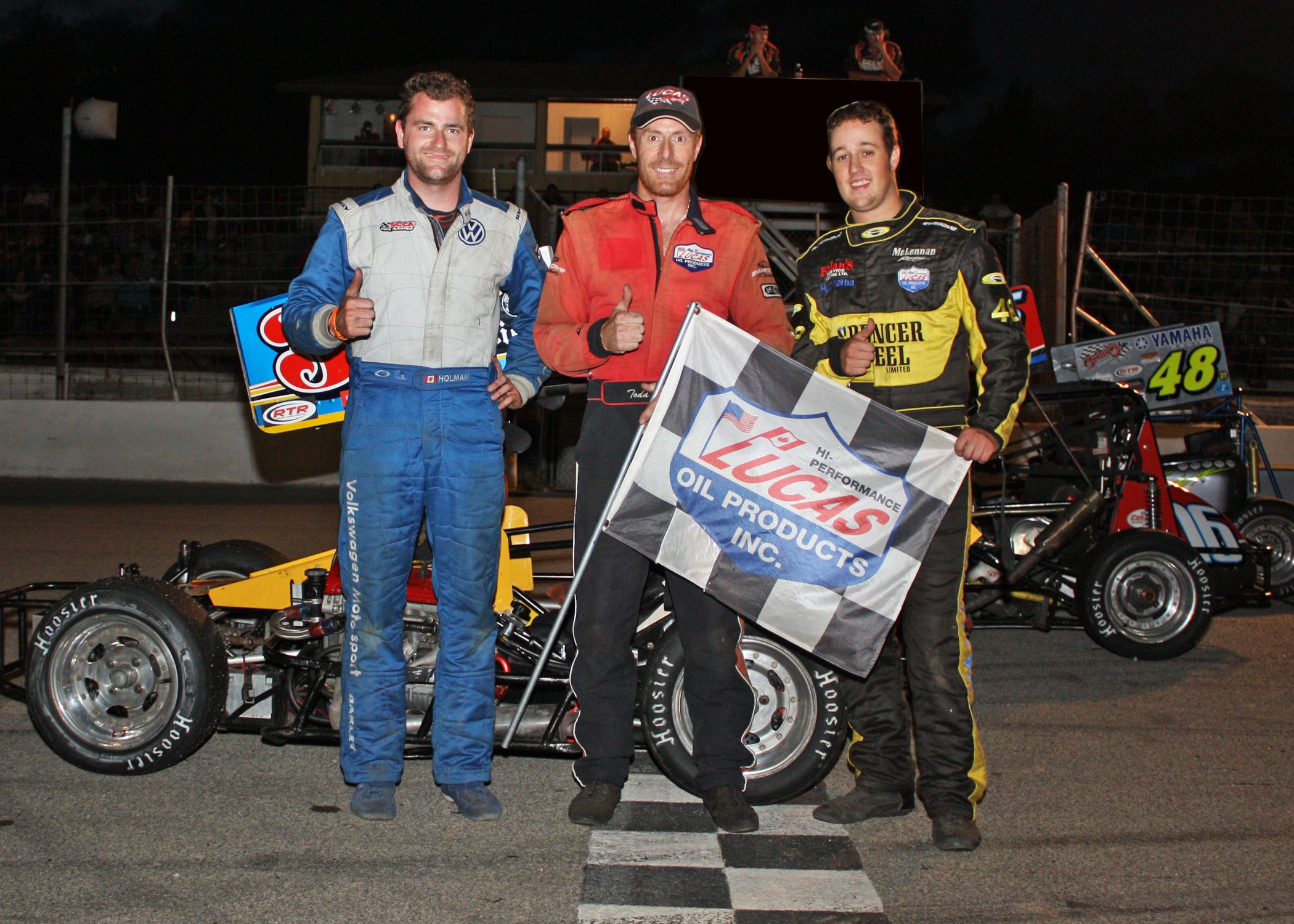 Rob Neely took his first win of the season on Saturday night as the Lucas Oil Can-Am Midgets returned to Sauble Speedway for their 2nd long weekend there. Starting in the 6th spot Neely took the lead from Todd Cresswell on lap 8 and held on for the win moving him up to second place in the point’s series. “Ken Lorenz always sets up a good car for me and tonight it was spot on,” said Neely. “I want to thank the fans for coming out tonight, I always like running at Sauble Speedway. Thanks also goes to Lucas Oil, our series sponsor, and Thomboys of Owen Sound, the sponsor of tonight’s race.”

Todd Cresswell took the field to the green, followed by Rookie Adrian Stahle and Corey Moesker. Neely took over third place by lap 2. Two laps later he passed Stahle and set sites on Cresswell. The first and only caution came out on lap 7 as James Gray and Corey Moesker made contact in turn three taking Moesker out of the race. At the restart Neely took over the lead but Cresswell stayed on his tail. Stahle remained in 3rd followed by Chris Holman and Darren McLennan. Holman began to fade at the halfway point as James Gray moved into the top five. Lap after lap Neely and Cresswell battled, with Neely staying out in front. With five laps to go the lead cars approached some lapped cars and Neely made some quick moves and pulled away from Cresswell. Neely took the win followed by Cresswell, Stahle, McLennan, and Gray. Heats were won by Cresswell and Neely. 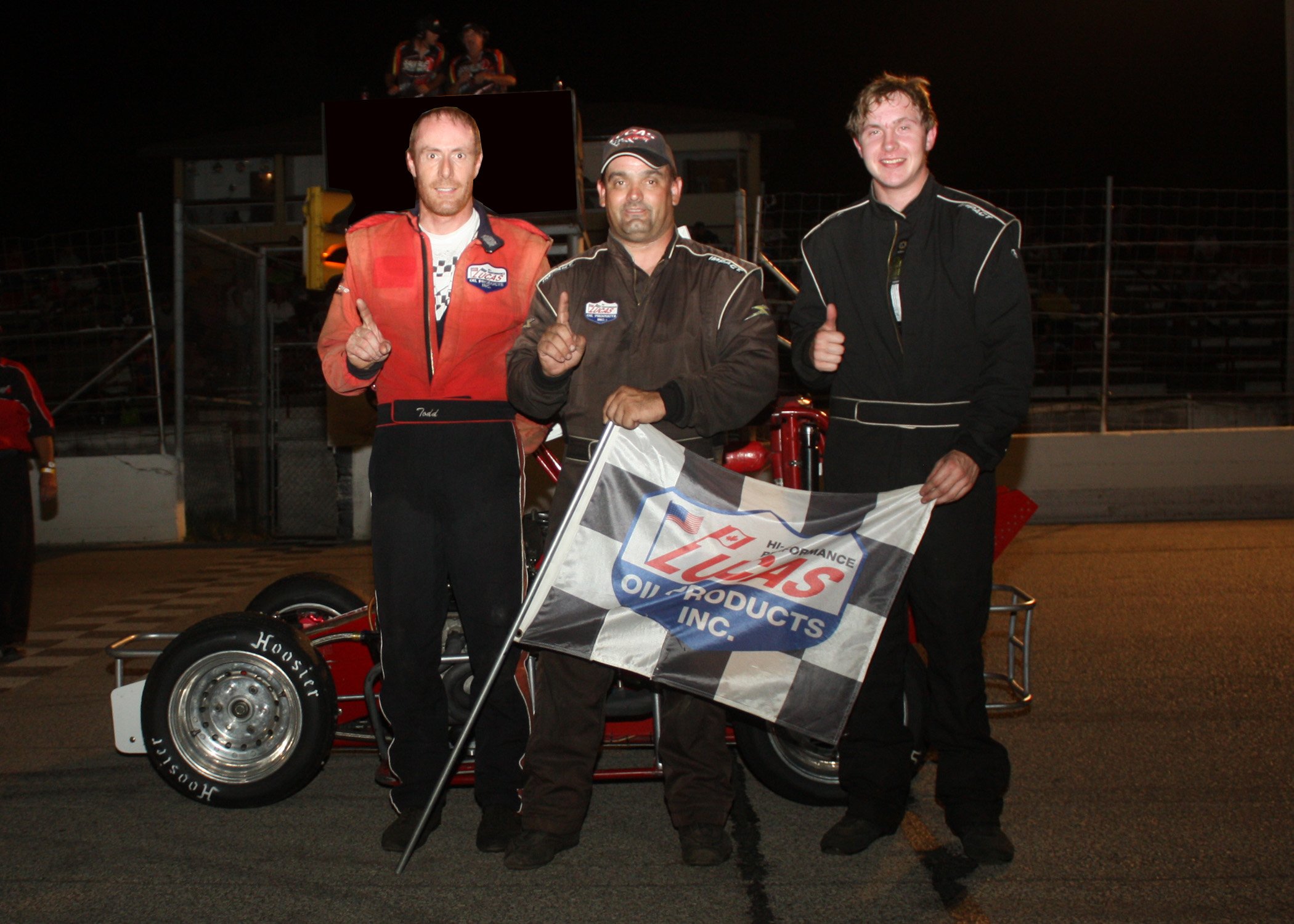 The Lucas Oil Can-Am Midgets will be joined by the Casey’s Midgets from Buffalo on Saturday, August 11, at Sunset Speedway, Stroud, Ont. for their first ever ‘joint venture’ on the Canadian side of the border. Titled as a ‘Hot August Night’, fans will be treated to some very quick open wheel racing.

NASCAR: Dodge to Withdraw from NASCAR at Conclusion of 2012 Season