@JohnsonvilleCA • @Johnsonville • @MARKDILLEY9 • #NCATS • BARRIE, ON – Mark Dilley was behind the wheel of the #02 Johnsonville Ford for a pair of NASCAR Canadian Tire Series races in western Canada last week. The highlight of the trip was his strong performance in the July 15 Velocity Prairie Thunder 250 at Saskatoon’s Auto Clearing Motor Speedway. But the team showed strength in both outings and they’re looking forward to building on those runs this coming Saturday at Montreal’s Autodrome St-Eustache.

In Saskatchewan, the Barrie, Ontario racer posted his best qualifying effort of the season prior to the start of the 250-lap chase around the 1/3-mile, banked oval. Dilley put the #02 Johnsonville / Leland / BDI Ford on the outside of the front row for the initial green flag (below), but was soon forced to fight from the back of the field.

“We qualified on the outside pole in Saskatoon but they [NASCAR] said I jumped the start a bit and we got a ‘drive through’ penalty, which dropped us down to last. You burn up so much of the car coming from so far down. But we didn’t lose a lap, which was a good thing. We managed to pass a lot of cars – coming from 20th – and made it back to fourth at the end. The Johnsonville / Leland / BDI Ford was definitely competitive and in the hunt, which felt great.” 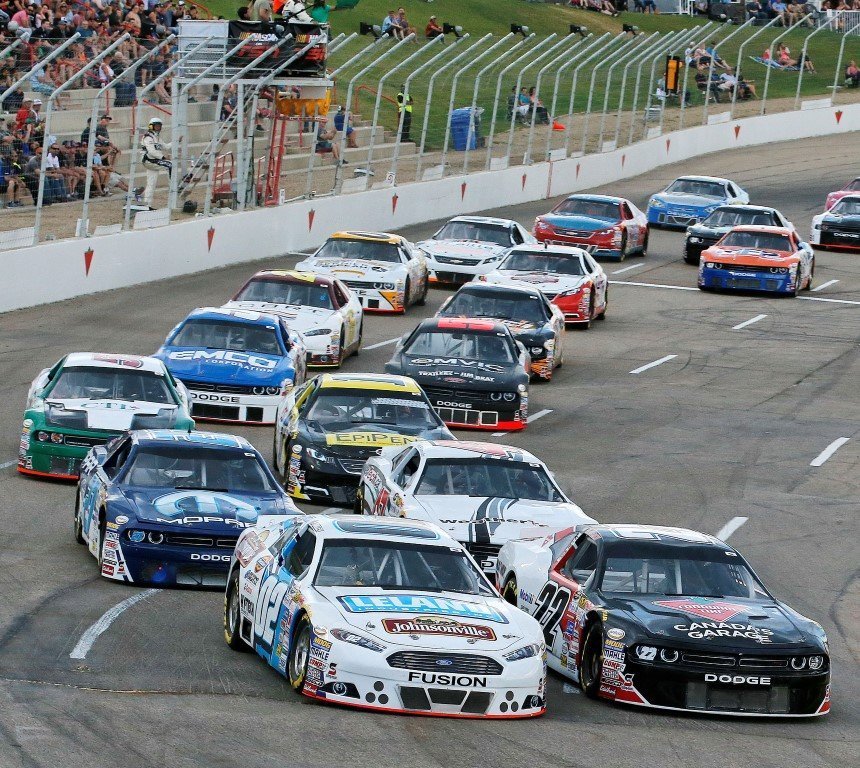 In addition to doing well in the race in Saskatoon, Dilley was also pumped up about being part of an event for one of the team’s main sponsors, Leland Industries. Company founder and President Byron Nelson hails from nearby Wadena, Saskatchewan.

“At the race at Auto Clearing Motor Speedway, Byron entertained about 150 people from his original hometown, Wadena. It’s located two hours east of Saskatoon and it felt like he pretty much brought in the whole town… it was a huge deal and a lot of fun.”

Four days prior, Dilley took part in the Alberta Has Energy 300 at the ¼-mile Edmonton International Raceway, located just south of Alberta’s capital city. Dilley qualified sixth-fastest for that race but suffered a flat tire almost immediately, which dropped him two laps behind the leaders. It was an impossible setback to overcome at the tight bullring. He would eventually bring the Johnsonville Ford home in 14th-place.

“The Edmonton race (main image) was a tough deal,” said Dilley. “We were second-fastest in practice and qualified sixth, which was a bit of a driver error thing. But then we got a flat tire right at the beginning of the race and we lost two laps under green fixing it. The problem was that there weren’t a lot of cautions and there were five other guys a lap down, so there was no way we’d get a ‘Lucky Dog’ to get back on the lead lap.”

Dilley continued, “Losing laps like that on a short track is just the worst place a flat tire can happen. The leaders are already lapping guys and those are the ones who are going to get the ‘Lucky Dog’ laps back, each caution, so we were kind of out of it before it began, in spite of having a good car. Near the end, we pitted a few times to try out some things to get the car better for Saskatoon. It was a tough result. But on the bright side, the car was fast and we made strides in terms of making it better.”

Three-time NASCAR Canadian Tire Series champion Scott Steckly won both races during the tour’s annual swing through western Canada. And with those results, he climbed to the top of the series’ point standings. Following six of 11 events, Steckly has 247 points, putting him just four ahead of Jason Hathaway, who was third and second, respectively, in Edmonton and Saskatoon. Rookie Gary Klutt is tied for third with two-time NCATS champ Andrew Ranger, at 222 points. Reigning champion L.P. Dumoulin rounds out the top five with 221 markers.

UP NEXT: The #02 Johnsonville / Leland / BDI Ford returns to action on Saturday, July 25 at Autodrome St-Eustache. The flat, 4/10-mile oval will host the seventh of 11 races on the 2015 NCATS schedule. The track’s unique layout always produces an interesting race.

Coming off his fourth place run in Saskatoon, Dilley is feeling good about the #02 Johnsonville oval car. “I’ve raced at St-Eustache for years. It’s flat and we’ve always run decent there. Hopefully, we can build on the momentum we started out west and continue to progress. For us, it’s about ‘wins’ and not about the points. We’re excited about the last three oval races because we’ve done well at all of them over the years, and we’re looking forward to Kerry [Micks] having a good car and doing well at the two road courses.”

ABOUT JOHNSONVILLE SAUSAGE: Founded in 1945 by Ralph F. and Alice Stayer, Johnsonville is the most popular brand of sausage in the United States, and is available in 30 other countries, including Canada. The company’s headquarters are in Sheboygan Falls, Wisconsin. Their award-winning product lines include Brats, Italian, Smoked, Breakfast, and Snack sausages. More information about Johnsonville products and recipes featuring the products can be found at www.johnsonville.com.

ABOUT MICKS MOTORSPORTS: Based in Mt. Albert, Ontario, Micks Motorsports is one of the longest-running and most successful stock car teams in Canadian motorsports. The team’s drivers are Kerry Micks and Mark Dilley, both of whom have competed in the NASCAR Canadian Tire Series since the series’ founding in 2007. Micks and Dilley each have multiple NCATS race wins to their credit and were also CASCAR Super Series champions prior to NASCAR coming to Canada. In 2015, the team will contest the entire 11-race NCATS schedule, with Micks piloting the #02 Johnsonville Ford on the road courses and Dilley taking charge for the oval track events.

ABOUT THE NASCAR CANADIAN TIRE SERIES: Created in 2007, the NASCAR Canadian Tire Series is the only professional stock car racing series in Canada. Competing from Alberta to Nova Scotia, in 2015 the series will make 11 appearances at ten different venues, with the schedule made up of seven oval track races and four road course events. Past series champions include Scott Steckly, DJ Kennington, Andrew Ranger and LP Dumoulin. For schedules, race updates, results and standings, visit the website, www.nascarhometracks.com, and click on the Canadian Tire Series link.

By Inside Track Communications • Photos by Perry Nelson

The Roar Before the Rolex 24 At DAYTONA Presented By INX Set To Showcase 61 Entries This Weekend, Jan. 21-23

Brandon Watson Prepared To Push On Despite Peterborough Disappointment