Current OSCAAR Super Late Model point leader Brandon Watson has announced he will make his NASCAR K&N East Series debut on September 21st at New Hampshire Motor Speedway. Watson last appeared at NHMS at the 2009 ‘ACT Invitational’, logging a head-turning 3rd place performance after leading much of the race’s early stages. The Stayner, ON driver will campaign a car normally piloted by Vermont driver Steven Legendre, prepared out of Dave Blaney’s North Carolina shop. Watson’s family-run operation will test with the car at Motor Mile Speedway in Fairlawn, VA next week in preparation for September 21st’s ‘North American Power 100’. The team will be holding a fundraiser for their trip on September 13th at the Shrine Hall in Barrie, all are welcomed to attend. Despite the excitement of readying for his first career K&N East Series start, Brandon will be back in action with the OSCAAR Super Late Model tour this Saturday (September 7th) at Flamboro Speedway. 2013 Sauble Speedway Ltd. Late Model champion Scott McTeer (above, by TW Robarts Photography) has announced he will compete at Sunset Speedway’s Velocity 250 weekend on September 28th & 29th. The Tiverton, ON driver has acquired the same engine that Dwayne Baker utilized to win the 2012 Autumn Colours Classic, and is confident that switching to a crate engine from his traditional built power-plant will give him the advantage he’s been missing at Sunset. McTeer has won at Sunset in Super Stock competition, but will enter the Velocity weekend in search of his first career LLM triumph at the Innisfil, ON 1/3 mile. The Sauble titlist will compete alongside a who’s-who of Ltd. Late Model royalty, including Sunset championship contenders Mike ‘Lights Out’ Bentley and Stompin’ Tom Walters, 7-time Sunset champion ‘Mr. Excitement’ Chris Morrow and 2012 Autumn Colours Classic champion Dwayne Baker. Fan favourite OSCAAR Modified Tour contender ‘The New Hamburg Nightmare’ Matt Barton (above, by Thompson Photography) has confirmed he will be back with the tour at Flamboro Speedway this Saturday (September 7th). The sophomore driver has competed part-time with the upstart organization this season, suffering a multitude of mechanical problems along the way. Barton will return to Flamboro for the first time in 6 seasons, after winning a Hurricane Midgets event at the speedway in 2007. The MDB Racecars house driver will compete alongside reigning champion Gary McLean, multi-time winner Brent McLean, popular sophomore Davey Terry and the rest of the tour regulars, as he continues to search for his first career tour victory.

Here’s our interview with Barrie Speedway Mini Stock regular Mike Gettliffe (above, by Thompson Photography). The Orillia, ON driver is in the midst of competing for his first career championship, and is locked in a back and forth points battle with division veteran Doug Butler that is likely to come down to the final race of the final night of competition. Gettliffe tells us about his move to Mini Stock after a career in the Thunder Car ranks, the level of competition in the Mini Stock division and what prompted him to jump back into competition after a 9-year hiatus. The video can be found here.

Lucas Oil TQ Can-Am Midget championship contender Mack Deman has announced via his Facebook page that he will be competing at New York’s Holland International Speedway this Saturday (September 7th). Deman will compete in a TQ Midget sans wing, in a NYPA Midget Association sanctioned event. The race is slated on the undercard of Holland’s Pro Modified Budweiser 100. Details can be found at www.HollandSpeedway.com 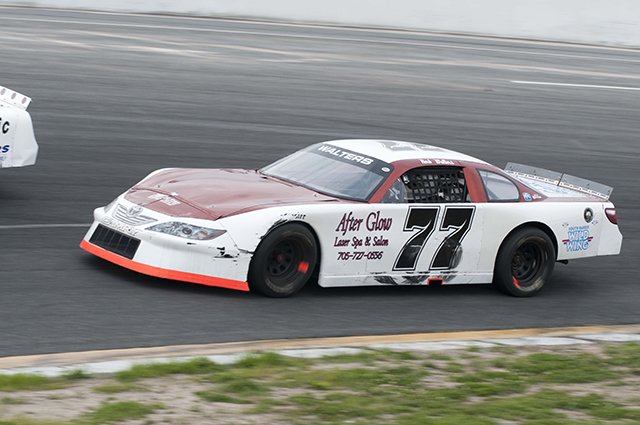 We recently caught up with 2013 Sunset Speedway Ltd. Late Model rookie competitor Herb Walters (above, by Pamela Guppy). The former Super Stock titlist offered up a candid interview about his Rookie of the Year aspirations, the lessons he’s learned in his move to the speedway’s premiere division and the elite level of talent within Sunset’s ranks. Follow ‘The Cheque Casher’ on Twitter @HerbWalters77 and click here for the video interview.