Milverton, ON, CANADA – (August 30, 2021) – 22 Racing’s trio of extremely motivated drivers rolled into Circuit ICAR with high expectations for the first return to this circuit since 2017.

Alex Tagliani secured the Championship points lead with a fourth place finish, Marc-Antoine Camirand experienced a mechanical issue in the final laps of the race after running third while Treyten Lapcevich also experienced mid-race issues then returned to the wet track to gain seat-time and points.

Saturday’s schedule got underway with practice under grey skies at Circuit ICAR seeing Camirand fourth fastest of the session followed by Tagliani in fifth and Lapcevich seventh fastest of the very competitive field.

Light on and off again drizzle led up to the official NASCAR Pinty’s Series Qualifying session that saw Tagliani secure third on the grid for the La Fernandière 75, followed by Camirand in fourth and would see Lapcevich starting from seventh.

Prior to the field heading out to get the day’s race underway the rain began to fall more steadily adding tire choice as another variable that would come into play.

Tagliani, driver of the No 18 Rona/ Viagra / St Hubert Chevrolet Camaro wasted little time to claim second spot and on lap 17 Camirand quickly grabbed third while Lapcevich’s No 20 RGC / Qwick Wick machine began to smoke forcing him into the pits for diagnosis and repairs. With the issue resolved Lapcevich returned to the track 12 laps down.

With the rain now falling more intensely all the teams pitted on lap 37 to switch to the General Tire rain tires and to make quick adjustments.

At the halfway point of the race Tagliani, closely followed by the No. 22 GM Paille Chevrolet Camaro of Camirand attempted to maximize their positions heading into the fist corner on the restart in the rain. On lap 39 Tagliani connected with another car and spun dropping him back outside of the top-ten presenting an opportunity for Camirand to challenge for second.

Consistently hitting his marks lap after lap Camirand was poised to secure a podium finish however with only three laps to go the No 22 GM Paille machine began to slow triggering a full course yellow. It was later determined that a part in the rear end of Camirand’s car broke prematurely ending his otherwise admirable effort. 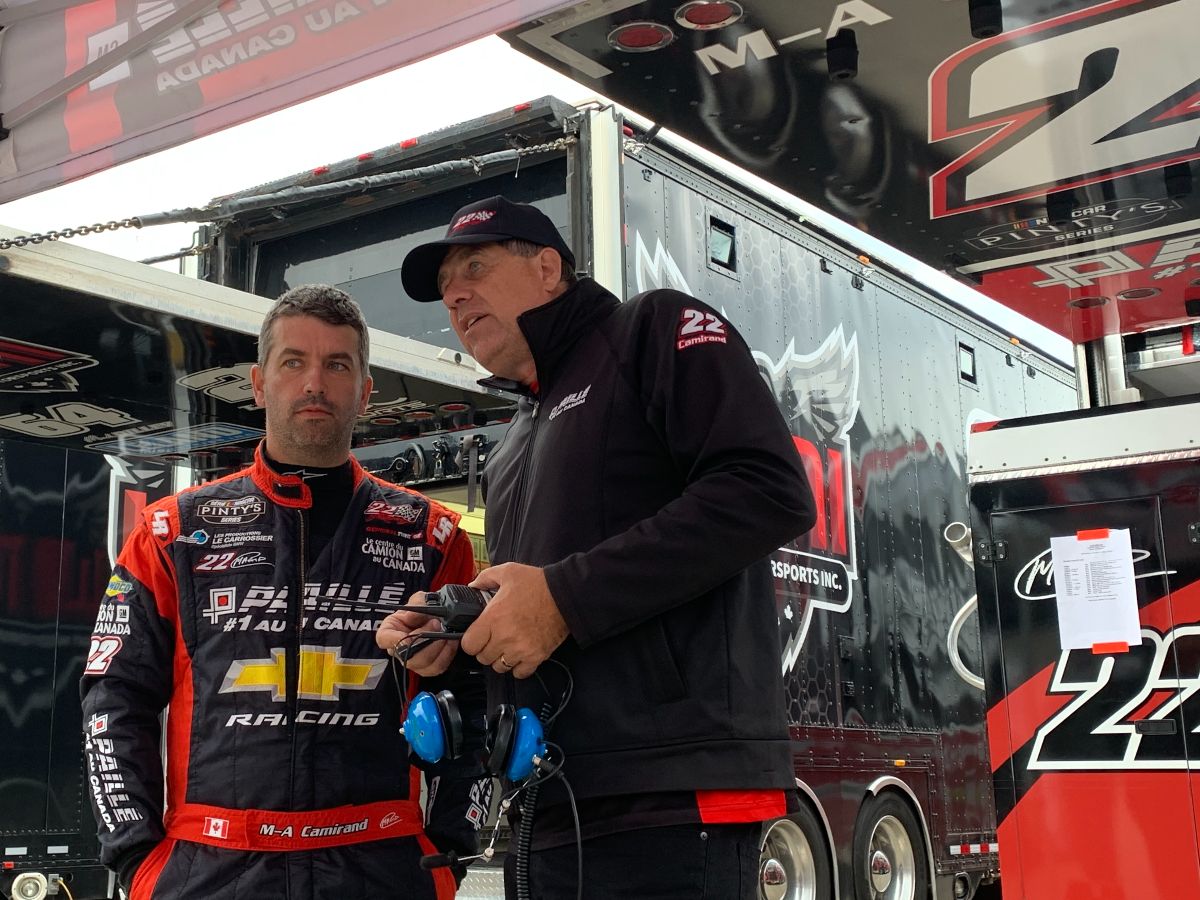 “After maintaining a consistent pace in the dry and wet I felt we had a car to take a podium finish in front of my Quebec supporters. said Camirand. “We’ll investigate what happened and focus on next weekend at Canadian Tire Motorsport Park.’ he added.

Meanwhile, Tagliani had begun his charge back to the front setting up the No 18 Rona / Viagra / St Hubert Chevrolet Camaro for an exciting NASCAR overtime restart that saw Tagliani attempt a three-wide pass heading into the first corner battling for third. He would cross the start finish line in fourth securing the driver’s championship points lead.

“Once again, the 22 Racing RONA-Viagra-St Hubert Chevrolet Camaro was well prepared.” said Tagliani. “We still need to address some minor braking issues ahead of the next two rounds at Mosport (CTMP) next weekend to ensure we have an excellent car throughout the race and when it counts, at the finish line.”

A frustrated Lapcevich made the most of his seat time demonstrating once again that whether he’s learning a new road course or adapting to racing in the rain he’s up to the challenge. “This was a tough one to swallow” said Lapcevich. “I had the rain figured out and we were one of the best cars out there.” 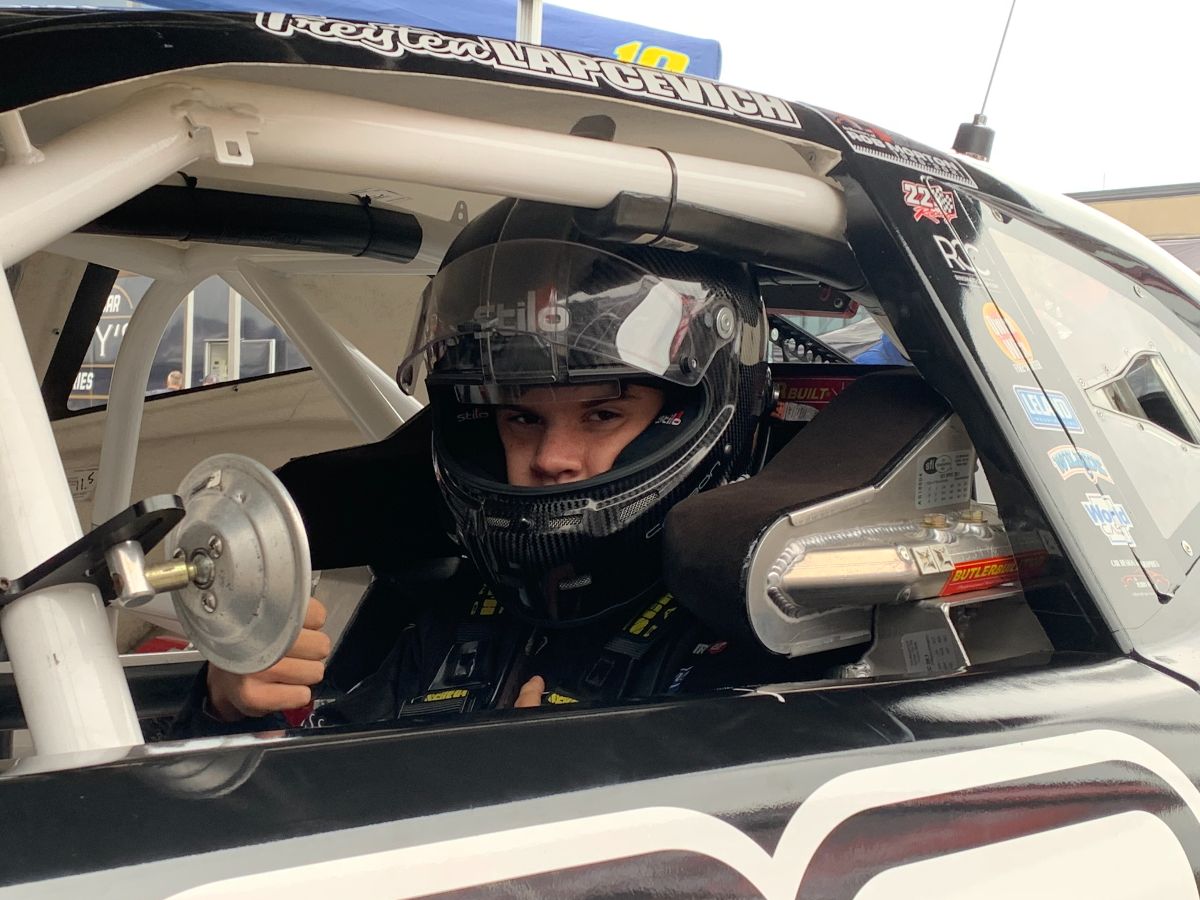 All three drivers were looking forward to racing the doubleheader at Autodrome Chaudiere however, due to inclement weather forecasted for Sunday’s NASCAR Pinty’s Series Canadian Tire 150 and General Tire 150 they had to be rescheduled. Plans to reschedule both races are ongoing and will be announced when finalized.

Not only will Tagliani be leading the Championship points race as the NASCAR Pinty’s Series team’s head to Canadian Tire Motorsport Park this coming weekend, 22 Racing team owner Scott Steckly leads the 2021 NASCAR Pinty’s Series Owner standings and Lapcevich continues to lead the Jostens Rookie of the Year point standings.