by KBM Motorsports
in Breaking News
0

The 24-year-old driver will be filling in for Cody Coughlin, who was originally scheduled to make his NASCAR Camping World Truck Series road-course debut in the No. 51 Tundra but with KBM’s blessing will instead be headed to the high-banks of Winchester (Ind.) Speedway to continue his quest at Late Model history. Coughlin has five total wins so far this year between the ARCA/CRA Super Series and JEGS/CRA All-Stars Tour, and leads the points in both divisions. No driver has ever won both Champion Racing Association championships in the same season. 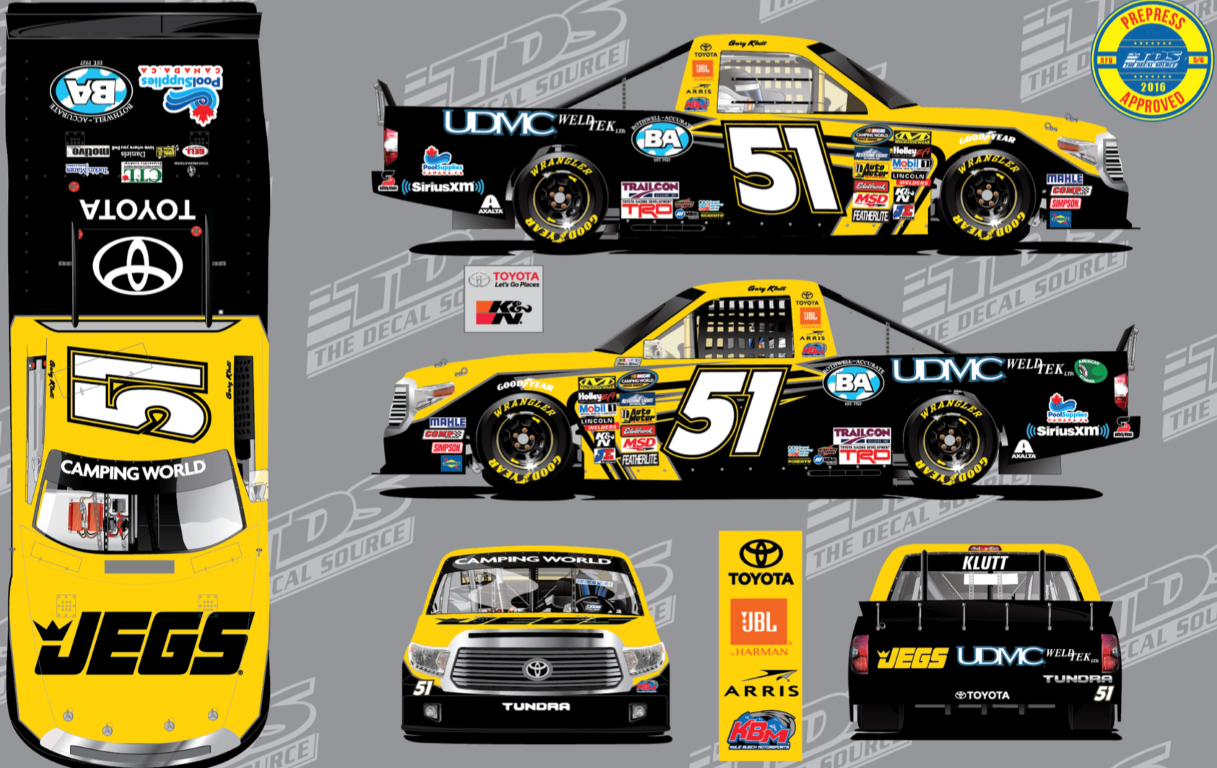 Klutt is currently in his second season driving full-time in the NASCAR Pinty’s Series (NPS). He won the 2015 Pinty’s Series season opener at Canadian Tire Motorsport Park (CTMP) and overall has four top-10 finishes in six starts at the 1.37-mile road course. The NASCAR Next product captured the NPS Series Rookie of the Year honors and finished fifth in series points in 2015 after recording one win, two poles, one top-five and seven-top 10 finishes across 11 starts.

In addition to JEGS, Klutt is welcoming a new partner for this race, UDMC/Weld-Tek Ltd., as well as his NPS team partners Bothwell-Accurate, Trailcon Leasing, Poolsuppliescanada.ca, CTL, Thermal Technologies Services Limited for his Truck Series debut.

“Ever since 2013 when I first saw the trucks run in Canada, I knew that I had to get in one and this year everything just came together,” said Klutt. “This is an incredible opportunity and first off I have to thank Cody Coughlin and everyone at JEGS. I also need to thank Kyle Busch, Bono (Kevin Manion, crew chief) and everyone else at KBM who are working hard getting my Tundra ready for next week.

“I am proud to make my NASCAR Camping World Truck Series debut with one of the top teams in the sport. It means a lot to have the support from Kyle Busch Motorsports, the No. 51 team and JEGS for this next step in my racing career. It’s going to be a special moment to return to the place where I earned my first win last year in the Pinty’s Series, and I hope to make another trip to Victory Lane next weekend.”

Erik Jones won last year’s Truck Series event at CTMP driving for KBM and overall the team has produced four top-five finishers in the three years that the Truck Series has raced north of the border.

About Kyle Busch Motorsports: Since debuting in 2010, Kyle Busch Motorsports (KBM) has quickly established itself as one of the most successful teams in all of NASCAR. Owned by Sprint Cup Series champion Kyle Busch and fueled by his passion for winning, the organization holds Camping World Truck Series records for most career wins (52), most wins in a single season (14 in 2014) and most Owner’s Championships (four). Erik Jones earned the organization its first-ever Driver’s Championship in 2015. In 2016, Sunoco Rookie of the Year candidates Christopher Bell and William Byron will each compete full-time while Daniel Suarez and Cody Coughlin will share driving duties behind the wheel of the No. 51 Tundra. KBM prepares a fleet of race-winning Toyotas out of its state-of-the art 77,000-square-foot facility in Mooresville, N.C. Fans can stay up-to-date with all the latest KBM news online at www.KyleBuschMotorsports.com, by liking the team on Facebook (KBMteam) and by following the team on Twitter (@KBMteam), Instagram (KBMteam), and Google+ (+KBMteam).

About JEGS.com: In 1960, Jeg Coughlin Sr. founded JEGS as a small speed shop. It has grown into high-performance powerhouse that includes a race team – Team JEGS, 250,000 square foot warehouse, retail store, mail order, and website. The 350+ employees at JEGS still strongly believe and practice our simple business philosophy. Customer Care is #1. Visit JEGS.com for all your automotive performance needs.

About UDMC/Weld-Tek Ltd: UDMC/Weld-Tek Ltd. opened for business nearly a century ago as a dairy equipment supplier for a thriving dairy industry in Western New York., UDMC/ Weld-Tek Ltd. has broadened itself into a full service company committed to bringing the most innovated process systems to the Dairy, Food, Beverage and Cosmetic, Domestic and Global markets. I guess you could they have come a long way since 1923 and take a back seat to no one.

About Bothwell-Accurate: With over 85 years in the business and more than 50,000 completed projects, we are one of Canada’s oldest and most experienced construction firms. We proudly service our growing roster of industrial, commercial and institutional clients providing innovative, superior installations for all roofing, waterproofing and architectural metals.

Jackson Back In Action At GP3R