Ashton VanEvery and Brett Stratford drew front row starting spots for the 25 lap A-Main with Dykstra and Lucas Smith in row two. Disaster struck for Darren Dryden before the race even started, as he could not get the engine fired in his car; Dryden entered the night fifth in points. Stratford took the lead in turn one when race started, while Dykstra quickly moved into second and Smith took third.

Dykstra caught Stratford just as heavy traffic began to factor into the race, but the yellow flag appeared for a Darrell Pelletier spin with eight laps complete. Dykstra sailed around the outside of Stratford in turns three and four after the restart and took off, while Smith quickly took over the runner-up spot. Dave McKnight brought out the next yellow flag when his top wing flipped over backwards; McKnight had flipped in his heat race and his crew had replaced the wing before the A-Main began.

Dykstra held the lead for the rest of the race to claim his 10th AST win of the season, while Smith took the runner-up spot and Allan Downey moved up to take third from row eight. Stratford finished fourth, followed by Eric Gledhill, Steven Beckett, Nick Sheridan, Dereck Lemyre, Dale Curran, and Rob Neely. Heat races wins were claimed by Smith, Downey, and Dykstra, each earning $100 from the Friday Night Thunder TV crew.

SATURDAY
Allan Downey was in the right place at the right time on Saturday night at Humberstone Speedway. Downey inherited the lead in the second night of The Fall Classic after an incident on lap 19. The university professor stayed up front to claim his first Pinty’s Action Sprint Tour win of the season and cut into Jacob Dykstra’s championship points lead in the process.

Brett Stratford and Rob Neely drew front row starting positions for the 25 lap A-Main, and Stratford took the lead with Darren Dryden in tow. Those two opened a gap on the field while Neely, Downey, Austin Roes, Dykstra, and Lucas Smith raced closely for spots in the top five. Dryden was just about to mount a challenge for the lead on lap eight when an Ashton VanEvery spin brought out the yellow flag.

Stratford continued to hold Dryden off after the restart, while Dykstra took over third from Neely and began to reel in the two leaders. Dykstra then went after the second position, but Dryden fought off the challenges as the leaders began to approach traffic. Both drivers closed in on Stratford as the traffic became heavy, and a wild exchange on lap 15 ended with Dykstra making contact with Matt Hill; Dykstra’s car suffered suspension damage as a result of the contact, and the situation went from bad to worse for Dykstra when his left front wheel went under the inside guardrail and did even more damage.

A new challenger went after Dryden and Stratford after the restart, as Lucas Smith had inherited third from Dykstra. Downey had fallen outside the top five at that point, but began to move forward again while Nick Sheridan stayed close behind Smith. Smith slid Dryden for the second position with ten laps to go and worked to track down Stratford, while Sheridan and Dryden raced for third.

Smith was right behind Stratford with seven laps to go and made slight contact with Stratford’s rear nerf bar in turn one; it was enough to send Stratford into a spin, and Dryden got the worst of the resulting chain reaction as he was collected by Stratford’s spinning car end flipped end-over-end in turn two. Sheridan also caught a piece of the incident and suffered minor top wing damage, but he and Stratford both kept moving while the red flag came out for Dryden.

Officials determined that Downey, who was running fifth at the time of the incident, was the first non-involved car and he was given the lead for the restart while Smith was sent to the rear. Stratford and Sheridan were given the second and third positions for the restart, while Dale Curran and Rob Neely inherited top five positions. Meanwhile, Dykstra’s crew had made repairs and he rejoined the race several laps down. Dykstra’s bad night continued when he and Ryan Hunsinger tangled in turn three, which resulted in more damage to Dykstra’s front end and finished his night.

Downey cruised to the win by 1.2 seconds after the final restart, while Stratford and Sheridan nursed their damaged cars home to finish second and third. Curran took fourth after starting in row six, while Dereck Lemyre made a late charge to take a top five in the final race of his lengthy career. Eric Gledhill, Neely, Jonah Mutton, Joshua Hill, and Dan Nanticoke rounded out the top ten. Heat races wins were claimed by Dykstra, Roes, and Downey, each earning $100 from the Friday Night Thunder TV crew. 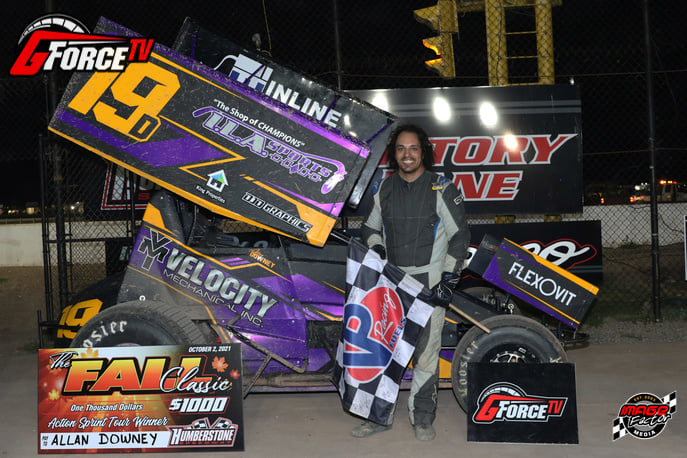 The Action Sprint Tour will finish the 2021 season and crown a champion at Brockville Ontario Speedway’s Fall Nationals weekend coming up on Friday, October 15 and Saturday, October 16. Visit www.actionsprinttour.com for more information.