In the Can Am Stock/Super Stock Series, 23-year-old Ryan Boniferro took his Nostalgia Super Stock 1969 Plymouth Barracuda to a runner-up finish on Saturday and then all the way to the event win on Sunday.

On Sunday,  Boniferro marched through a tough field including wins against Pierce Jones, Bob Andrews, Quinn Berry, Pete Fedun and Kirk Vanni in the final round.

The highlight of the weekend though was winning the King of the Hill Shootout on Sunday night against three-time series champion Rob Becker.  Boniferro had a slight advantage on the starting line and carried it through to the stripe where he took the win.

“Winning the shootout was like icing on the cake,” said  Boniferro . “I would like to thank the Can Am Series for giving me the opportunity to race in such a great series, with such great fellow competitors.”

Boniferro has been to final rounds before, but not in the Can Am Stock/Super Stock Series. “I want to thank my mom (Cathy) and dad (Joe), my wife Anastazie and my brothers (Joe, Pat and Nick) for their continued support,” he added. “Also Joe’s Transmission, Boniferro Speed and Custom, St Catharines Concrete Forming, Rosehill Auction House, The Balancing Act, Heads Up Racer, TT Fabricating and Bubba’s Best Buys for all their help.”

He also mentioned how much he appreciated the staff at St. Thomas Raceway Park for their hospitality and for preparing the track as well as they did. “And also Tom Kovacs Electric for putting up the purse for the shootout!” Boniferro added.

Ryan’s car has been in the family for 30 years and was originally raced by his father. It has a 440 for power and a 3 speed transmission. 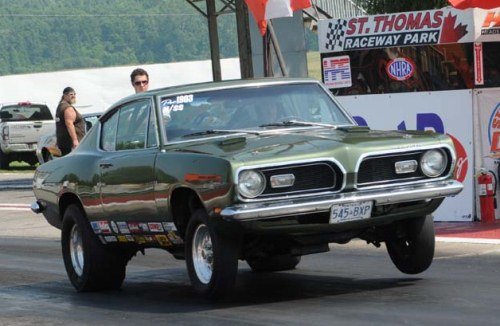 In the Joe’s Transmission TNT Super Series, Jim Thomson also took his 1972 Chevrolet Nova to a runner-up finish on Saturday and then got his very first series win on Sunday.

Thomson battled through the likes of Harry Phelps, Kirk Parry and Roy Lister on his way to the final round.

There he faced a tough competitor Tom Coonly from Blasdell, NY.  Thomson cut down the tree with a .004 reaction time to Tom’s .034 allowing him plenty of room at the stripe to take the win running a 7.014 to Tom’s 7.015.

Thomson now has all but locked up the 2012 Tim Thorne Rookie of the Year Award presented by Sam LoVetro Automotive.

“I want to thank my wife, RaeAnn and my boys, Jimmy and Curtis for supporting me along with friends like Kevin Goodacre and Joe Boniferro and his boys for all the help and support,” Thomson said.

Thomson refers to himself as a low budget racer and is very appreciative of the support he gets from Joe Boniferro (Boniferro Speed and Custom), Kevin Goodacre (Badlands Racing), his brother Rob (Four Seasons Roofing) and Gerry Bartel (The Balancing Act).

“I raced a long time ago and got out of it to raise a family. But after my boys grew up and moved out it was time to look for a car. I found this Nova in Windsor that needed a bit of work and it turned out to be a car originally owned and raced by Russ Parker.”

OSCAAR and Super Stocks To Visit Flamboro Speedway in September