by Greg MacPherson
in Comments & Features
0

In this week’s Motion Motorsport Report, Dave Mathers covers championship night at Delaware Speedway, NASCAR at Bristol, looks ahead to the Fall Brawl at Delaware and more.

DELAWARE SPEEDWAY: Championship night lived up to all the pre-race hype and all four classes had excitement for the fans. The Bone Stock class saw 33 cars take the green flag for their feature.

Number 2 points racer Jeremiah Rabideau got bumped around early but recovered for a 4th place finish behind both Lawrence brothers and Phil Givens and just ahead of Jay Cox. Jeremy Taggart got the win in the V/8 Stock class over Lance Groshok and Ethan Orr.

Two championships were wrapping up Friday night and the Super Stock class had the tightest battle. Going in, Pete Vanderwyst had a slim lead over Jay Doerr.

Doerr started 8th with Vanderwyst 10th. Apparently in the driver’s meeting the Race Director did NOT quote that famous NASCAR directive: ‘if you take out the points leader, you had better go back and take out ALL the other top ten cars’ – as Pete got taken out not once but twice, with the second hit sending him to the garage.

Doerr got the lead on lap 6 and held on right to the end, picking up the win ahead of Lane Zardo, Trevor Collver, Chase Pinsonnault and Shawn Chenoweth.

The other championship was for the Late Models with Ray Morneau (Featured image at top) having a virtually uncatchable points lead over Connor Pritiko.

Kyle Steckly picked up the race win ahead of Pritiko, Jesse Kennedy, Morneau and Matt Robblee and as a result slipped past Pritiko for second in the points with a one point cushion on Pritiko.

Matt Robblee finished 4th in the points with Darrell Lake 5th. Even legendary driver from ‘back in the day’ Wayne Keeling made a ‘cameo appearance’ in the main!! Getting ready for this weekend, perhaps?

APC SERIES: Their next race is at Delaware, Friday and Saturday, part of the APC/Pinty’s Fall Brawl weekend.

NASCAR PINTY’S SERIES: Their next race, the season’s finale, is this Sunday at Delaware Speedway, part of the big APC/Pinty’s weekend. BE THERE!!

FLAMBORO SPEEDWAY: Their next big race is Frostoberfest, Oct 1 & 2.

LOCAL DRAG RACING: I will be adding big events only for the three local drag strips as they run regular bracket races each and every weekend.

GRAND BEND DRAGWAY: Their next big race is the No Club Season Closer this weekend.

ST. THOMAS DRAGWAY: Their next big race is the Ontario Gassers this weekend.

TORONTO MOTORSPORT PARK: Their next big race is the Canadian Sports Compact Series this Sunday.

ROAD TO INDY: News from Canada’s Rob Howden that rising Canadian road racing star Mac Clark won the USF Juniors title at COTA this past weekend. Clark is the first Canadian ever to win a Road to Indy title and will receive a $222K scholarship to run USF2000 next year.

NASCAR CUP SERIES: ‘It’s Bristol Baby’!! And that means cars going so fast on the shortest track on the circuit that it is hard as a spectator to follow ALL the action. Aric Almirola got the pole over Chase Briscoe, both in Fords, with Alex Bowman (Chev) 3rd.

On lap 42 both JJ Yeley and Harrison Burton had flat tires bringing out the first caution. On lap 92 Almirola spun and at the same time Ryan Blaney had a flat tire. Blaney appeared to exit his pit too quickly and he lost a wheel. He returned to his pit, got another tire and went back out.

BUT his problems continued as it appeared that he had damaged the rear suspension as he came back in with another flat and the car seemed to be bottoming out. On lap 139 Burton had another flat tire. Do you see a pattern here?

On lap 179 last week’s winner Bubba Wallace came in after smoking on track. It appeared that a power steering hose pump had split, and the right front tire was dripping wet on the inside when it was removed from the car.

On lap 196 Burton had another flat right front and got up into the wall bringing out the laundry. Erik Jones came on the scene at full song and spun to avoid a slowing car. Jones continued on. Martin Truex in another Toyota had power steering hose problems as well and dropped out on lap 201. Denny Hamlin indicated that he too was having power steering ‘issues.’

So, the Fords are having tire problems and the Toyotas are having power steering issues. Hmm.

On lap 235 Denny Hamlin got a flat tire and scrubbed the wall with little or no damage bringing out a fifth yellow. Lap 270 – oops, another Toyota, this time Kyle Busch into the wall and out of the race but apparently due to a blown motor. And the crowd clapped? A little harsh perhaps? In his walk back to the hauler he would not remove his helmet and would not talk to reporters. He did come out later for a TV interview.

On lap 278 CHAOS!!! Daniel Suarez got squirrely coming out of the corner hitting Ricky Stenhouse and collecting Austin Dillon, Landon Cassill, Tyler Reddick and ‘others’!!

On lap 351 Erik Jones got a flat tire bringing out another caution flag. Soon after another Toyota, Ty Gibbs went to the garage. Up front Brad Keselowski and Kyle Larson were playing bumper tag it seemed!! And then on lap 415 Keselowski had a right front tire go flat but he got safely off track with no yellow.

On lap 436 Christopher Bell got a flat causing another yellow. The last 60 laps ran drama free and Chris Buescher grabbed the win ahead of Chase Elliott, William Byron, Christopher Bell and Kyle Larson. It was an endurance race rather than a Cup race with all the tire and engine problems.

Chase Elliott leads Joey Logano by 15 points and Ross Chastain by 20 in the revised playoff points.

NASCAR XFINITY SERIES: Ty Gibbs (Toyota) nabbed the pole Friday night at Bristol Motor Speedway ahead of Josh Berry and Justin Allgaier both in Chevs. It didn’t take long for the first yellow as Nicholas Sanchez had a flat tire on track.

On lap 14 Sheldon Creed appeared to come down on Riley Herbst causing Riley to get a little sideways but kept going. Nevertheless, they still ‘put it out’!! On lap 36 Sanchez looped it again. On lap 45 Brandon Brown spun on the back straight.

Business really picked up on lap 129 when Noah Gragson bumped Gibbs up into Sheldon Creed who hit the wall hard and was out of the race. There were a couple of more yellows but nothing serious. Gibbs won Stage 1 while Allgaier won Stage 2.

Gragson did not change tires on the last caution, 30 laps from the end, and held off Brandon Jones and Austin Hill for the win.

Gragson leads Gibbs by 13 and Allgaier by 18 in the playoff points.

Friesen got BAD loose on the start and slipped back in the pack. The leaders were lapping back markers only 15 laps into the race. On lap 27 Spencer Boyd got into the wall but, surprise, surprise, no yellow!!

On lap 39 Josh Reaume, Rajah Caruth and Blaine Perkins got together after Reaume spun in front of them and Caruth spun into Perkins. On lap 86 Connor Mossak spun creating another yellow session. With 50 to go Chris Hacker looped it and then with 22 to go Dean Thompson spun. Chandler Smith won both Stages. Ty Majeski won the race over Zane Smith and Parker Kligerman.

Chandler Smith leads Zane Smith by 3 points and Friesen by 15 in the playoff points.

FORMULA ONE: Their next race is Singapore on Sunday October 2.

Brittany Force continued her run of qualifying number in Top Fuel but unfortunately, she lost in Round 2 to Antron Brown. However, teammate Austin Prock picked up the win for John Force Racing beating Justin Ashley in the final.

In a similar fashion Brittany’s other teammate Robert Hight qualified ‘number one’ in Funny Car but marched right through the field taking out Tim Wilkerson in the final.

Bo Butner grabbed the top spot in Pro Stock but lost to Troy Coughlin, Jr. in the second round. Coughlin then lost to ‘number two’ qualifier Erica Enders in the final.

In Pro Stock Bike Joey Gladstone qualified 8th but took out low qualifier Matt Smith in the second round and then beat Angie Smith in the final.

In Factory Stock Showdown action David Barton, a driver with a last name forever connected to bad fast SS/AH hemi cars, marched through the field from his number one spot and took down Aaron Stanfield in the final.

Will this class be an affordable replacement for the current insanely expensive Pro Stock class?

It is much closer to the original intent of Pro Stock than the current one. And the best part you ask? You can actually buy these cars from the manufacturers!! And they actually look like the cars on the street!! Just saying!

In the Countdown to the Championship Points in Top Fuel Justin Ashley leads Force by 9 points and Mike Salinas by 10.

In the floppers Hight leads Matt Hagan by 81 and Ron Capps by 84.

Enders has a similar 81-point lead in Pro Stock over Greg Anderson and 88 ahead of Kyle Koretsky.

Gladstone has a 29-point lead on Matt Smith in Pro Stock Motorcycle with Steve Johnson 42 back.

Barton has a commanding 116-point lead in Factory Stock over Bill Skillman and 124 on Stanfield.

Their next race is Charlotte zMax Dragway this weekend on Fox Sports Racing at 3.

MY ‘VIEW’: Delaware Speedway did something really cool Friday night. They made up plaques with a piece of the replaced asphalt to give to Steve Robblee, Jamie Cox and Ray Morneau. 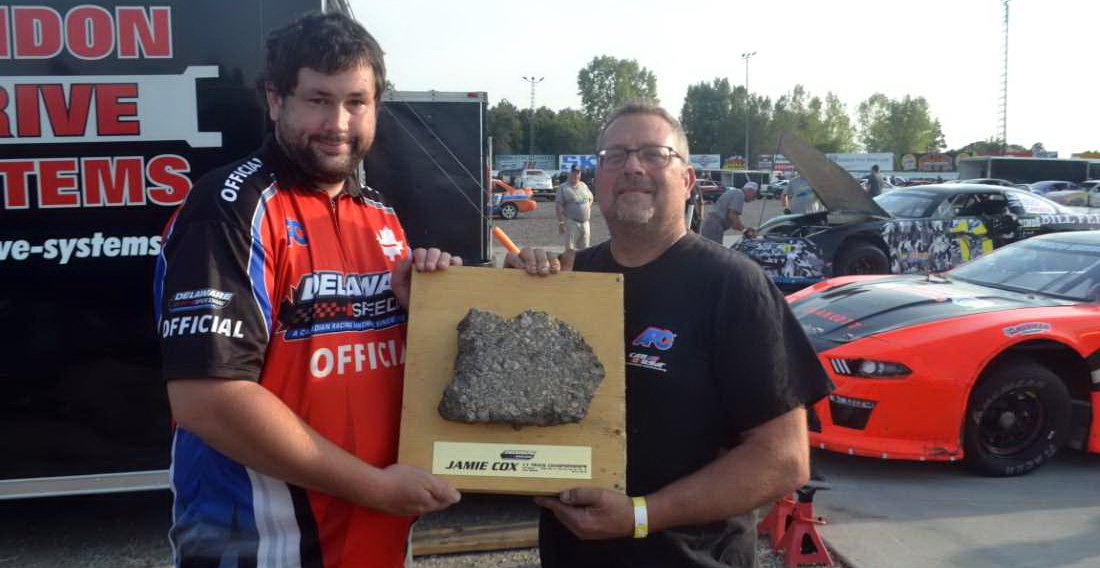 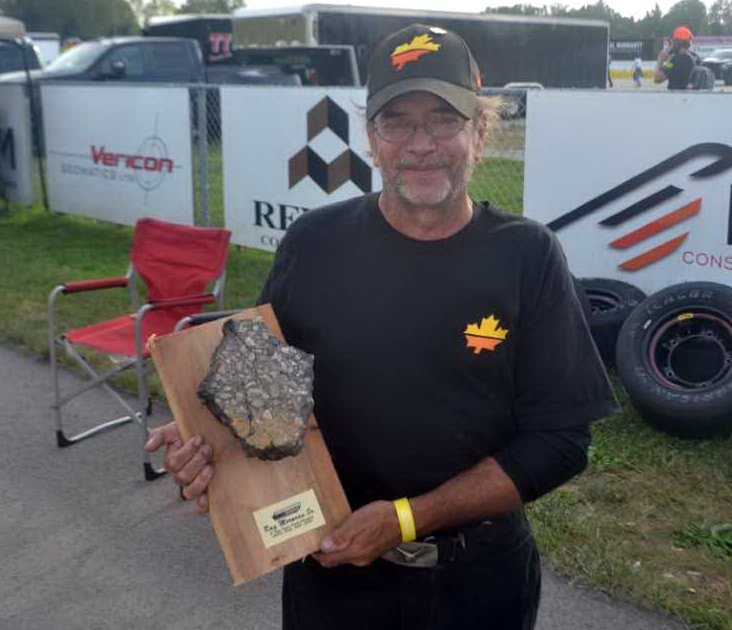 Jackson Geared Up To Brawl