William Byron, driver of the #24 Liberty University Chevrolet, and Christopher Bell, driver of the #20 Rheem - WATTS Toyota, lead the field on a pace lap prior to the NASCAR Cup Series Dixie Vodka 400 at Homestead-Miami Speedway on October 23, 2022 in Homestead, Florida. (Photo by Sean Gardner/Getty Images)

Dave Mathers comments on NASCAR’s punishment of Bubba Wallace, the weekend’s action at Homestead-Miami Speedway, F1 at COTA and more.

MY OPINION: NASCAR suspended Bubba Wallace for one race after his litany of transgressions at Las Vegas. For anybody who missed it on lap 195 Kyle Larson went below two cars, Harvick and Wallace, and then slid up close to Bubba Wallace but did not touch him.

Neither car lifted and Bubba bounced off the wall and then spun Larson. Wallace then turned down and drove at Larson at the bottom of the track wrecking both of them and taking out points contender Christopher Bell in the ensuing melee.

Wallace then got out of his car, walked across a LIVE TRACK over to Larson, and pushed Larson several times. He reportedly repeated the shoving in the Infield Car Centre.

He also pushed a NASCAR official, live on TV. He then claimed that hitting the wall ‘broke his steering’ yet replays clearly showed his wheels turning to head down track. I recall a race several years ago where a driver spun another car and got a two-race suspension.

What bothers me is NASCAR’s inconsistency with their penalties. In the NASCAR post-race penalty sheet for Vegas, Bubba was suspended ONE race for deliberately wrecking two other cars.

Meanwhile, in the same report, the crew chief and two crew members of Kyle Busch’s car were suspended for FOUR races for the loss of a tire. And the crew chief for Jeremy Clements in the Xfinity Series was FINED $25,00, SUSPENDED for a race and the team lost 40 Driver and Owner points for a ‘body modification.’
Bubba – no fine, no lost points!! Huh? Consistent? Sadly, Wallace now has a BIG target on his back going forward. Any hope of another driver giving him a break has flown out the window.

And, speaking about Larson, he got thrown completely under the bus a couple of years ago when he dropped the ‘N’ word during a private online video race. The word that can be heard in any rap song resulted in what was basically his death sentence from the sport. And take a wild guess which Larson sponsor called for his firing? McDonalds!! Hopefully history will repeat itself!!

THE EARL ROSS MEMORIAL – RACING LEGENDS REUNION: In a final wrap-up for this great event, a little background is in order. Promoter Bill Daniels, whose sister is married to Ken McKichan, discovered that there was very little material about Earl Ross in the Ailsa Craig Museum. 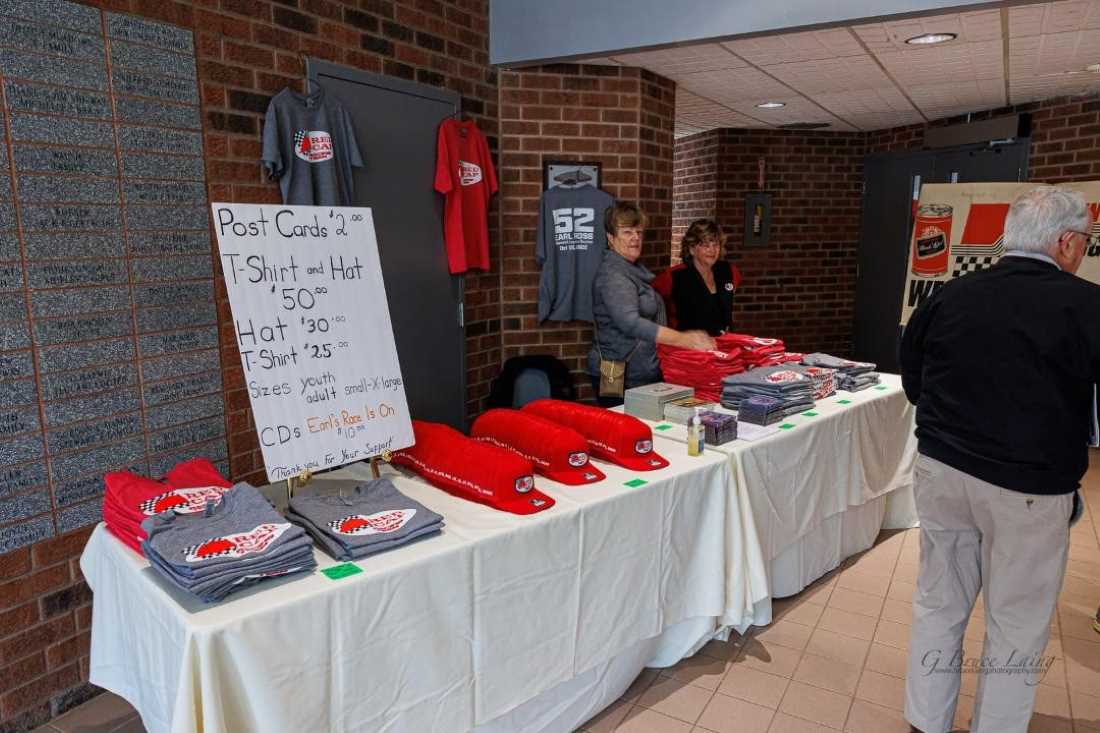 He felt, as do I, that Earl had put Ailsa Craig on the map, so to speak. In discussions with the museum board, he presented the idea of a fundraiser and the addition of a larger Earl Ross display. Deal!! The rest is history!!

Two of the promotional items on display, for sale, were T-shirts and hats. Many people expressed disappointment that they missed the event. This, then, is your chance to pick up some souvenirs; Earl Ross ‘loot’!!

The hats are available for $30/each and the T-shirts for $25/each. Contact Bill Daniels (billdaniels49@live.com) or the museum (northmiddlesexhs@gmail.com) to get yours before they are gone.

NASCAR CUP SERIES: I have to say that today’s version of the track at Homestead-Miami Speedway is MUCH better than the version I saw at the IndyCar/CART (I can’t remember which) Spring Training in 1996.

While in Florida, for all of Speedweeks, I noticed the posting for the event and we drove down. I was shocked!!

The developer/promoter Ralph Sanchez in 1996 thought it would be a really good idea to copy a nearly 100 year old track, Indianapolis Motor Speedway, as apparently he wanted an IndyCar/CART race.

Square corners and little banking!! Doh! Fortunately, after a couple of attempts, they got it right, REALLY right. The palm trees outside the back straight are really cool. I must say I still associate Homestead with the final race of the year but, apparently, that honour has now fallen to that epicentre of racing, Phoenix!! LOL

William Byron (Chev) grabbed the pole with Christopher Bell (Toyota) second and Chase Elliott third. John Hunter Nemechek, filling in for the suspended Bubba Wallace, brought out the first yellow on lap 27 when he spun.

Chase Briscoe brought out the second caution with 4 laps to go in the 2nd stage when he spanked the wall and spun down the track. On lap 211 Ryan Blaney overcooked pit out and got onto the grass spinning and causing a caution.

With 23 laps to go, Tyler Reddick bounced off the wall for yet another yellow. During the ensuing pit road action, it appeared that Martin Truex, Jr. overshot his pit and stopped in the big lane instead of moving down, and got spun by Kyle Larson.

He was thus backwards in his stall and had hit the jack, tire and airgun on the way. MUCH discussion ensued with Coach Gibbs clearly concerned. In the closing laps, Ross Chastain made a bunch more friends going both high and low blocking including a couple of times into the wall.

Meanwhile, Truex came back up through the pack and was fighting hard with teammate Denny Hamlin who was on the bubble in the points. That should make for an interesting team meeting!!

At the flag, it was Kyle Larson leading 199 laps and more than making up for last week. He was in the Winner’s Circle while his protagonist, Wallace, was in the Penalty Box!! Karma?

Watermelon ‘Boy’ Chastain finished second, with Dinger third, in the same spot he finished in the Xfinity race on Saturday.

Joey Logano has a 21-point lead over Chastain and a 22-point lead of Chase Elliott in the Drivers Points.

Their next race, Martinsville, is Sunday at 2 P.M. on TSN 3.

NASCAR XFINITY SERIES: Trevor Bayne (Toyota / and the in car TV commentator) started from the pole ahead of Noah Gragson (Chev) and Ty Gibbs (Toyota).

The big question for the race was could they duplicate the truck race and have no cautions. Nope!!

Three laps in, the laundry came out when JJ Yeley appeared to slide up into Riley Herbst collecting Jeb Burton and David Starr as well. Things ran smoothly after that until another yellow with only 13 laps to go.

Stefan Parsons slid up the track and gathered up Kyle Sieg and Nicholas Sanchez. A big fire from the right front wheel well on the Sanchez car created some excitement.

After the crew stopped using the fire extinguisher and walked away, the camera clearly showed fire still burning inside the opening. Noah Gragson pretty much dominated the race winning both stages and the race 127 of the 200 laps. Gibbs finished second with AJ Allmendinger third.

Echoing the race results Gragson leads Gibbs by 31 and Dinger by 56 in the points.

NASCAR CAMPING WORLD TRUCKS: They said it couldn’t be done but the truckers proved ALL the naysayers wrong at Homestead on Saturday. NO caution flags other than the two for the end of the stages!! Ryan Preece (Ford) got the pole in front of Ben Rhodes (Toyota) and Matt DiBenedetto (Chev). Rhodes won Stage 1 while Zane Smith (Ford) won Stage 2.

Ty Majeski (Toyota) won the race over Zane Smith and Canadian Stewart Friesen (Toyota). The win by Majeski unfortunately knocked Friesen out of the final four.

The four drivers will be Zane Smith, Chandler Smith, Ben Rhodes and Majeski.

Their next race, the final, is at Phoenix, Friday, November 4 at 10 P.M. on Fox Sports Racing

FORMULA ONE: What an incredibly gorgeous facility – the Circuit Of The Americas (COTA) in Austin, Texas. Ferrari grabbed the front row with Carlos Sainz and Charles Leclerc followed by 2022 Champion Max Verstappen in a Red Bull.

But, once again, the Ferrari ‘curse’ struck. Sainz tried to cut low under teammate Leclerc who had beaten him into Corner One but George Russell in his Mercedes was right there and they made contact.

Sainz spun and the damage took him out of the race. Russell was given a five second penalty. Really? Valtteri Bottas brought out the second yellow on alp 18 when he spun into the gravel trap and couldn’t extricate himself.

On lap 22 Fernando Alonso tried an unsuccessful ‘kamikaze’ pass on Canadian Lance Stroll who qualified a very stout seventh and was up to third with the result that Stroll was taken out of the race while Alonso continued.

On lap 35 the seemingly invincible Red Bull team ran into problems when the air gun for the right rear tire malfunctioned causing a long pit stop dropping Max back to seventh from the lead.

Meanwhile the Chinese Water Torture continued as, once again, the stewards tried to screw up a GREAT motor car race by warning drivers about ‘Track Limits’!! Please make it stop!!!

In the closing laps, Verstappen more than made up for the bad pit stop and passed Hamilton for the lead. At the flag it was Max over Lewis and Leclerc. Stroll after his great run finished 18th while Nicholas Latifi started 20th and finished 17th on the lead lap.

Verstappen leads Leclerc by 124 and Red Bull Teammate Sergio Perez by 126 in the points. The win also cemented the Manufacturers Championship by 189 over Ferrari and by 240 on Mercedes.

NHRA: Their next race is Las Vegas Sunday, at 5 on Fox Sports Racing.

FLAMBORO SPEEDWAY: Their next big race is the Halloween Enduro 250 plus Demolition Derby this Saturday.

GRAND BEND DRAGWAY: Their Annual Banquet will be held November 5.

ST. THOMAS DRAGWAY: Their Annual Banquet will be held November 5.

MY ‘VIEW’: Sadly, the racing world has lost a true giant. Red Bull founder Dietrich Mateschitz was 78 years old. He was the owner of both the Red Bull Formula One team as well as Alpha Tauri. His sponsorship and promotion of racers and events all around the world was truly legendary. He will be missed.