In this edition of Dave Mathers’ Motion Motorsport Report, Dave looks at F1’s visit to Brazil, the NHRA finale at Pomona, and more.

FORMULA ONE: Those gasps you hear coming out of the betting locations in Las Vegas were caused by the sprint race qualifying order for Interlagos that nobody, EVER, could have predicted.

How about Kevin Magnussen on the pole in his Haas. And how about Mick Schumacher in his Haas DFL, yup, dead last!!

In Saturday’s Sprint Race, Magnussen (Haas) took off quickly but soon got passed by Max Verstappen (Red Bull). Russell (Mercedes) got around Magnussen and proceeded to have a ‘spirited’ race with Verstappen, finally getting the lead on lap 15 of the 24 laps.

Max radioed that he had run over some debris and started backing through the field, getting passed by Carlos Sainz (Ferrari) and Lewis Hamilton (Mercedes). Stroll finished 17th, after a penalty, and Latifi was 19th.

There were two grumpy former World Champions in the race – Sebastian Vettel for getting bumped by his teammate Stroll and Fernando Alonso for a similar incident with his teammate Esteban Ocon, but the jury is still out on the second one for who did what to who! And to compound the problem, Ocon’s car caught on fire in Parc Ferme!! Ouch.

Count me in as a BIG supporter of Sprint Races!!

Business picked up very quickly on Sunday as Magnussen, Saturday’s crowd favourite with his Sprint win, appeared to come down to block on the first lap and got tagged by Daniel Ricciardo, bringing out a yellow.

On lap 7, Verstappen and Hamilton were well and truly engaged when they made contact, damaging the wing on the Red Bull. Max pitted for repairs and then, in another head scratcher, was issued a five second penalty for ‘avoidable contact’! Really? There was no flag on that incident.

On the same lap, Charles Leclerc appeared to get bumped by Lando Norris sliding off track but, luckily, was able to continue with no flag once again. See NASCAR, it CAN be done!! LOL.

Of course, once again, the stewards ruined a perfectly good motorsport race with their constant postings of ‘the stewards are reviewing the incident yada-yada-yada’.

While the stewards were getting hated, Hamilton was the new favourite driver for the Brazilians; as there are no Brazilian drivers, it appears they wanted a hero and Lewis was that guy!!!

On lap 52 (of 71), Norris spun, apparently from an electronics issue, and beached the car. The safety crew seemed unable to move the car (couldn’t neutral it?) and the pace car led the field for what felt like an eternity.

On the restart, Verstappen, who had dropped back as far as 18th, looked like he was going to be able to continue his magical year but he fell short and finished 6th.

At the checkered flag, it was Russell over Lewis and Sainz (who had qualified second but had a grid penalty move him back on the start). Stroll finished a very respectable 10th, while Latifi was 16th, on the lead lap.

I strongly suggest that Aston Martin make a call to Borla and get a ‘modified’ exhaust system for their pace car as the noise, yes, noise NOT sound, emanating inside the car when the camera clicked on it, was very irritating. Borla has a fix for that!!

There was a very interesting radio conversation between Alpine and Ocon, where it sounded like a parent chastising a child!! Quite funny. They were warning him about not touching teammate Alonso, who was restarting right behind. Alonso got by him and finished 5th, while Ocon was 8th.

In another interesting radio discussion, the Red Bull team asked Max to let Perez past him, in order to help the team’s #2 driver secure second in the championship points. Not only did Max refuse, but he berated his own team, ordering them never to ask him to do that again. Interesting given that Perez moved over to let Max through, earlier in the same race. And oh yeah, Perez kind of helped him win the World Championship in 2021. Talk about a short memory!

As you know, Verstappen has run away with the points lead while, interestingly, Leclerc and Perez are now tied for second.

In the Manufacturer’s Championship, Red Bull has it wrapped up, while Ferrari leads Mercedes by only 19 points after Brazil. Abud Dhabi will decide the runner-up!! Their next race, the season finale, is Abu Dhabi, Sunday at 7.55 a.m. ET on TSN 5.

NHRA: BRUTAL!!! That is the only way to describe the Auto Club Finals at Pomona. Whoever NHRA has entrusted to perform track prep MUST be shown the door. Totally unacceptable.

In seven of eight first round pairs in Top Fuel, at least one car had ‘traction issues,’ while Funny Car saw six of eight pairs with similar problems.

Even Pro Stock, normally slot cars, had three pairings with problems. I usually don’t track Pro Stock Bike but after the two nitro classes, I thought maybe I should.

Kelly Clontz spun her slick in the very first pairing and I thought that it did not look good. But, in round one, she was the only ‘smoker’.

I had to smile at the poor dragracecentral.com guys having to come up with new descriptors for what was transpiring on track. THIS was my favourite – ‘chasing hard until about the 330 lights, where the tires come loose and he has to lift’!! Good one.

Having said that, here is what happened going forward.

Top Fuel saw Brittany Force grab the number one spot, then watch as some of her challengers got put on the trailer in the first round!! Second place runner (going in), Justin Ashley, lost to number four points guy Antron Brown. Number three Mike Salinas lost to Krista Baldwin, while number five guy Steve Torrence lost to Ron August. Both Salinas and Torrence smoked the tires, while Ashley lost a close one in the only pair that went down track side-by-side. Go figure!!

Round 2 saw Force, Austin Prock, Brown and Josh Hart advance. And NO tire smoking!! I guess somebody ‘got the memo’?? Prock beat teammate Force in the semis, then took out Brown in the final.

Capps, Tasca, Cruz Pedregon and Alexis DeJoria advanced, as Team Force did not have a good round. John barbecued his car just past the tree, while Hight went into the spin cycle with his slicks losing to Tasca. I had to laugh at the fact that Canuck Jeff Arend qualified 16th in a 2008 Monte Carlo, 14-years-old!! LOL. Capps beat Tasca in the semis but lost to Pedregon in the final.

Pro Stock saw Troy Coughlin Jr. grab the top spot and four of the top five points runners advance out of the first round, with the exception being Kyle Koretsky.

The usual suspects advanced in round two, except points leader Erica Enders, who took out number one qualifier Coughlin. Enders beat Aaron Stanfield in the semis, then lost to Greg Anderson in the final.

Pro Stock Bike saw Angelle Sampey grab the number one spot, though she is not in contention for the championship. All five contenders advanced out of round one. Sampey lost in round two to Steve Johnson, who lost to Angie Smith in round three. Smith defeated Joey Gladstone for the win.

Brittany Force is the 2022 Top Fuel Champion, with Antron Brown in second and Austin Prock in third.

CANADIAN DRAG RACING HALL OF FAME: Their gala, inducting 17 new members, will be held on Saturday, November 19 in Montreal. 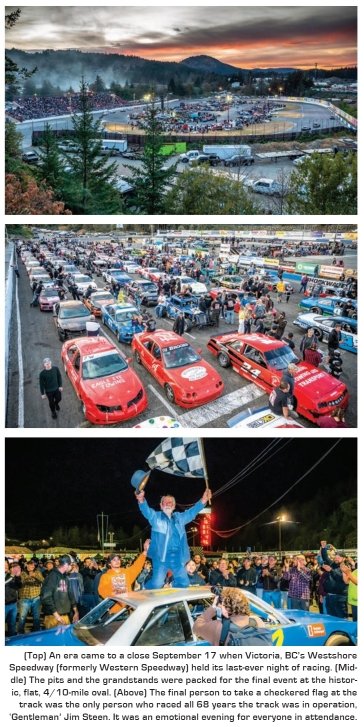 MY ‘VIEW’: One of the coolest stories in the latest print edition of Inside Track Motorsport News is titled ‘Western Speedway Goes Dark’. The reason it’s cool you ask?

Reason one: Gentleman Jim Steen won the final race on the 4/10 mile oval. So? He has raced at the track every year it has been open – 68 years!!

Reason Two: The photos by Don Laidlaw / Wildlight Photography are outstanding. The one of the track at dusk, with the lights on and the sun setting behind the mountains, is amazing.

The photo of all of the race cars lined up, six-wide on the front straight, is equally epic.

Reason Three: Unlike most tracks that are being closed, this one will rise again in a different location. Also, unlike most developers who buy up and close down race tracks, this developer has provided the seed money to build the replacement.

You can see the whole issue, here. The photos I mentioned are on Page 32.