NASCAR Cup Series: It would appear that there are some ‘teething problems’ with the new wheel/tire program. As they no longer utilize the ‘inner liner’ it appears that they drop the car too low when they go flat causing problems lifting the cars for towing off the track.

It seems that pushing the cars off the track is not an option in some incidents. A couple of cars even bottomed out on the banking making them hard to get picked up by the tow vehicles. As for that I’m not sure of their method of towing with straps through the spokes of the front wheels.

I predict some ‘fine tuning’ in the very near future on that little situation! As well the single nut seems to be causing concerns for some of the crews as they ended up with jammed sockets.

And the new cars have produced some very pleasant and unanticipated features. Kevin Harvick spanked the wall HARD in practice and the team was able to repair it without having to pull out a backup as would have definitely happened with the previous cars. It seems the new car is tougher, stronger, ……!!

The race saw a bunch of yellow flags, way more than usual for this track. Cars had tire/wheel problems which caused several drivers to get into the wall.

There was no end of excitement during the race as cars were passing all over the place, top, middle, bottom, etc. At more than one point I counted six cars wide!! Kyle Larson, after ‘inadvertently’ blocking teammate Chase Elliott in the closing laps, made a ‘Hail Mary’ pass on the apron to take the lead and the win.

Austin Dillon finished second with Erik Jones third. The first four cars were Chevs, the next three Fords and finally Kurt Busch in a Toyota. The Joe Gibbs team had a race to forget as they had a myriad of problems including over heating. Their cars finished 13, 14, 15 and dead last (Bell).

Austin Cindric leads the points by 8 over Joey Logano and by 12 over Martin Truex, Jr. after two races.

NASCAR XFINITY SERIES: ENOUGH!!! NASCAR must take a long, hard look at its racing rules and maybe call its rule book ‘to the trailer’ for a BIG penalty.

The debacle presented on Saturday night at Fontana was unacceptable, an insult to all its loyal fans. The ‘green / white / checker’ problem has to be re-examined and should be limited to ONE attempt only.

They are selling entertainment and how would it be if a football game was delayed for almost half an hour because a player knocked over a piece of necessary equipment on the sidelines of the field?

That is what happened when the sand barrels at pit in were hit hard by a sliding Brandon Jones spreading sand all over pit road. This forced the race to go 15 laps over the scheduled distance!

A race scheduled for two and a half hours went to over three hours! The delay caused me to miss the first period and a half of the Leafs game!! That game ended with Toronto getting a touchdown and a field goal while Detroit only got a touchdown (10 – 7)!! LOL

Having said that it was a very competitive and entertaining race with cars going high against the wall and low below the line. Many lead changes added to the excitement.

Action started early with Landon Cassill’s Camaro catching fire, likely from a broken oil line, but the driver was fine. Several other ‘close encounters of the worst kind’ brought out the laundry.

In the end, repeat winner Cole Custer in a Ford got the win over Noah Gragson, Camaro and a returning Trevor Bayne, coming back after an absence of several years, in a Toyota. Canada’s Alex Labbé ended up 24th.

In the points, AJ Allmendinger has a one point lead over Gragson and three points over Justin Allgaier. Their next race, Las Vegas, is this Saturday at 4.30 P.M. on TSN.

NASCAR PINTY’S SERIES: They open their season at Sunset Speedway on May 14.

APC SERIES: This series kicks off May 21 at Sunset Speedway.

NHRA: The magic that NHRA applied to the Pomona racing surface did NOT accompany them to Phoenix!! Friday’s first round of practice should have raised some alarms as only three Top Fuelers got down the track. But apparently not.

Mike Salinas qualified second and marched through field in Top Fuel taking out Shawn Langdon in the second round, super tough Steve Torrence in the Semi and the ‘always smiling’ Antron Brown in the final. Canada’s Todd Paton ended up seventeenth in qualifying just outside the final sixteen. Tires were smoked in seven of the fifteen pairings!!

Matt Hagan qualified Number One in Funny Car, driving for Tony Stewart, while Robert Hight grabbed the Number Two spot. Hight took out Bob Tasca in Round Two, his boss John Force in the Semis before topping Hagan in the final. Traction was a lesser problem for the floppers but still there were five of 15 pairings with ‘loss of traction’ issues!!

Pro Stock saw the usual 6.50 runs and Kyle Koretsky qualified with a 6.520 followed by Aaron Stanfield at 6.521. Kyle lost to Troy Coughlin, Jr. in the Semis but then Troy lost to Aaron in the final. Aaron had taken out heavy hitter and defending champion Greg Anderson in the second round and then Mason McGaha in the other semi.

Mike Salinas leads the Top Fuel points by 22 over Justin Ashley and by 29 over Steve Torrence. In Funny Car Robert Hight leads Matt Hagan by 65 and Ron Capps by 88. Aaron Stanfield leads Erica Enders by 36 in Pro Stock and Greg Anderson by 87.

Their next race is the Gatornationals on March 13 at Gainesville, Florida. Hard to believe that I was at the top of the grandstands there standing (who could sit??) beside Bruce Mehlenbacher, Sr. 52 years ago (1970) at the very first race!! And we heard ALL about the mystery alligator reported to be living in a pond at the side of the pits!!

IMSA: Their next race is The Twelve Hours of Sebring, March 19.

FORMULA ONE: Uh, about that Russian Grand Prix in Sochi scheduled for September 25? I predict a cancellation in it’s future!! Update – DONE!! 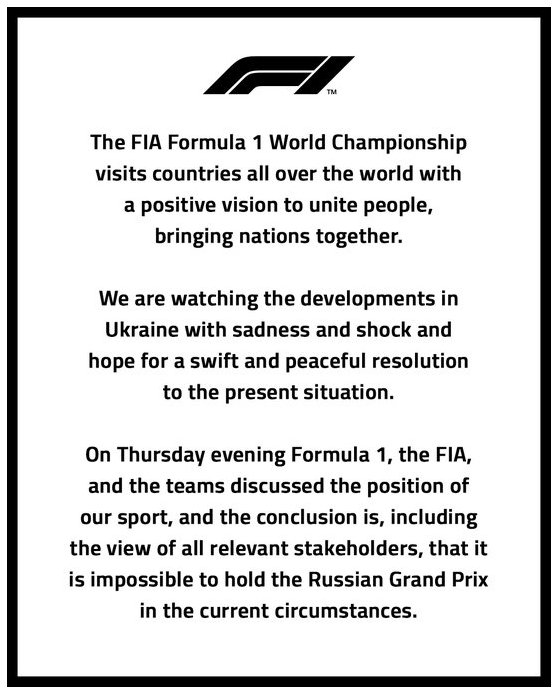 As well, will this be the end of Nikita Mazepin and his father’s Russian oil money? If so, does that mean Gene Haas, upon losing that ‘cash cow,’ might be very interested in selling to Michael Andretti, allowing Michael to save the $200 million ‘buy in’ cost?

They start their season on March 20 at Bahrain.

IndyCar: Wow, what a great way to start a new season!! Incredible racing, Chamber of Commerce weather and ideal racing conditions along with a HUGE crowd (and not a mask in sight!!) Made for a home run.

New Zealander Scott McLaughlin, a driver I have followed in the uber-exciting Australian Supercar Series where he won three championships as well as winning last year’s IndyCar rookie of the year, won the race from the pole in one of series owner Roger Penske’s cars.

Alex Palou, driving for Chip Ganassi, made things very close in the final laps and was a mere half a second back at the checker flag. Will Power was third in another Penske car. Rookie David Malukas got, not one, but two ‘Darlington Stripes’ as he spanked both walls on lap 23 to be the first car to drop out.

Canadian Dalton Kellett experienced ECU issues and was the second and final car to drop out, on lap 62, finishing 25th after starting a strong 14th. Another Canadian, rookie Devlin DeFrancesco, also encountered problems during the race but overcame them to finish 22nd after starting 18th.

Jimmie Johnson? He’s destroying his rich legacy as a seven-time NASCAR champion as he was just a ‘moving chicane’ during this race. Time to hang up the helmet?

IndyCar has improved quite a bit since being bought by Roger Penske and the future of the series looks very positive. Well done.

Their next race is at Texas Motor Speedway on March 20.

Action begins on the ½ mile Five Flags Speedway in Pensacola, Florida (or, as Junior Hanley always calls it, Pepsi-Cola!!) on June 18, the home of the popular long running Snowball Derby.

It is followed by action on the legendary 4/10-mile South Boston Speedway in Virginia, the birthplace for many, many NASCAR drivers. Race three is at another legend, the ½ mile Stafford Motor Speedway, Connecticut owned by the Arute family.

Number four is on the bad fast paved high-banked ½ mile at the Nashville Fairgrounds, Tennessee, the long-time home of the All American 400.

Race five hits the dirt on the 1/3 mile I-55 Speedway in Pevely, Missouri. That is the track owned by Ken Schrader so I fully expect to see him in the race. The final race lands on the dirt at the 3/8-mile Sharon Speedway in Ohio.

CBS will cover all the races live and it will, once again, be a two-hour show with heats and a feature. The full driver lineup will be announced at a later date.