Helio Castroneves' fourth Indy 500 victory was incredibly popular with the fans and his fellow racers.

The Indianapolis 500 – the biggest race in the world – sure lived up to its reputation on Sunday. And Hollywood couldn’t have written a better script. Helio Castroneves, in the AutoNation Sirius XM car won for the fourth time, got a big kiss from Mario, and was followed by Palou and Pagenaud. The old adage, ‘and the crowd went wild’ has never been more appropriate!!

Once again, the start was brutal and too many drivers had trouble on pit road, with several spinning out. Poor Will Power had – wait for it – no power getting out of the pits for the start.

Graham Rahal lost a wheel that apparently wasn’t attached properly. Roger Penske received tremendous applause when he gave the command to start engines. I was so happy for him with the large crowd in attendance. Canadians James Hinchcliffe finished 21st and Dalton Kellett was 23rd.

NASCAR had all three classes running at the beautiful Charlotte Motor Speedway on the weekend. Kyle Larson won, nay, dominated the Cup race starting from the pole and winning all four segments thus giving Hendrick Motorsports its 269th victory and a new all-time record for wins by a Cup team. Hendrick Motorsports displaced Richard Petty Motorsports, which had held the record for many decades.

Four of the top five finishers were Hendrick cars, with Kyle Busch finishing third to spoil a repeat of their Dover top-four finishes.

The Xfinity race had some close racing and several ‘incidents,’ which is to be expected on a track that fast. The most interesting part of the broadcast was the use of Cup drivers only for the announce team, with the exception of Chad Knaus.

And, surprisingly, they did a very good job. And no Mikey Waltrip-style praising of NASCAR all the time!! Young (he looks about 15!!) Ty Gibbs, grandson of legendary owner Joe Gibbs won ahead of Austin Cindric and Harrison Burton. The youth movement is alive and well in NASCAR. And lots of second- and third-generation racers are excelling in the sport.

A very scary wreck occurred when Trey Hutchens slowed coming out of Turn 4 and started coming across the track to head for the pits. Drew Dollar saw him and turned left. Unfortunately, veteran Johnny Sauder – running right on Dollar’s bumper – did not swerve in time and literally tore the side off his truck. Fortunately, nobody was injured and they ‘all walked away!’ 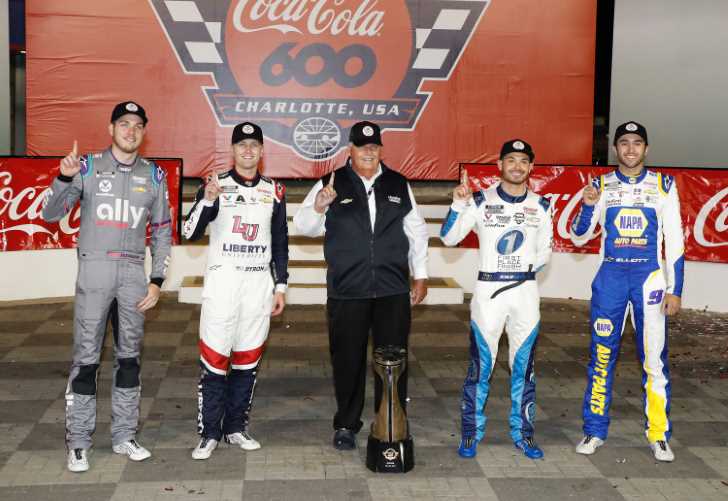 While we’re talking about the Truck race – which is covered on Rogers by our wonderful hybrid Fox Sports Racing (the old Speed Channel/Speedvision) here in Canada – can somebody please explain to me why we are seeing commercials for shows that no longer exist? Race fans are VERY loyal to sponsors and advertisers and we BUY stuff from them. Is FSR missing a golden opportunity here?

In my vote for the ‘best move by a racetrack’ in years, Charlotte replaced the grass in the area between pit road and the trioval with Astroturf. This resulted in trucks (and cars) sliding across it without tearing the noses off as had happened with the grass. Awesome!!

Let’s talk about the websites of the various sanctioning bodies. I will put my personal ratings, one to ten, on them. 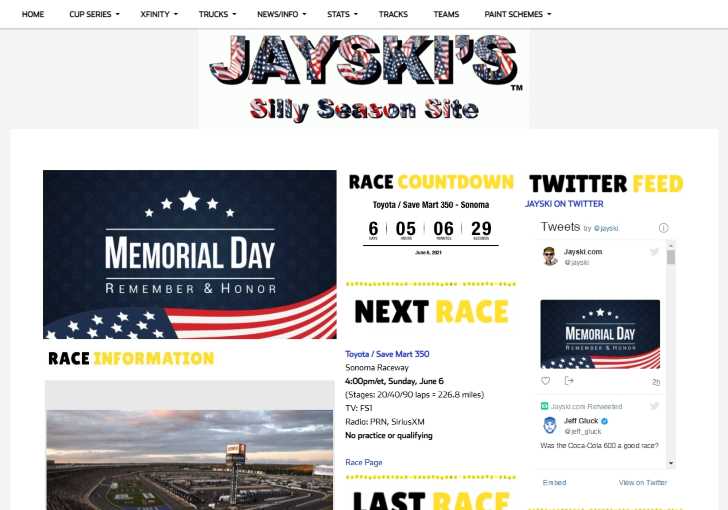 CUTLINE: According to Dave Mathers, Jayski sets the standard when it comes to informative racing websites.

Jayski.com – a FIFTEEN!! Jay Adamczyk has put together the gold standard for all of them and is the go-to site for everything NASCAR!

UPDATED WITH INFO FROM JAY ADAMCZYK (June 2, 2021): “I started it August 26, 1996 and it was updated every day from sometime in 1998 until ESPN unexpectedly pulled the plug on January 28, 2019. ESPN never reactivated it. I was a contractor with them for the 2005 & 2006 seasons. ESPN/Disney bought it in 2007 and owned it until they killed it January 28, 2019. I reacquired Jayski.com, the trademark and most content soon after. Scott (Page) put together a main page and a few links just after, then we signed a deal with NASCAR (after also talking to NBC, Fox and Motorsport.com) to house the site there but run it with 100% control, starting May 13, 2019, and ever since. We have three people who run it: Scott, Dustin and Amanda. I own, oversee and do the stats now.”

NASCAR.com – a five. Only good for Live Timing in my opinion. They are far too focussed on videos, videos, videos, rather than hard information such as lineups and points.

DragRaceCentral.com – a full TEN. Similar to Jayski, it is the site to go to for NHRA results and points.

NHRA.com – a seven. Tough and slow to navigate.

IndyCar.com – a four. Really, really difficult to find what you are looking for.

IMSA.com – a six. Great results and statistics but deep dives are required to get to them.

Formula One – a seven. Great for Live Timing but rather thin in content.

PitPass.com – a nine, the Jayski of Formula One, with great in-depth reporting, rumours and insights.

NASCAR Canada – about a seven. Great real time lap by lap reporting for races that are, sadly, not live.

There are, of course, other sites but those are the ones I follow on a regular basis.

That light at the end of the tunnel is not an oncoming train but rather a big GREEN light coming for local racing. Bring it!

Flamboro Speedway To Open June 19 With The Grisdale Triple Crown